Its time to take care of our planet

It is 7pm and it starts getting dark in the village of Orbais, in Belgium. Inside the house of my parents, there is a cozy and warm atmosphere with the fire burning in the fireplace. Snacks are ready and chairs are set up in one big circle. My sister and I are so excited because tonight 15 people will come to built a common dream and a self-assessment on the issue of Global Warming! 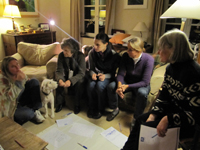 Climate change is an issue that affects all of us. "IPCC anticipates a warming of…
Continue

Selfless love and care for her guru by a true disciple

Let me share a moving and heart touching story of a true disciple from SALT visits facilitated by The Constellation, India Community Life Competence Group and SAMRAKSHA on 25th October 2010 at Koppal in North Karnataka, India.…

Why CLCP is far better than Targeted Interventions (TI)

At the recently concluded CLCP Workshop, for all CARE staff working in EMPHASIS (our project name) held at CARE India office in New Delhi, from 18-21 October 2010, one of the participants asked me an explaination. His dilemma was that if we carried out the Community Life Competence Process there seemed to be an apparent disparity between EMPHASIS (our project) goals and objectives with those of the community. Consequently, I explained that:

In the Targeted Intervention Model…

Why are we still together?

Last month I facilitating review meeting among SALT faciliators at Tasikmalaya District. The district is quite well know I think as the most populous and Islamic conservative community. Some of reproductive and HIV-AIDS promoting program facing challenges from this situation. This beautiful district, however has open minded people . That's is why CLPC promoting last year at the district remind accepted and sustained. ( or even CLCP and SALT able to ice breaking even at very conservative… Continue

Yadi said that I need sport activity to make me spend my spare time to activity that avoid me dating with girl friend. My friend's girl friend is pregnant now because they always go together and then have sex. That statement is from Yadi, 19 years old, a student at Manonjaya Tasikmalaya. He is member of ARC competence established last year at the most moslem community at Tasikmalaya District - West Java Indonesia.

While Gina, 15 years old said that I want to enjoy art activity like… Continue

What is the purpose of NGO branding in the field?

“The Constellation? I have never heard of that NGO. And your approach is being used in 26 countries in thousands of communities?” I heard this comment dozens of times and I like it. I like this low profile and want to keep it this way. It is not about us as an organization, it’s about the communities and their progress. If there is one thing useful to brand, it’s the approach (SALT/ CLCP) communities use to progress, but it’s certainly not about some Belgian NGO and its branding.… Continue

When cosmetologists were invited to hug each other the response was overwhelming! We know the effect of claps to cheer and show appreciation but what happened here was totally unexpected. Hugs were done not in twos, but threes, four, fives and everyone ensured that each participant enjoyed a hug from her / himself.

In reflection when asked what it meant? The meaning of why we are humans was recited; we love and have emotions; we have compassion; we are caring and have feelings… Continue

I am glad to share an inspiring story learnt during SALT visits facilitated by The Constellation, India Community Life Competence Group and SAMRAKSHA on 24th October 2010 at Koppal in North Karnataka, India.…

Learning CLCP With Our Peer Group!

Learning CLCP With Our Peer Group With nature as backyard, 11 Peer Educators of Peer Ed ME - PAMACQ collectively learned about CLCP in a way that is different and innovative. The traning was not the typical kind. Here's why.....
Home is where the heart is. We spent two days in Ate Yda's place in Cogeo, Antipolo.
Ate Yda de Guia is the current President of Peer Ed ME - PAMACQ and she
offered her home as… Continue

From GIPA to MEPA: Toward a Community -Owned and -Sustained Response

Guyana Competence with lead by three Facilitators will be engaging on behalf of the Guyana Responsible Parenthood Association (GRPA), 40 cosmetologists to begin the process of Community Life Competence. The cosmetologists have, in the past been exposed to issues related to HIV, as well as Sexual and Reproductive Health (SRH). The coordinators, having being exposed to Community Life Competence during a UN Group retreat, recently, strongly feel that this is the logical next step for the… Continue

Do we need to take HIV outside the exclusive public health domain ?

The epidemic of HIV is a genuinely cross-cutting issue knowing no real or notional borders in its progression or the adverse outcome(s).…

THE LIFE OF A TRUCK DRIVER IN KENYA

Though nothing comes on your way without a struggle,Truckers in Kenya gets their meager wages in the hard way.Their employers don't care about their welfare and all they care is their cargo to reach the destination.The driver starts from the port of Mombasa headed for Rwanda ,Burundi,Congo,or Malawi without knowing when he will be back and whatever will happen on the way. He bids farewell to his family and off he hits the road. The obstacles he finds on the journey are nightmares where even the… Continue