Why CLCP is far better than Targeted Interventions (TI)

At the recently concluded CLCP Workshop, for all CARE staff working in EMPHASIS (our project name) held at CARE India office in New Delhi, from 18-21 October 2010, one of the participants asked me an explaination. His dilemma was that if we carried out the Community Life Competence Process there seemed to be an apparent disparity between EMPHASIS (our project) goals and objectives with those of the community. Consequently, I explained that:

In the Targeted Intervention Model only a few members in the Community would be interested in the EMPHASIS goals and probably they could achieve them during the project period, if our team worked in all the communities they identified the impact population. In this scenario the vast majority of the community members and their potential was largely untapped. 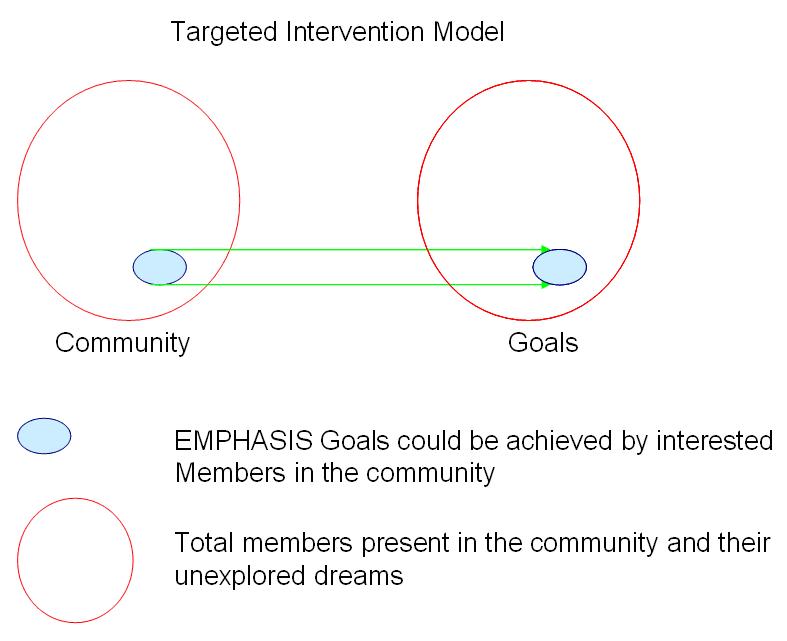 However, in the CLCP model all the members in the community working together achieve the EMPHASIS goals, which were only a small part of the entire Community dreams. Hence, as all members present in the community work to achieve all their dreams, achievement of the EMPHASIS goals was a by-product. In addition, one advantage was that EMPHASIS team members played the role of a facilitator only, so there was less work! 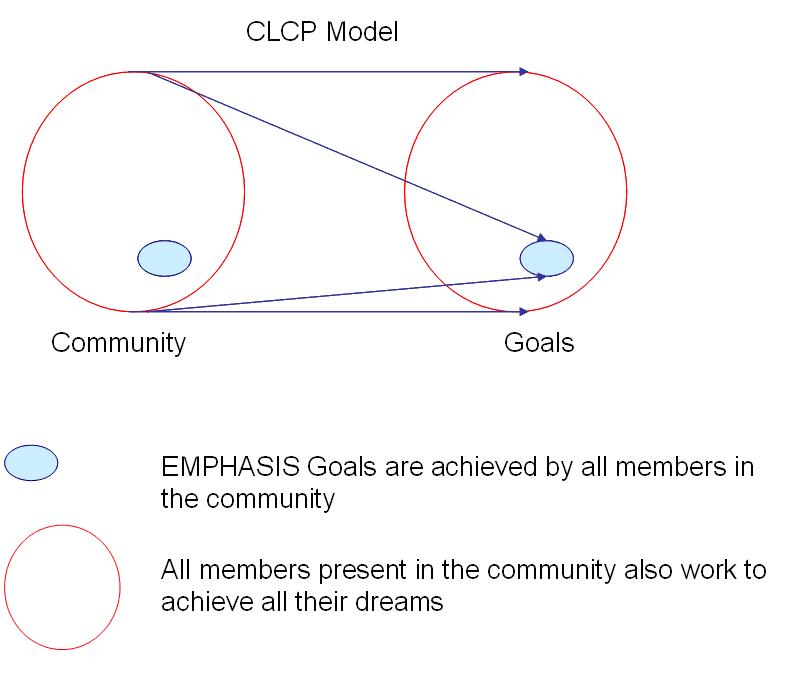 This is only one of the singular and inherent strong point of this strengths-based approach. There are many more, and I hope to list them here, drawing mainly from our documentation of the AIDS Competence process in villages of Northern Karnataka, in India a few years ago.

This is somewhat like a story by O. Henry called, "The gift of the Magi". :-) Imagine me, lecturing Gaston on a story that he came across first! However, on the flip side, shows we always want to share and also remember what interests others have.

Hi Rafique, this link was forwarded to me by Gaston:-)

Rituu has just sent me a link:

where the same story reinvented is told from four communities in Kenya by Denis Whittle. Their Venn diagram is: 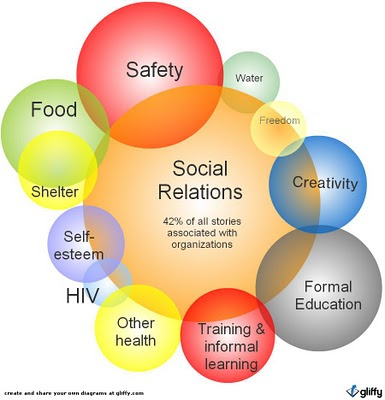 EMPHASIS you will be glad to know works with cross-border mobile population from Bangladesh and Nepal. Morevoer, EMPHASIS has a focus on two of the poorest districts of these two countires, namely Jessore and Satkhira of Bangladesh; as well as Accham and Kanchanpur of Nepal. As for the areas in UP that EMPHASIS works in, they are Noida, and Ghaziabad of NCR-Delhi, as well as Gaurifanta on the Indo-Nepal border, next to Dhangadi on the Nepal side.

Hope this information helps you to plan your tie-ups with EMPHASIS,

Congratulations for the wonderful movement led by you and you team !

We are starting Project Aarambh in Uttar Pradesh . Project 'Aarambh' is dedicated towards building the knowledge and capacity on HIV/AIDS & Reproductive Health of highly marginalized and socially excluded community of bi-cycle rickshaw pullers in India.
As the RPs community comprises mostly of migrant population . The RPs possess some common characteristics like risky sexual behaviour, multiple sex partners, homo sex, substance abuse, lack of family planning etc. A major group of these RPs comprise of young population group between age of 14 – 40 years. The RPs are also acting as a bridging population for HIV.

We are just starting with project in Jan. 2011 and would love if you could share to have your experience and knowledge of Project Emphasis . We would love to be associated with you :-)

Comment by Gaston on November 9, 2010 at 1:52am
Innovative and exciting ideas. Really keep me posted on this as it's a desire for a long time to do something like this.

In terms of the capacity for IT within a community, I have been impressed multiple times by the IT capacities of communities or at least of 1 of their members. And that's all it takes! One member who is willing to share or demonstrate and that is stimulated by the community. It counts for knowledge on HIV, but also for IT.

We see it with our Blended Learning Programme on CD-ROM in Mali for example. One member of a facilitation team is IT competent and it's then up to US to make sure he feels ready and OK with transferring it to others. It's again revealing a capacity to share, not bringing something to them.

Another example during my SALT visit in a prison in Guyana. One guy knew seriously more about HIV than I did. He was following the epidemic it seemed and knew all the details. It's just up to us to make sure the rest is open to learn from him and he wants to share it. So far, I never met a community where every member is completely ignorant about HIV. We just need to reveal the capacity for transfer within the community.

I am off to Nagaland early tomorrow morning for the North-East Knowledge fair and will not be able to access the Internet for a few days. Hence, my quick reply.

I agree that the excel file may be a simple quantitative measurement of the number of times we did SALT visits, AAR, Dreams, AAR, Self Assessment, AAR, and other CLCP tools in the Competence Cycle. However, I agree with Rituu that the excel file or 'chart of hills and dales' do not capture the qualitative data or the story behind the dreams, or self assessment, nor of any of the numerous AAR purpotedly done after each visit to the community. For AAR is where the bread-and-butter learning emerges.

As for your dream of having a world map, I am sure with GIS we can see the name, picture, main strengths, contact details and the Self-Assessment results. Nabesh and me met one of our CARE India state program managers and he demonstrated one that he had got done for the state health program that he was in charge. Nabesh can guide us to him.

As for doing this map in our Google Community Walk Map, if all the commmunities that we want to track the progress are given log-in access to their respective baloon on the Community Walk Map, then the community representative who knows a little bit of IT could then be trained over skype, to upadate this excel chart say once a month and upload 'the hills and dales chart' as a thumbnail picture on the baloon which represents their community on the Google Community Walk Map. Accordingly, if someone clicks on the thumbnail, then they can view the whole chart picture in full scale, in a pop-up window.

This way every community would be updating in real time, periodically, on-line, in a single world map, their progress in CLCP.

Hope I am comprehensible. Also, looking forward to Nabesh providing details or roping our CARE friend in.

Comment by Gaston on November 8, 2010 at 4:23pm
Wow, I am impressed Rafique. I think the excel is fine as long as it serves the purpose you have in mind. Why do we measure certain things, for whom and what is the simplest, yet effective way to do this? A challenge we face in various countries. Eventually, we dream of a world map where you can click on a country, then a region and see hundreds of dots representing communities. For each dot, you'll see the name, picture, main strengths , contact details and perhaps the Self-Assessment results. Your efforts are a first step to that in India. Mali and DRC are doing the same....we're getting there :)

Secondly, if you are not doing this already, I would recommend to also involve communities in this. It will help them to measure their own change, get insights into other communities and stimulate them in their response. That community that is the hill would love to see this picture. The 'dale' community will get encouraged to become a hill. How can we best support them to measure their change, given restrictions that might be there.

This is super cool- hills and dales and all.

In After Action Review (AAR) , we often discuss lessons learned but do not document. Therefore, in the excel sheet we could add two columns for AAR instead of one. First column can have the number of AARs held and the other key lessons learned. What do you think?

Comment by Dr. E. Mohamed Rafique on November 7, 2010 at 2:08pm
Dear Gaston,
In continuation of my comment on tracking our CLCP work among the mobile populations we work with in Delhi, Mumbai, Kolkata, Uttar Pradesh, and Uttarkhand states, I would like to state that once we have the data on the number of CLCP tools used in each of the communities in these various locations and sublocations, then it will be easy to make a chart from the excel data. This chart for a small sample of locations where we have done less AAR than visits, would look like: I call this chart, "the hills and dales of CLCP"!

Ideally if we had completed all CLCP tools and work in all our communities than we would have a table mount like graph with no vales. However, we know, we almost always fall behind in our AAR, and also CLCP work in all the communities are never at the same level of progress. So, we always have "the hills and dales of CLCP"!