The Marginalization of CBOs by Development Actors: A Perspective from Zimbabwe

Samuel Maruta of the Southern Institute of Peace-building and Development (SIPD) from Ruwa, Zimbabwe has conducted research about the role of community-based organizations (CBOs) in community development and the nature of their operating environment. He points to the need for a paradigm shift among development actors in favor of CBOs, and for CBOs to build their capacities in critical areas of leadership and management.

For the purposes of his study, Maruta describes CBOs as such,


“At their point of formation, CBOs are usually a spontaneous reaction by a group of residents to a particular adverse situation or opportunity in the community and its environment. The core group of its founders are usually an affinity group of relatively long association. As such, it is largely informal, with decisions made on the go. Responsibilities are shared on an ad hoc basis without any formal system of appointment to positions. What binds the group is the spirit of togetherness and what drives its work is the shared interest in its success. As a result [most of] the work is carried out on a voluntary basis.”

The selection below is taken from the SIPD’s occasional paper, which was published last year. To receive a full copy of the paper, please contact SIPD at: sipd@mweb.co.zw.

Within the last twelve months to two years, talk about the importance of community-based organisations (CBOs) has assumed some currency in development circles in Zimbabwe. In the last ten years, partly due to the prevailing socio-economic challenges and increasing donor fatigue, some donor organisations began experimenting working with CBOs. This was due to the perception that they provide a more direct route to their target beneficiaries at the grassroots. At the same time local NGOs began emphasising working with and through CBOs as part of their core strategy. These developments seemed to indicate an enhanced place for CBOs in development in general, but especially in community development.

Central and local government, private sector companies, and civil society formations each play a necessary and very important role in community development, both in its own right but also in association with the others. And that in this interaction, CBOs feature prominently. They are the foot soldiers, the wheels on which all community development work rolls. This is perhaps why Ninnette Eliasov (in Magadla 2008), speaking of South Africa, said that they are “the core of community development.” Unfortunately, they are to community development what fresh air is to life – taken for granted under normal circumstances, only to be noticed when they are not there. 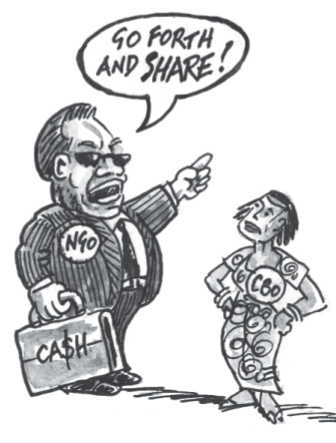 Illustration from “The Barefoot Guide to Working with Organizations and Social Change.” See: www.barefootguide.org.

Statements from the field research underscore the centrality of CBOs in community development in Zimbabwe. One of the respondents to this research who works for a large regional development organisation with extensive operations in Zimbabwe said: “CBOs are critical for grassroots mobilisation and coordination of beneficiaries…They save you time when you are on the ground.” Another said: “They are the interface of the network, its membership and the general public and communities they operate in.” And yet another said CBOs “undertake relevant research and utilize research findings to improve the quality of services; they are the backbone of the organisation’s strategic plan.”

Magadla (2008) laments that “in some instances it’s the CBOs that do the work [that] the NGOs receive funding for, yet are generally undervalued and unrecognised for their contribution to development by other role-players.” There is a possibility of some sub-conscious collusion to this effect between the CBOs and these other players. On one hand, the NGO might overlook the need to treat the CBO separate from the rest of the community and therefore fail to compensate it for its services. On the other hand the CBO, being only vaguely aware of its rights in this relationship, does nothing about it. In some instances, however, one would be hard pressed to rule out the possibility of deliberate exploitation of the one by the other. The net effect therefore is that the CBO does not take ownership of the project, regarding it as the work of the NGO. The NGO in turn assumes that the CBO owns the project and is therefore expected to ensure its sustainability.

NGOs are sometimes not very comfortable with how CBOs relate to them. For many people in the communities, NGOs are organisations with a lot of money to spend on whoever lays the best claim to it. For them the NGO is not the legal entity that the organisation is, but the people they see criss-crossing their communities and villages in their immaculate high rider vehicles. This picture explains, at least to some extent, how some members of the communities respond to NGOs—they want to take advantage of their position in the community to claim their share of the money. In relation to this scenario, one of the respondents said:

“…CBOs are prone to domination by a few individuals who remain beneficiaries on all programmes that come to the community; even on exposure visits you find the same individual attending all trips. CBOs usually want to attend each and every training that comes to the community.”

Perhaps it is because of the image that the NGOs portray to the communities [a deficit model in which a community is a collection of people with endless problems whose solution depends only on intervention by outsiders] that members of CBOs exhibit these tendencies. Or perhaps it is because the ownership of the project belongs to the NGO, while the CBO’s role in it is instrumental, yet “unrecognised and unrespected.” In the latter case, the leaders of the CBOs see direct participation in all activities as the only form of return for the time and effort they invest in the project.

While the mainstay of CBO funding is the volunteerism of its members, membership fees and occasional ad hoc levies, many of them have in recent years taken to looking for external funding for some of their projects. Among their potential sources of funding are local private sector companies, local authorities, central government departments, parent NGOs and donor organisations. However the chances of success with local authorities, central government, and private sector companies are next to nothing in Zimbabwe today, not least because of the general economic challenges currently facing the country. Giving to charity is not yet part of the culture in Zimbabwe. And parent NGOs are not a good bet either.

For their part, donor organisations are generally unwilling to give money directly to CBOs. One of the reasons often cited is the institutional incapacity of the CBOs to handle the money and the complex transactions that go with the funding requirements of the donors. As Magadla (2008) says, donor “funding [is] usually accessible only to organisations able to produce fancy proposals, that [are] registered, long-established, and experienced in dealing with large sums of money.” While these requirements are relative and should not be barriers per se, in practice they automatically exclude most CBOs. Magadla (2008) goes on to say, “It is harder for donors to fund a large number of small organisations than a small number of large organisations. So, to reduce their own workload, they tend to fund larger organizations, which sometimes then pass on funding to smaller organisations.” Thus not having enough capacity to handle CBOs, donor organisations “wholesale” their funding to NGOs hoping that they in turn would “retail” it to the communities and CBOs.

Going directly to communities: we need to know more

Some donor organisations have now realised the ineffectiveness of this wholesaling approach. That while they fund NGOs on the basis of proposals professing intentions to carry out interventions at the community level, the amount of trickle down is usually far smaller than they had hoped for. As a result they have begun to explore the possibility of by-passing the intermediary NGOs and going directly to the communities themselves. How widespread this practice is and what difference it is making in terms of project implementation and impact would make an important subject of further research.

It is important, if not imperative, for the equitable and sustainable development of Zimbabwe that CBOs be given the space and be strengthened to play a central role in community development.  For only strong CBOs make for strong communities, which are the building blocks for a strong Zimbabwe.

Sorry but it’s not YOUR project

Did I fund Organization X?

Overlooking the Capacity of Local Organizations

How to build strong relationships with grassroots organizations – P...

Please see this blog from India, reflecting similar situation. I have put the English translation as a response to the blog

Comment by Jennifer Lentfer on June 9, 2011 at 9:32pm
Thanks for your comment Joao and good luck in your important work. You might also want to read: http://www.how-matters.org/2010/11/08/missing-from-diy-aid-debate/, which discusses the strengths, capacities, and assets of CBOs that are often overlooked.

Thank you very much Jennifer for sharing this interesting study and (on the other hand) debate. I got interested on the full report of the study and already sent an email to SIPD (as you provided). I'm chairing the Network of International NGOs on Health and HIV in Mozambique and most of our members are working with CBOs (probably dealing with some concerns related). It is definitely an important point to raising among workmates.

Thanks for raising a very critical issue, a challenge here in India as well. I am looking for examples where transition from NGO to CBOs has been successful.