It’s going to be a surreal moment.

From what I understand, there’s a composer, a bridge, 600 singing schoolchildren, a Nobel Laureate, and one righteous celebration. The new Peace Bridge in Derry~Londonderry, Northern Ireland will be dedicated on June 25th.

And amazing to me still, I will be there. 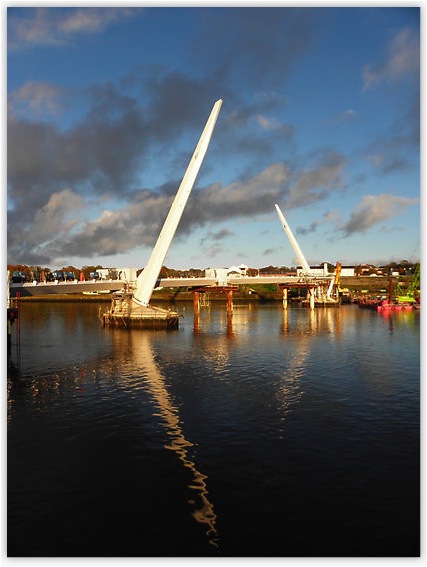 © Mike Quigley. You can order his cards and prints at: http://bit.ly/meEc3x

Irish composer Ian Wilson contacted me via email in April. Could he use one of my poems in a new work he had been commissioned to compose for the bridge's opening ceremony?

I was shocked and flattered. Sharing a few of my poems related to aid work in January had suddenly became all of the sudden, kind of a big deal. What’s more, this meant that I actually was a poet. Thus hopefully my readers will grant me a bit of self-indulgence to follow.

My first question to Ian was how he had even found my poem, the first I had ever actually published or even shared publicly, aside from the occasional readings to friends and fairly-empty coffee houses.

He replied, “I must have read literally hundreds of poems, poems about bridges, poems about optimism, poems about hope and reconciliation, and I eventually ended up with 6 or 7 I felt would work well together in a work of music.”

The bridge is part of a wider EU-backed peace and reconciliation program. Derry~Londonderry, the location of 1972’s Bloody Sunday, or Bogside Massacre, is a city built on either side of the river Foyle. As Ian describes, “One side is mainly Catholic/Nationalist and the other has a slightly larger Protestant/Unionist population. A plan was realised to build a pedestrian bridge spanning the Foyle (it already has two motor bridges), which would practically and symbolically unite the city.”

According to the EU, the key to the Peace Program’s success has been grassroots engagement and the consistent pursuit of local level partnerships to give a voice to those communities most affected by the conflict, which is more than a little how-matters.org related. Though the £13m bridge is not without its controversies, this beautiful structure is meant to contribute to lasting relationships between the two main communities, demonstrating peace and stability for the region.

My little poem will be alongside those of other poetic heavyweights such as Seamus Heaney and Phillip Larkin, demonstrating the power and connectivity of the internet in our globalized world. Ian tells me my poem is contained in the liveliest piece of the 25-minute work and that I will be welcomed as part of the ceremony, marching across the bridge with the assembly of community members and dignitaries.

I wrote Shift I at a moment of my life when I had been pouring tons of energy into changing a part of myself, only to discover that despite the force behind my effort, the change would occur naturally and unexpectedly, just as the power of the water constantly changes the banks and sandbars of a river. As a development practitioner whose work has been focused in southern Africa, I can't begin to know the implications of this for peacebuilding in Northern Ireland. Nevertheless, here is the poem:

pushes against the shore

now has a new flow.

On June 25th, as I, the poet, walk across the river Foyle, hopefully time will slow down so I can again feel the shift.

Trocaire: 10 things INGOs need to do

Beyond the Ribbon Cutting

How to build strong relationships with grassroots organizations - P...

Comment by Gaston on June 9, 2011 at 7:55am
I really like the poem Jennifer. Your story behind the poem deserves to be on the bridge as well. I experience that my personal journeys/ personal growth can often be compared with something in nature. That's why the journey eventually feels so natural probably!