Women Café in Amsterdam, The Netherlands, is using SALT-CLCP in their activities. Their dream is to "contribute to a beautiful and healthy world". One of the current actions is developing an international Women Choir. In an effort to learn from others, Ghalia and Zohra, recently brought a SALT visit to a Syrian musician.
Read the report (in Dutch)  by Ghalia Jando.
Translation in english in the comment.
***** 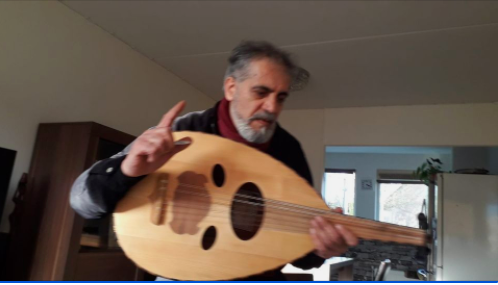 On Saturday 20 February 2021, Zohra and I (Ghalia) visited a Syrian artist and Oed player in Hoofddorp. By doing a SALT learning visit (SALT: Stimulate, Appreciate, Listen & Transfer), we learn how others face certain challenges. We wanted to learn from Mr. Alsharaa about how he discovered his talents and if he has any tips for the activities we organise on IJburg and Zeeburgereiland.

First a short introduction: Mr. Alsharaa has been living in the Netherlands for six years with his wife and five children. In Syria he has completed two studies; Philosophy and Art. He plays the Oed, which is a well-known musical instrument from the Middle East. He also organised festivals and activities in Syria.
Our conversation topics were about his activities in Syria in the past, but also about his experiences in the Netherlands. Mr. thinks it is a pity that he cannot prove himself in the Netherlands and feels undervalued. This is probably partly because he has not yet mastered the Dutch language. He occasionally receives invitations to take part in activities to play Oed, sometimes alone or together with a group of musicians. He receives small allowances for this. He regrets that he did not succeed in finding a studio location to practice his professions, because of Corona measures this has come to a standstill.

Mr. Alsharaa gave some valuable tips that we can use in talent development activities. His advice is: `Just do it! By doing you will discover if you are talented and then you can work on it.

He had three tips for the International Women's Choir of IJburg and Zeeburgereiland:
1- He explained to us clearly what a scale is. A scale forms the basis of a piece of music. He gave us tips about certain pieces of music that we can use for the choir. He gave tips on choosing songs that sound both Western and Eastern. For example, scale Nahawand, this scale is used by both Western and Eastern composers.
2- He gave the tip to listen to pieces of music by Egyptian composer Mohammed Ab del Wahhab. Ab del Wahhab introduced Western rhythms into Egyptian classical songs.
3- Sir emphasised that the most important thing is to keep working on your talents and to strengthen them by continuing to learn.
Our learning points for a next SALT visit:
1- On arrival, clearly explain what exactly the purpose of our visit is, by doing so we hope to stray less to other topics of conversation. This time we talked a lot about his old life in Syria.
2- We also want to meet in a neutral place instead of in someone's home. If you feel less the 'guest', then this gives the opportunity to change the topic of conversation more quickly.