On one of my last evenings in Barcelona a few of us gathered at a cozy shop in an old part of the city called La Villa de Gracias (the Village of Gratitude) to talk over mango milkshakes and crepes.

After three days of working together, we had reached a place of being willing to share quite openly of struggles in our lives.

I found myself drawing strength and hope from MariJo Vasquez in particular, a native of Barcelonia. MariJo has faced struggles yet has clearly come through them strengthened, though not in a heavy way. There was a sparkling warmth in her eyes and smile on her face as she talked of how she has chosen to embrace the gifts she can offer in times of challenge, though it is not always easy to do so.

I could relate. There are gifts I love to share and gifts I am still learning to embrace. 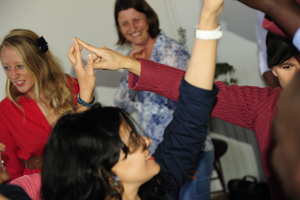 “A little struggle is good,” said MariJo as we wandered the narrow Barcelona streets afterwards, the moon a slice of brightness above us. “It keeps me mindful.”

That also resonated deep for me — a gift of life is struggle, I try to remind myself.

It was the moments like these — and there were a number of them — in which I knew I was meeting kindred spirits as I gathered with about a dozen people in Barcelona this past week.

We had come from Senegal, Capetown, Belgium, Canada, the Netherlands and India. Our intent was to strengthen the story-sharing capacity of a growing group of people around the world who have dedicated themselves to supporting communities to create their own solutions to their issues, rather than waiting for “the expert” to come in and fix them.

But what I found most meaningful about those days was the chance to taste  a little more of the world’s humanity in the form of these people as we took a few days to share food — mmm, paellas — stomach-clutching laughter, struggle, walks and dreams of creating a brighter future.

I really believe we were able to bond as we much as we did first and foremost because all of us clearly choose to be open to dreaming of an alternative future, to sharing our gifts and to taking ownership for bringing that alternative future into being.

That’s literally what we were doing through the course of our time together. Sitting in a circle on the sun-warmed, beautifully tiled floor of an historic Catalan building, we built a collective dream for this story-sharing in 2050. In small groups we then identified the practices and actions required to actualize this dream. We finished with each of us penning our names by the specific actions we were committed to take. The intent is to reconnect later this year to check in on those commitments.

But I am convinced that it is not so much the “checking off” of those tasks that will reveal the power of this gathering as what already started occurring in my conversations with MariJo and others — the willingness, even urge to be more vulnerable with each other.

As each of us heads back into our various communities I can imagine there will be a spillover effect from this gathering there too. I for one am returning freshly inspired to embrace this possibility-oriented, gifts-based, “I-can-create-the-future" mindedness even more strongly in my own neighbourhood. I envision the same kind of openness that came to life in Barcelona between people from seven different parts of the world now happening more between me and my neighbours and between my neighbours and each other. And then, as that happens, imagine the possibilities for us as a neighbourhood.

No, we don’t have a major problem to solve at the moment, but talk about the opportunity to flourish collectively, to do more than survive as a neighbourhood, to grow into our “full self” as a living entity.

I went to Barcelona to help change the world. I came home seeing more clearly than ever that one powerful way to do that is through not changing but connecting the people in my own “back yard.”

Photo Caption: Celicia Theys, (far left), inspired everyone to join in a spontaneous "live sculpture" experience which helped build understanding of the Constellation network — and also built bonds between those gathered.

This blog was originally posted to www.axiomnews.ca.

To read a blog by Cecelia on the gathering, click here.

Thanks both Celicia and Jan for taking the time to share your appreciation. Celicia, my apologies for misspelling your name! I was so sure I had it correct. We will make that change immediately.

I also want to mention how much I appreciated the presence and gifts both of you brought to this gathering. Celicia, your incredible passion and openness and fresh thinking was so rejuvenating and I'm really excited to see where you take your theatre work. I think it has huge potential for enlivening communities. Jan, as I also mention on the Axiom site in response to your comment, I see huge possibility in your presence and work also helping us create a brighter future. I'm just so excited about strengthening the presence of things like art and photography and drama into these larger discussions around enabling communities to solve their own issues and realize their full potential!

Thanks a lot for this very human account of our time together in Barcelona! Thank you for pointing out this idea that MariJo had also shared that letting down the mask and accepting to expose our own vulnerabilities is an essential part of meeting and exchanging as humans to dream of a brighter tomorrow. Your presence was insightful and your energy somehow soothing... I agree with Jan that generative journalism like the one AxiomNews practices is an important part of creating and spreading stories of active social change, and we're so happy to see you alongside the Constellation on this journey :) !

Thank you for these reflections from the heart. Your presence in Barcelona was highly appreciated. Media can indeed play a vital generative positive role towards a better world. Axiomnews is all about that which I find very encouraging for our and future generations.