Botswana encourages communities to take the lead in HIV response

(I had the privilege to talk to Gloria, Acting chief information, Education and Communication and Chanana, information, Education and Communication both from National AIDS Coordinating Agency (NACA), Botswana Government. Here is a note from our conversation. It was held in Entebbe October 2017. Kudos to NACA and Botswana Government have recognised the critical role of communities for an effective response to HIV and have taken a bottoms up, strength-based approach.)

In a stakeholder meeting at Francistown in 2012, it was decided to introduce bottom-up approach to HIV response in Botswana. National AIDS coordinating Agency (NACA) engaged a consultant to develop a model, which was later called Communities Acting Together to Control HIV (CATCH). NACA and UNAIDS in partnership with the Constellation organised Community life competence (CLCP) training in 2015 but later NACA took on its management. We decided to do a pilot in South East district through community and traditional leaders. NGO called Humana People to People was engaged to operationalize the approach on behalf of the government.

We have faced challenges in executing of the approach but we have learned from our experience and made changes accordingly. After the first training we realized that our selection of people to be trained was not comprehensive enough, it did not include district extension teams ( district service providers), and village structures after the first training. The second training was now inclusive of all the above. Most of the community facilitators were selected with help of chiefs. After the second training the challenge we faced was retention of facilitators. The work was 8 hours but their payment was low as volunteers. As soon as they got better paying jobs the facilitators left. Therefore, we came to the conclusion that we should not focus on getting just youth as facilitators but also consider retired, older people. 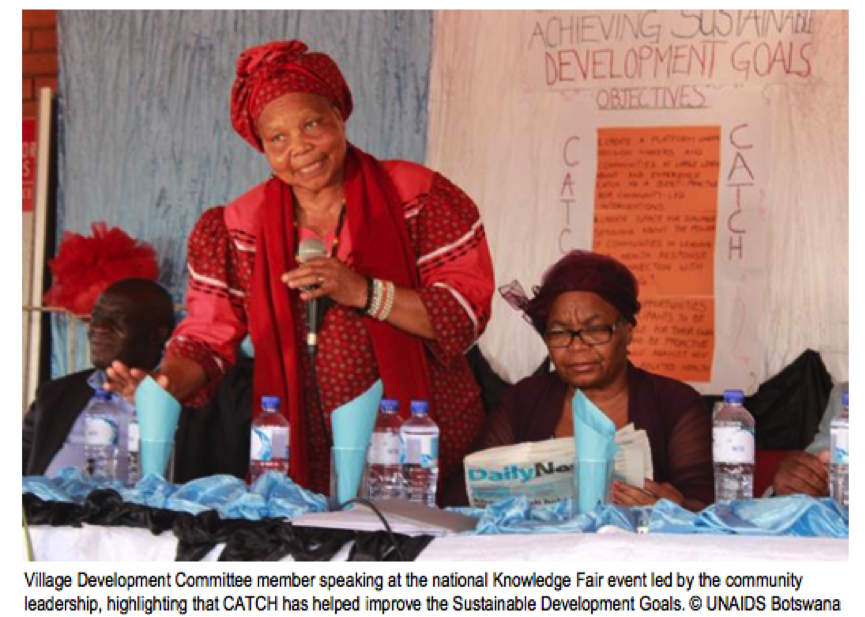 How can CLCP help a country?What can we learn from you?

It does the reverse from the traditional approach. Usually we are quick to identify community problems and solutions rather than identifying strengths that will be ultimately be solutions to their problems. CLCP focuses on identifying and enriching community strengths to enable communities to be agents of their own change. Then change becomes a constant behavior which they adopt which leads to sustainability.

We tend to concentrate on numbers and often overlook qualitative and behavioural indicators. We believe change only happens when there is a biomedical aspect to it, which can be measured. More fundamental aspect is the behavior change for example how many people thought of taking alcohol. We must not forget that if we influence behavior then we will get lower rate of new infections. With HIV the first decision you make every day is very important. The key is if we can influence the decisions of people.

In Botswana, while our intention was HIV, the communities’ priority in most cases was not HIV- they wanted community garden, litter picking etc. Indirectly it ends being linked to HIV like talk about drug abuse and alcohol, unemployment. Referring to the fishbone model, Chanana says that unless we address the underlying issues nothing will change. Inspite of free ARVs, the rate of HIV is going up. There is something which needs to be fixed we need to go down to root cause of issues.

We have begun to observe small changes since the inception of SALT. ARV dropouts are saying that we realize that we should back to medication. Recognizing the strength of the approach we now have CATCH Malaria. We are training traditional leaders who can train facilitators and from South East we have moved to three other districts. But we do not want to hurry up.

To conclude, its not about money or time frame but how we want to upscale. Upscaling can go too quickly and hamper the spirit of what we are doing. If we are to change lives we have to go at the pace of the communities.

We are rooting for SALT at international levesl. 5 SDGs were fixed for CATCH – how we contributed to execution of SDGS. Botswana_AIDS.pdf is the document on how we are reporting about CATCH and its contribution to SDG