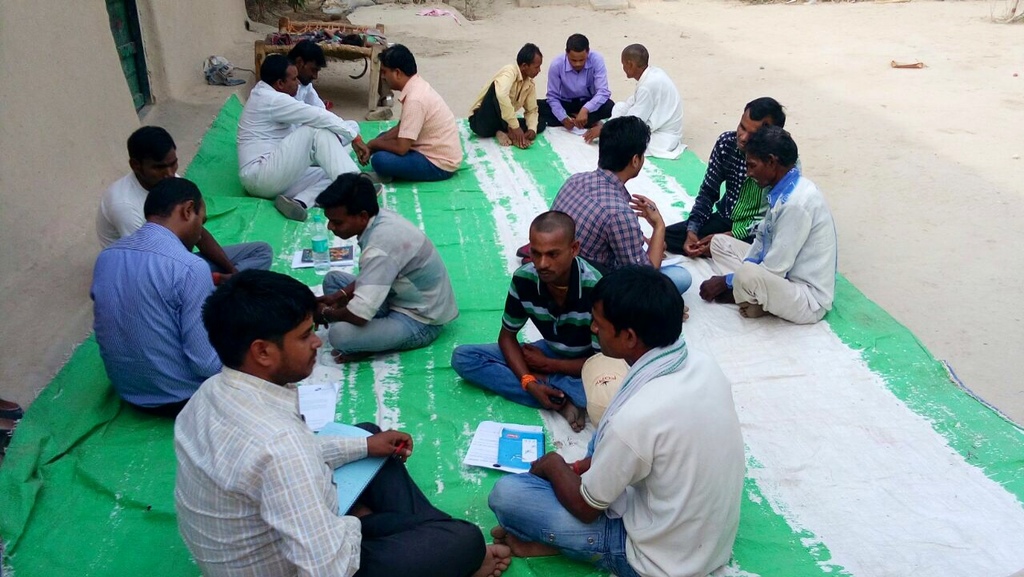 Photo courtesy: Sanjay Jaiswal
SALT is beyond PRA tools
In PRA we make the community do activities, in SALT community comes forward to take action on its issues- Santosh, PGS
SALT is not time taking, it is easy to involve the communities because the SALT process is very positive. I have done action research before where we used PRA tools. It was very lengthy process and community took a lot of time to start responding. But yesterday on a SALT visit with Kaundi community we met a group of men some of them very survivors of trafficking. Initially they were hesitant to talk to us, they sat far from us. After 10-15 minutes of discussion they opened up. Usually they don't open up even after many visits.
The trust  build very soon amongst us because we wanted to learn from best experience of their life. Already community action was begin to emerge- Sushil Kumar, TIP
Builds community ownership in research
We need to adopt new ways in research. I think SALT can be very effective in action research. At our institute we can consider using it in other action research projects
- Dr Sunit, PGS
I was worried when we found it hard to engage the community in conversation and facilitate our last action group on illness and debt. Now  with SALT, we can easily engage the communities and stakeholders in action research. SALT has made my work easier- Shaizad, PGS
Builds energy and connections
For me SALT is about linking different people in the community on common issues. During the SALT visit we met a man, Santosh,  who could have easily got his piece of land released  but he realised that others have the same issue and he got them together and thus eight men got their land.  Thus it has potential to transform individual action to collective action. Through SALT people open up and share openly and when common interests come up we can connect them.-Sanjay Jaiswal, PGS
It is a very good tool for interaction between communities and NGO staff because we focus on positive things. SALT releases positive energy especially in their lives they have had more hard moments than good times- Ashish,  TIP
SALT talks about sharing, appreciation, listen, learn and transfer which appealed to me. I think this will appeal to anyone. Saurabh Sharma, TIP
Stimulates community actions and reduces dependency on external help
In SALT visit community strengths are revealed which encourage the community to take action , they develop self confidence and they do not feel that outsider needs to come from outside - Subedar, PGS
It is an effective tool to ensure participation. In SALT visit community strengths are revealed which encourage the community to take action , they develop self confidence and they do not feel that someone needs to come from outside to resolve their issue - Subedar
SALT changes from individual quality to group quality- as community members realised own and each others strengths. Thus it transforms from individual effort to cumulative effort. The concept of confession in Christianity or Freud says that listening can give relief to a person... kind of reminds of psycho-analysis to me - Peeyush, PGS

When we listen and appreciate, we create a space for  open sharing

Usually outsiders come to teach and tell the community members what is good for them. Through SALT, the facilitator in meeting with the community creates a family like  environment because first time someone has come to learn from and listen to the community.  Community members start thinking they have something valuable to contribute if someone wants to listen to them! Its been years since they have experienced that moment when they did something meaningful.  SALT reminds them of those moments and fills them with joy and new energy to take action- Santosh, TIP

SALT is a way that person who has never seen seen his or her own strength can realize ; We learned during SALT visit that Asha Devi had helped to take a pregnant woman walking with her 5 kms to the hospital whereas no one in the village came to help. She had not realized that she had done something important. But when we listened and appreciated this has encouraged her to take more action. This also inspired other women around her- Poonam, PGS

Comment by ABEDNEGO KITHEKA MUTUNGWA on August 24, 2016 at 6:00am
Powerful testimony ,SALT brings the best out of communities/families /individuals ,they are able to see their strengths and how valuable they are towards their dreams

Thanks Rituu for sharing and your wonderful determined work behind this. Also love the picture: triads!