The circle at the service of human connection

The circle is inspired by the Dialogues of the quantum physicist David Bohm, a contemporary and friend of Einstein. It is a process of introspection and exchange with others. There is no search for convergence with the visions of the other members of the circle, but simply the expression of resonances. By searching in our own depths for what is alive (which we may never have seen or touched before), we inspire each other. The more multiple and diverse the visions are, the more contradictions and paradoxes we touch, the closer we get to reality...

Dialogue becomes a place of collective learning from which a greater sense of harmony, camaraderie and creativity can emerge.

The first time I heard about circles it was through Nathalie Legros. She proposed it in our workplace at the European Commission, and it was a challenge as it was not really a quiet place and it had never been done before. I remember saying to myself: “I hope that there will be nobody working directly with me.” It was great. We learned a lot about each other and, with time it became something that we needed. Two-three years after, we used it in our everyday work, in unit meetings…it became a common tool.

We were to have a meeting on AIDS in Indonesia, and the AIDS programme director was to be there, the wife of a governor, the director of UNFPA… My proposition to do a circle was declined at first: “In our culture, this is impossible.” It does take some guts to persevere and say: “No, they are humans too, they will enjoy it.” I remember how relieved the high ranked officials were to act as humans in a circle, and others to see that they enjoyed it.

Last September, between two lockdowns, I opened my Emagine Centre for maybe two weeks. We asked people: “Aren’t you afraid to sit all together inside?” And we had this circle about the quality of life: “Add life to our days instead of adding days to our life.” A participant was a lady who works with the dying. Everyone in the circle was talking to her. There was this wonderful quality of circle and knowledge because we shared stories. So, even though we had a theme, we were sharing this magical moment. Even with a theme you can have a lot of co-creation of wisdom.

BelCompetence (The Constellation Belgium) and circles:

In BelCompetence, we practiced something that we called the cercle de vie where we shared and talked about individual dreams and practices. It was based on Sandrine Ruppol’s wish of supporting each other in our individual journey with the approach. For instance, I remember we talked about the practice: “I use happiness as a compass.”

It was an inspiring and relieving moment. We started it as an open discussion then it concentrated on practices then it went open again.

There has been an evolution towards something different. Nathalie was always drawing as we talked. That day Nathalie was drawing a spiral getting stronger and longer as people were sharing. We felt that, even though it was never the intent, there was resonance—the field, as we call it—that made a collective narrative happen through individual narratives.

We feel it is an important space to offer today to reauthor our story in these momentous times and to listen to the interconnections between us.

We are convinced at BelCompetence that a circle can provide the environment for change.

In our discordant pandemic climate, the place of a circle is all the more important and the need to maintain it is even more imperative.

We need more circles. We cannot have enough circles.

It is about building a container—bringing in safety, inclusion, equality, a leader in each chair, welcoming what wants to emerge—and holding that space where people can go deeper in whatever is on their minds.

I do think that there is a strong muscle building practice. I sense the difference between someone who is doing his or her first circle or did some circles. I often see that people in a first circle just listen. They are new to the space. It can be overwhelming at the beginning to get used to that field.

We put our analytical brain to rest, we mute it, and we share solely in the present moment with no judgement and preconceived ideas.

Some authors working on Bohm’s work say that this kind of dialogue involves humility and patience.

In our ancient poetry, there is a lot of talk about listening to your heart. As one of them said: the head is like a donkey walking on ice so discover the heart that connects to people.

There is a circle as a container then there are processes within that cercle. For example, the Samoan circle, the fishbowl technique which we use in the Agora of Grez-Doiceau. A big circle of people who are silent. If you want to talk, you go in the middle where there are five or six chairs; one must always stay free. We have done quite a few of them. It always had a topic: car circulation in the centre of the village, dealing with agriculture’s toxic product…

Then there is the circle as a practice in itself. It is not just the form that the discussion takes, or its intention or purpose, but a practice itself leads to different kinds of sharing not just through the shape of the circle but very much through the embodiment or the way the facilitator holds the space.

The pillars of this kind of circle [Bohm circle] are: sharing without any agenda; in other words, no decision to be made, no problem to be solved or result to be achieved, no intention. We simply invite everybody into the circle to express their feelings in the moment. Everyone is listening. We may stay silent and offer to the circle a moment of quiet.

The purpose of the circle

You only have to create the circumstances and then, like popcorn, ideas pop up and influence each other because it is a system. A circle is at the service of human connection.

I think that there are circles with themes and circles to just co-create meaning together.

The circle made a collective narrative happen through individual narratives.

The circle creates an energy field. It is an inspiring and relieving moment.

The process then allows us to discover new skills and new ideas can emerge. Everything becomes clearer. It allows us to identify better what action should be taken and overcome uncertainty.

“Adding life to our days instead of adding days to our life.”

I feel that the SALT session I facilitate are two circles. We are trying to swim together with a sense of equality that prevails in the learning process. Paul Sartre says: “Both are learners, the educator and the educatee,” which I find resonates with what SALT says: “Both sides learn, the facilitator and the group.”

“A safe space for unsafe dialogue.”

The role of the facilitator

My experience is that if you sit in a circle of like-minded people it never goes deep. It is the diversity you need in a circle.

The problem is that you need to hold the space for it so that means the facilitation skills to allow the diversity to meet.

About the role of the facilitator, I can say that when I am tired and tense it influences the field. If I ground myself and open up, magic happens.

The facilitator must block any interference [hierarchy, preconceived ideas, positive or negative judgement, fear of going beyond, analytical brain…].

Positive or negative judgement acts as a filter distancing us from the present. While we suspend it, it allows us to remain as close as possible to the experience lived in the moment.

How do you put the analytical mind to rest? I think you don’t and that is where the practice of the facilitator is so important. It is a mindfulness practice; by doing that for yourself as a facilitator, you are allowing it to exist in the circle as well.

How do you open the space?

The circle starts and stops.

A good thing is just to ask explicitly people who check in to drop their functions. It is like a magic trick and it just helps people to get in the space of sharing.

It reminds me of what I did in Vilvoorde: That magic moment of having people telling a story to each other is already setting the container, opening it up.

It reminds me of an exercise I did with Marlou in Amsterdam where we were asked to write down on a piece of paper either our highest diploma, certificate, or title that we had received and then we were asked to rip it apart and throw it in the middle: “We are all humans!”

When I start a circle, the first thing I do is help people to be in their body, especially for people who are new to the circle. Put their minds into rest and be in their body, to touch their chair for example. Ask people what they feel—most people will talk about what they think.

An all times way to relate to each other

The circle is not an invention of our time. At some point, we developed something to get together to share and learn from each other and it went well in a circle. Nowadays when we talk about this container, we say the facilitator has to do this and that. I am not sure that in those circles in the native societies they even had a facilitator. Somehow, they related to each other and it went well when they were in a circle and they felt it was a sacred place. The practice was part of them. They did not need anybody to remind them about how to feel safe. I think that there were circles with themes and circles to just co-create meaning together.

Religious groups from early ages to date get together in circles. It is a safe space, and everybody can come in and out. People were not talking about circles; they were simply doing it. What we are doing now is taking a step back and looking at that. 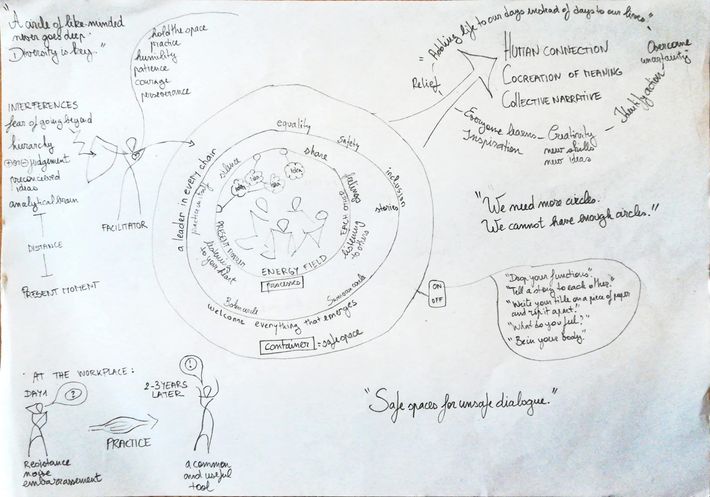