In September 2016, following the mediation of our friend Ian Campbell, the Constellation was approached by the German Institute for Medical Mission, DIFÄM, for community support in a project of cross-border reconciliation of communities with their health system. Indeed, the Ebola epidemics in north-western Liberia and in the Guinea Forest Region led to mistrust between communities and the health personnel. Lack of trust also appeared between the medical staff and the health authorities in these areas. The aim of the project is therefore to restore dialogue and trust between these actors and the communities they serve through the development and implementation of Health Charters.

The Constellation supports 8 communities in Guinea and 8 in Liberia through a SALT / CLCP process, and one output of this project will be these Health Charters. Our facilitators in Guinea (Pastor Edmond Noramou and Joseph Koïvogui) and Liberia (Ibrahim Kamara) began to work on 17 October 2016, less than a month after the first contact with DIFÄM; probably one of the most rapidly set up partnerships...

The activities will continue in December 2016 with the first training of facilitators facilitated by the person of reference, Luc, and local facilitators. SALT visits and training will continue in 2017. The end of the partnership is planned in July 2017 with a Knowledge Fair bringing together communities and health actors from both sides of the Liberia-Guinea border. 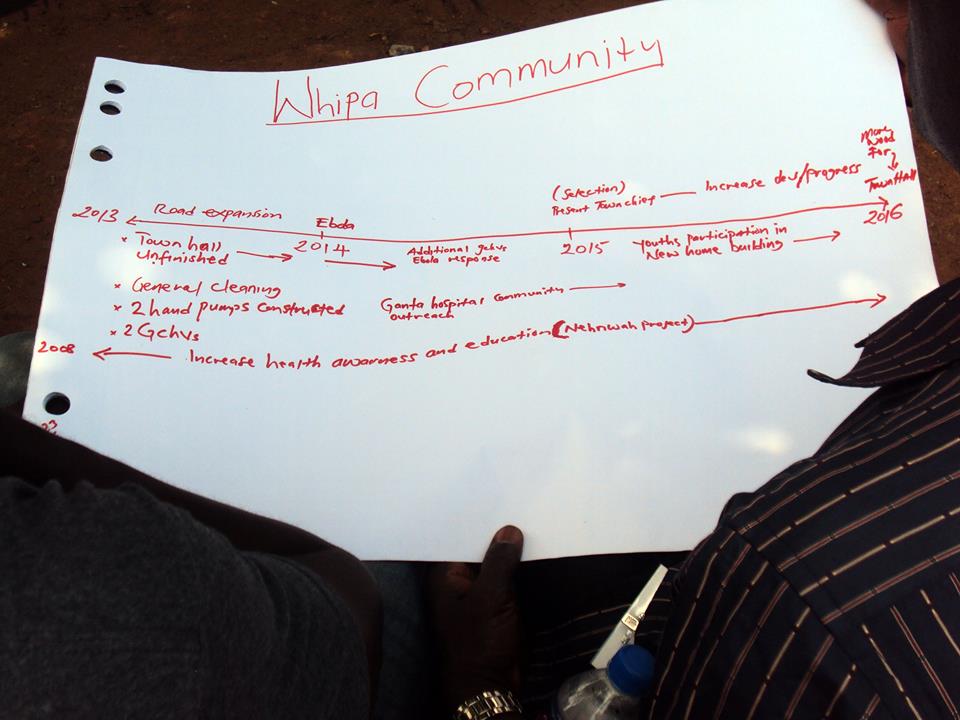 Time line of community activities drawn during SALT visits with facilitators in training in Liberia. “What are you proud of?” Photo courtesy of Luc Barrière-Constantin.