Impact Assessment of the SALT Approach

The Public Health Foundation of India (PHFI) with support from the International Initiative for Impact Evaluation (3ie) will undertake impact evaluation of the Constellation’s SALT approach for community involvement in increasing immunisation coverage in three districts of Assam in India.

The 27th February 2016, the 3-year project kicked off to share and receive inputs from government officials at an event held in Guwahati. Dr Shome, Community Processes Regional Coordinator, stressed the need for providing a space where communities can share and discuss openly. He concluded:

SALT is already there!

In June 2016, after eight months of discussions, the contract between the Public Health Foundation of India (PHFI) and the Constellation for the Impact assessment of the SALT approach on immunisation uptake is signed!

Rituu B Nanda and Bobby Zachariah, with the support of Mohamed Rafique and the South India AIDS Action Programme (SIAAP), the Constellation Global Support Team and the International Coaching Team, and implementing partners, have one year to implement the SALT approach in 120 villages from 3 districts in Assam, Northeastern state of India: Kamrup rural, Udalguri and Bongaigaon! Another 120 villages will be control villages.

Bobby will be in charge of the Share function, Rituu of Care and Learn and they will jointly Transfer the approach. Marlou De Rouw and Ian Campbell provide distance support and will join them face to face for the first Learning Event planned for October 2016 (Marlou) and for the Participatory Action Research workshop planned early 2017 (Ian). Phil Forth is team mate for Learning and Loli Rey Novoa for financial management. A group is working on a facilitation manual in Hindi.

Bobby and Rituu have already identified the implementing NGO partners. Not all NGOs that Bobby and Rituu visited will be selected as official partners during implementation. But as all visited NGOs got excited about SALT, the team made the commitment to share the approach with them in any case. An enormous effort in the already demanding partnership – but so SALT!

The team ensured Link with local government from the start. Bobby and Rituu were successful in communicating the potential of SALT – as one of the government officers said:

PHFI has done the baseline, the CLCP will start beginning of 2017, and, after one year, PHFI will do the end line impact evaluation. 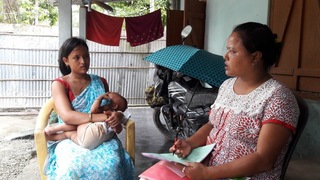 A PHFI monitor interviewing a mother at Majpara, Assam, India, photo courtesy of Rituu B Nanda.