The above mentioned event was celebrated country wide on 1st December 2010 by various organizations carrying out HIV/AIDS programs and the Kenya Long Distance Truck Drivers Union were not left behind and they celebrated the event with style.
The union with its branches along the northern corridor held processions starting from the port of Mombasa with truck fitted with banners up to Mlolongo trucks stop with the theme for this year world Aids day –UNIVERSAL ACCESS AND HUMAN RIGHTS." The procession with entertainers and acrobatic shows pulled the crowd who were curious to know what was going on. The procession went around the towns with public Address system fitted with loud speakers mobilizing the crowd and in every town we reached between 150 people to 200 people who received our messages and distributed IEC materials and condoms. 1500 IEC Materials and 5000 condoms were distributed during the procession.
The highlights of the event was held at Mariakani weighbridge where we were launching our new resource centre for truckers where we invited guests and other stakeholders collaborating in Mariakani town and local leaders and the event was attended by more than 300 people.
In Busia and Malaba the site coordinators also organized events at the trucks stop and collaborated with other stakeholders in the area to celebrate the worlds Aids day and the message was well disseminated.
We had moonlight VCT three days prior to the world AIDS day in Busia and Malaba and those who were tested and counseled and received their results were 185 clients both the truckers and the community men. Other related prevention measures and health talks were done by the site coordinators and those who required further check ups were referred to the referral hospitals in Busia district hospital and Kocholia district hospital in MALABA . 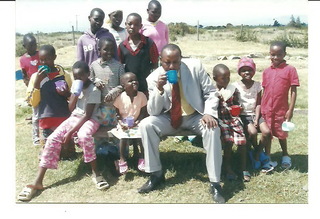 The events were successful even if there were some challenges because we were at every truck stop where we operate and the truckers supported by turning up in large numbers. The IEC Materials were not enough for those who had turned up and this was an indicator that people had turned up in large numbers. Female condoms were not available and this is a challenge which females think they are discriminated.
We are optimistic that the message was well disseminated and we hope to see a behaviour change among the truck drivers and also reduction of new infection of HIV/AIDS.
REPORTED BY –
SAMUEL GITHIRE.

I am happy to learn about this wonderful event. I have shared your blog with the India kenya learning group on HIV and truckers- http://aidscompetence.ning.com/group/indiakenyalearningtogether.

Request you to join this group and share your experiences. Merry X'mas and Happy new year.