The National Toshaos Council of Amerindian people, representing 9% of Guyana 750,000 population, wanted to take on the responsibility of addressing concerns at the governance level. The Council therefore sought the assistance of UNDP to be trained in the community life competence but also thought that this effort should be extended to the village level and used resources made available to it to do a pilot of the community life competence in four villages. This effort was to help the executive understands the effect of the Community life competence process at the village level as a model. So while the executive was trained in exercises of identification of its strengths, envisioning (dream building), self- assessment, and action planning, similar exercises were accomplished in the four villages and impact measured over four months.

One of the four villages was Capoey a village of the Tri-lakes community [Mainstay, Capoey and Tapakuma] completed the exercises. All three communities have agriculture as their main economic activity, but tourism was considered an activity with huge potential especially during holidays and Amerindian Heritage month, September, annually.

Capoey’s dream was that if there can be holistic development where families’ life is comfortable, then threats of HIV and other social concerns will be immensely reduced. Improved housing, recreation for children and youths, expanded farming with technical support, electricity, training in information technology; increased tourism initiatives and improved access road to the village were key priorities in their dream. This dream was derived seven months ago. The dream drawing was posted in the village office. The dream building exercise was accomplished with the village leader / manager, named the Toshao. One of the priority practices chosen was “Way of Working” where it was agreed that there was need to be proactive, look for opportunities that can contribute to holistic development. Being proactive they did! Three opportunities were explored. [1] The village council with support from the author wrote to the Canada International Development Agency (CIDA) for the construction of a Guest House to support the tourism effort. A five bedroom guest is currently being constructed and is 90% completed. [2] In 50 days fifty houses were constructed provided 50 families with two bedroom homes.The houses were built by Food-for-Poor Inc., an international organizational supporting local housing initiative; and [3] Persistent appeal to the Government resulted in a commitment to do the 2.5 miles of road from the main road to the lake of the village that is currently in a deplorable state.

The more immediate actions taken from the training related to the practice: “Linking Care and Prevention.” In this effort the village council would take greater responsibility for management of threats of HIV and other social issues at the village council level and develop stronger working relationship with the medex and health worker of the village, as well as forming alliance with the Parent Teachers’ Association. 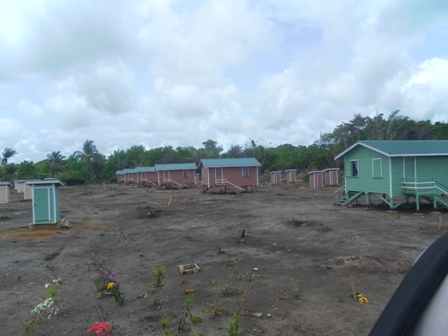 Thanks Autry for sharing. The actions are interesting as they do involve outside donors and partners, but driven by the local dream and action plan. We started in the beginning with stating that the action plans can have Small Feasible Actions (SFA) often using local resources. The facilitators in DR-Congo then mentioned that there are also Large Mobilizing Actions (LMA) coming forth from self-assessment and action planning. These involve the medium-term mobilization of policy makers and service providers to enhance the local response. This is a great illustration of this. As long as we don't adapt systems and policy with the local response, sustainability will be doubtful.

Where other people in the community also involved in the dream building (besides the leaders)?

I think it would be interested to see if people in the village share the same dream.

This is fantastic! Dreams give us a an aim to work for, don't they! In Andhra in India, a group of sex workers living in a village prone to floods would face the brunt of floods and their temporary huts would be swept away by water every year. They would go to help for their NGO which said that it was not its mandate. However, when they realised their potential to achieve their dream, they approached the local governing body of the village and were able to secure land to build permanent houses. Wouldn't it be wonderful to connect these two communities who could draw so much inspiration from each other, as I did today.

I enjoyed the photos very much as well.