Ownership of practices / elements of self assessment

A community that is competent takes ownership and responsibilities based on its strengths. In the process of being competent they build their own dream of an ideal community and develop specific actions to achieve that ideal situation. The specific actions the community develops are based on self- assessing themselves as to where they are now with respect to achieving their dream. After creating their dreams, communities could also determine the elements / practices they should work on so that the dreams could be achieved. Over two days of working with a high level team from the island of Trinidad and Tobago, a Caribbean country, Facilitators of the Guyana Competence, engaged two communities to develop their own elements / practices of the self-assessment frame work. The two teams were the Trinidad community and a Most AT RISK Population (MARP) community. The MARP community was used to practice the self-assessment for the visiting Trinidadian community. Of the two communities, participants were placed into groups of three and four respectively. Each group was asked make a list of practices / elements that they need to work on from now, so as to achieve their dream. For the MARP community, instead of dream building, they were asked to identify strengths they have in their community. So the elements / practices were developed based on using their strengths to achieve competence at managing threats of, or preventing hiv.

The different lists were collated, by ‘titling’ into one list of practices / elements. The Trinidad community came up with a pod of seven  - Ps. 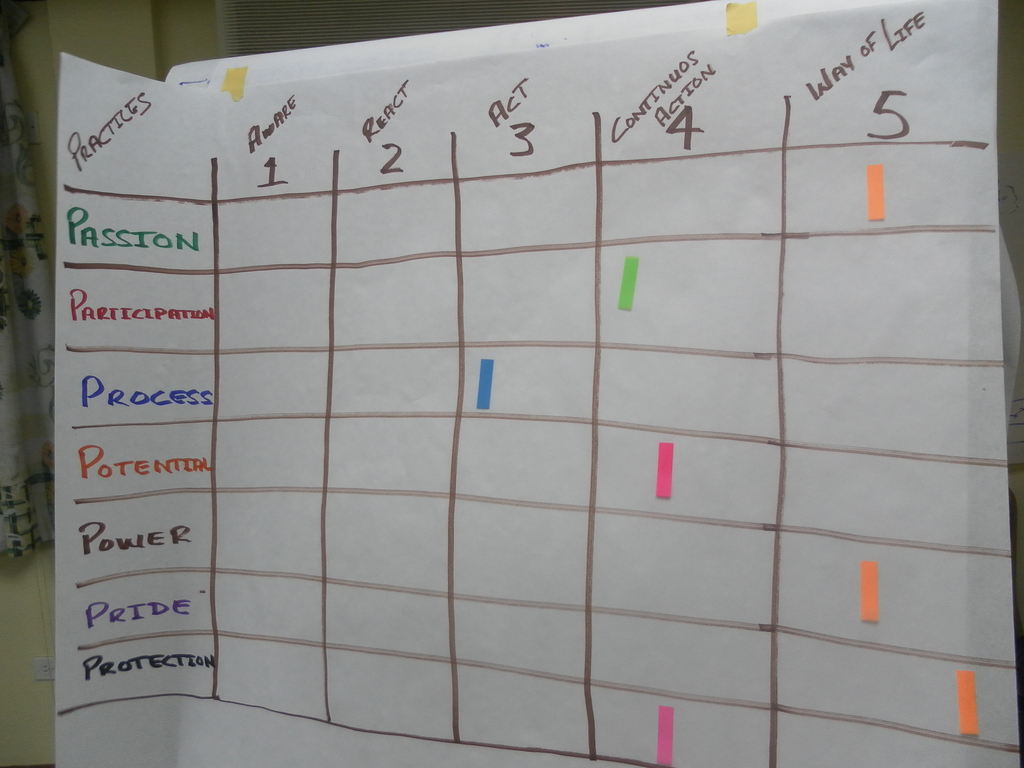 Comment by Autry Haynes on May 23, 2011 at 2:53pm
Yes Gaston, I agree. The pactices were developed from three groups work and discussion. So each P will include several elements from three presentations and discussion. The level 5 for each practice will represent these thoughts. The description will reflect these and they (Trinidadians) will continue the definition with support from GCLC. We noted the 'verb' issue (^_^)

Comment by Autry Haynes on May 23, 2011 at 2:49pm
Laurence, time was the main essence for not doing the dream with the MARP and that they (Trinidadians) worked earlier in the day with another community doing dream building. The visitors had only two days available for this.

Thanks a lot for sharing. A few questions for clarification: where both communities from Trinidad? Why did the MARP identify their strengths and not their dream?

Interesting! Was the focus on HIV? I think it's the first time that a group re-builds a self-assessment framework from their dreams. And it's interesting they came up with all these P's. I think the most important thing is whether the tool helps the community to assess where they are and they can use it to measure their progress. Often we try to phrase practices with a verb so it becomes action-oriented. As long as everybody is really clear on the meaning of each practice.

Can you share a bit more on how the traditional practices were linked to these 7 P's?