Community organises its own International Conference

“We are happy to be here at Kolkata, hosted by Durbar Mahila Samanvaya Committee (DMSC). However, we wanted to be in Washington but we were not allowed because sex workers are considered criminals” This was what I heard over and over again at the International AIDS Conference Hub held at Kolkata, India. 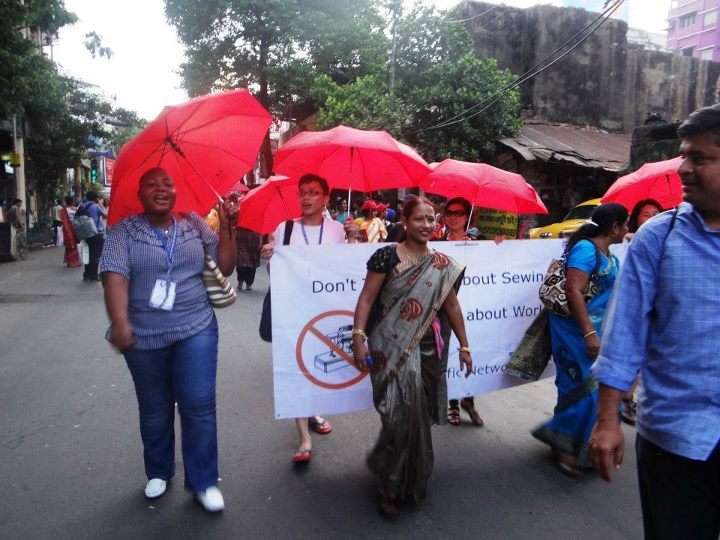 As an Indian, I was proud that India is open to all diverse groups and Asia’s largest sex worker organisation DMSC could host such a conference. Sex workers came in droves from all over the world excited with the prospect of meeting other sex worker communities. While some UN agencies and donors supported the conference, heartening was that sex workers groups also raised funds to contribute to the Conference. Additionally, sex workers were able to mobilize a large number of volunteers to provide assistance in running the event.

Sex worker groups took the lead in designing the agenda, facilitation of the event, everything... Usual conferences have a formal touch where participants sit in their formal attire. Here it was like a family wedding, a celebration with sex workers came dressed in their best. Apart from the cultural shows, what added the personal touch was the dance and music the community members would break into, the emotional slogans, the glitz and glamour and the warm atmosphere. The sex workers rally was a sight to behold as they publicly announced their sex worker status and reiterated that sex work is decent work.

During the conference, Sex workers were very active in the media as they were regularly bombarding internet with updates on the event. There was a digital connection between American sex workers at Washington and sex workers in Kolkata during the conference to share experiences and strategies. The event ended with declaration of an action plan of the sex workers, which you can read at: http://indiacso.ning.com/profiles/blogs/kolkata-platform-for-action

I came back enriched not only in knowledge about issues of sex workers but also with a large number of friends I made, the hugs and affection I received. A personal episode to share.

At the conference, a female journalist from a regional newspaper approached me. I need some information. Are you a sex worker? She asked. No, I am not. I responded. She was very apologetic. I told her “A year back I might have been furious with you but now I understand that sex work is like any other work. I have so many friends who are sex workers, with whom I share a beautiful loving relationship not because I was doing some work related to sex workers but because we connected as human beings.” The woman journalist’s reply was a powerful one- “I was shocked when I came to this conference; every sex worker is proudly claiming that she or he is a sex worker. Hearing you makes me understand that they are like any other person pursuing a profession. However, they face so much discrimination. I admire their courage”. This was also an important lesson on how when those who face stigma come out of their self-stigma and openly reveal their condition the impact it can have on them and on others around them.

As I am about to post this blog, I hear yet another remarkable news. The announcement of The Red Umbrella Fund, the first-ever global grant making collaborative guided by and for sex workers. The fund launched this year to support movements and organisations fighting for sex workers’ health, human and labour rights, and self-determination.

WOW! This is a powerful story of growth; courage; strength; openness and LOVE! Thank you Rituu for this very inspiring story and for sharing yourself with me! I am honoured to be reading this. Much Love Ze