CLCP is harvesting its fruits in Philippines

I work with The Department of Science and Technology (DOST)  in Philippines.

I conducted CLCP in picturesque Higatangan Island in Biliran province in the year 2017. The potable water was the priority dream of the community. They made an action plan and sourced out help from the DOST, Biliran Province State University and Local Government Unit of Naval, Biliran.

The Department of Science and Technology (DOST) will launch on March 4 the potable water purification project in picturesque Higatangan Island in Biliran province.Role of Dr. Romeo L. Dignos, Provincial Director of DOST Provincial S&T Center of Biliran was critical in this process. 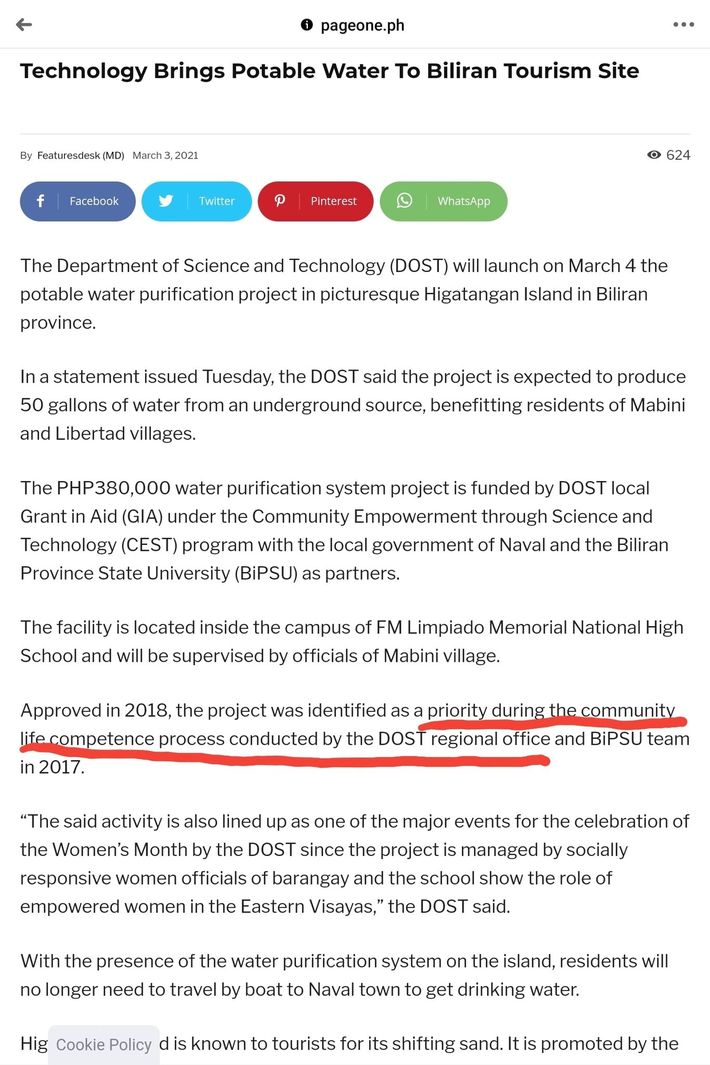 The Department of Science and Technology (DOST) will launch on March 4 the potable water purification project in picturesque Higatangan Island in Biliran province.

In a statement issued Tuesday, the DOST said the project is expected to produce 50 gallons of water from an underground source, benefitting residents of Mabini and Libertad villages.

The PHP380,000 water purification system project is funded by DOST local Grant in Aid (GIA) under the Community Empowerment through Science and Technology (CEST) program with the local government of Naval and the Biliran Province State University (BiPSU) as partners.

The facility is located inside the campus of FM Limpiado Memorial National High School and will be supervised by officials of Mabini village.

Approved in 2018, the project was identified as a priority during the community life competence process conducted by the DOST regional office and BiPSU team in 2017.

“The said activity is also lined up as one of the major events for the celebration of the Women’s Month by the DOST since the project is managed by socially responsive women officials of barangay and the school show the role of empowered women in the Eastern Visayas,” the DOST said.

With the presence of the water purification system on the island, residents will no longer need to travel by boat to Naval town to get drinking water.

Higatangan Island is known to tourists for its shifting sand. It is promoted by the local government as a premier destination in the municipality by hosting the annual Higatangan Summer Festival.

Aside from shifting sand, the island also houses the sunken chapel which features a 12-foot cross and eight benches symbolizing the eight towns in Biliran province — submerged 25 to 30 feet within the snorkeling and scuba diving site of the island. (PNA)

Thank you for telling us of this great achievment.

It is inspiring to hear that people are take giant steps towards their dream.