Learning from applying SALT in Catalonia. (it follows the previous post on Who are we?)

(AER) some interesting challenges to reflect upon:

Thus in multi-stakeholders projects, it seems important to reflect on How and when people should be included, is something that cannot always rationally be planned.

Holding the INTENTION for inclusion at the right time and place, that would be a guiding principle. Noticing signals of the field: what is the emerging process?

In Tarragona the emerging process was the creativity and new ideas on options to articulate that differ from those that had been boosted in other provinces by the government. Thus, meeting and exploring this emerging process without government representatives seems to have had amazing results. 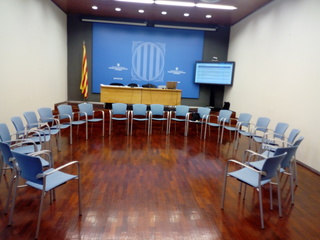 Photo: reframing the allocation of chairs from linear/classical listening to panellist into a participatory SALT approach to learn from the “Local Response” already existing.

As we have shared with other SALT facilitators supporting the SALT on-line course that we are engaged in The Netherlands:

“As much as we aim for an egalitarian dialogue, that shouldn't obscure the impact of rank and power distance/power structures. The government has a very specific position in the field, which implies the authority to allocate budget and make various kinds of decisions.  Stimulating dialogue on equal footing is important. At the same time we need clarity on roles, authority and the like, in order to build trust among parties and partners. Pretending equality when there is an actual power distance (different ranks and decision making authority) can be very detrimental. I have seen a lot of trouble coming from 'fake democracy'. . . “ (Birgitta Schonmaker)

While not denying the huge strides that Kerala has made in the health and development sector, we must be graceful to acknowledge the achievements of others too. For, SALT teaches that we must appreciate. Also we must be wary of comparing apples with oranges.

Let us appreciate first for appreciation sake, for:
Life is a constant conflict between our Appreciation and our Ego.
Appreciation is an attitude, an expression, a look, a touch...
Thus, while Appreciation always stimulates or encourages,
Ego wants to receive that appreciation!

Hope you will agree.

this bla bla  is futile. come to kollam , kerala to see how political power works to bring out the creativity of the community  to serve the marginalized groups.

What is it that goes beyond roles represented in the room? I would guess if you allow the common mission to surface, people could see/reflect on how the/their role fits in the achievement of a common mission/dream.

I guess it is about honouring both the person and the role persons (have to) take up.

I guess Peter Pula from Canada must have some great insights on this as well.

Hi Noemi, I understand you invite us to contribute some thoughts here for this:

In multi stakeholder projects, sometimes for the process to be owned

What is your experience in the above? It is an important question for us. I request for your insights and experience

Just of the cuff and obviously taking some shortcuts. Happy to expand on it later if useful:

Thanks JL, and thanks Rituu, I think the topic is hugely important. For me is a crucial topic to address and learn from each other.

I have been inspired by your story JL, nicely written in your book: What makes us human? Brings reflection on the role of UNAIDS. You decided in some moment to move on without the involvement of UNAIDS. That was an inspiring part of your experience for me.
I am learning that in Salt we stress our common humanity, which we all agree is honorable and something we strife for. However, how do we facilitate when diversity and inclusion also mean different rank and privilege? How to facilitate so that we can support that everybody that would like to speak feels free to do so. Here I am willing to learn from your experience.

We frequently experience ourselves as isolated from the events around us. The communities that we live and work in and the parts that make up the world as a whole seem to be unrelated and isolated fragments of our experience. We can feel either excluded or overused by the communities that we connect with, and pressured to deal with “resistances” of groups, or pushed around by leaders who not sufficiently see and appreciate our contributions. Many cultures have myths that tell stories of how these broken parts can be brought together, showing that this process of dismemberment and rebuilding is needed as a rejuvenation process to experience ourselves as both individuals and a community. From this perspective conflict and tensions, fights and wars, competition and the desire to overcome, are holistic attempts from different parts of a collective to relate to one another, and to establish a sense of the whole. We can not not relate, and it doesn’t seem to matter to the whole how the relationship looks, as long as the parts relate to each other and exchange information. It is up to us facilitators to unfold the meaning of these relationships in a deeper way, so that the pain and friction that is part of conflict can be transformed into synergy and collaboration. How do you do it when using SALT?

I like combining SALT with other facilitation approaches (Deep Democracy) that reinforce the facilitation awareness on roles and rank present so that helps in sustaining real and reciprocal dialogue, so to support trust and the ownership process to look for a shared dream.

Thanks JL for your response. In India there are inequities, heterogeneity, power dynamics, gender, caste, religion, tribe and other divisions within the community. Keeping this context in mind, how would we bring the oneness you mentioned in your response. How would you facilitate the step one - who are we? this is a very difficult issue in India and your views would be valuable. Also in Europe, I doubt if communities are homogeneous.

One thought: As policy makers are part of the community, let us avoid dual thinking, whereby there is an "us" and "them". We are together, we dream together, and we offer our different gifts to support our collective progress towards our common dream.

Thanks Rituu, I like your comments. We have started in fact with the SALT visits from both different stakeholders and also the local government. Those were actually very important in building  trust.

Thanks for your excellent question.

I have some experience. To address power dynamics, I think the facilitator has to be aware of this but I fear that if we express this in the larger group it will further create the divide. We start from what is common as human beings that is my learning.

In the above situation, I would work a lot on who are we stage. Do a stakeholder analysis and identify different actors/population groups. Start SALT visits with most marginalized group. Then do so with other sub-groups. At some point bring them together. Don't bring them together in the beginning. In this situation I have worked with the local government. I think with the higher level of government the power dynamic will be more, and these officials will have limited time to attend the meetings.Try individual SALT visits with the government officials.