BelCompetence, Reconnecting to Reinvent a Way of Life that Allows Everyone to Blossom

First activities with SALT and CLCP: 2007

In 2007, the approach was introduced in Brussels during a training on AIDS. It immediately impressed listeners and they created BelCompetence. The association first focused on AIDS, but quickly widened its horizons increasingly to diverse challenges (asylum seekers, wellness, citizen initiatives...). The principle: a spark is enough to awaken a community. The facilitator supports the community in its path. But the approach also individually concerns us: it modifies and enriches our relationships with our loved ones (family, friends, work, and neighbours). 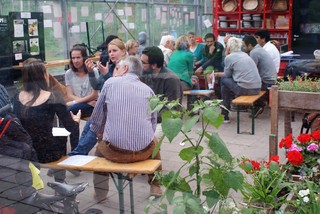 BelCompetence facilitators apply the approach in their neighbourhood and community. Jan Somers has been doing this since 2013 and Vilvoorde city officials want to see the success of the approach in Faubourg inspiring other parts of the city. In the first weekend of December 2016, the City of Vilvoorde offered volunteers training in facilitating the SALT approach.

Jean-Louis Lamboray brought together 45 inhabitants of Grez-Doiceau to develop a common dream, and working groups were formed around the various defined practices. On 14th September 2016, a first Agora Café in Grez-Doiceau was held on the theme: "Is it easy to meet in Grez-Doiceau?"

In Molenbeek, a local police officer invited BelCompetence in May 2016 to use SALT with the community to facilitate ownership and community action:

In their neighbourhood, Liza and Julien Ciarniello recounted the citizens' initiatives in Molenbeek and, since then, all kinds of actions are taking place at Rue du Spectre in Brussels.

The BelCompetence training weekends are appreciated for inspiring encounters and practical learning of the approach. Participants are invited to keep in touch and meet a few months later to tell how they have used the approach.

After training in the SALT approach of the international secretariat team, located in Belgium, the approach was gradually transmitted to all levels of the International Association of Charities (AIC). Read p. 41.

Examples of other activities:

A Belgian-Luxemburg economic mission to Guinea with SALT

The approach attracted much interest and a decision was taken to institutionalise the SALT visits in the economic missions of the Belgium-Luxembourg-Africa-Caribbean-Pacific Chamber of Commerce, Industry and Agriculture (CBL-ACP).

In collaboration with the InteractivTeaching Center, a workshop titled "Let’s Dream the World: the Jobs of Tomorrow!"

Meeting with the Save Belgium Association (Society Against Violent Extremism).

BelCompetence members met mothers who transformed their family traumas to offer the Belgian society their experience of facing violent extremism.

BelCompetence supports the initiative, which was inspired by Liza Dignac, her husband Julien Ciarniello who were with their children in Zaventem during the March 22 bombing, and Jean-Louis Lamboray. 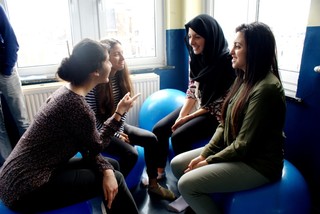 Célicia Theys and Laurie Khorchi guided young people from Brussels to the discovery of living together in harmony.

SALT training of the team of the hospital of Kirosthe in Kivu, DRC

In January 2016, Anne Brouha introduced the SALT approach to the Kirosthe hospital team.