The people from Lima join forces 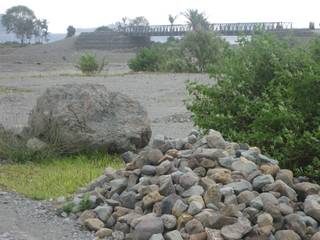 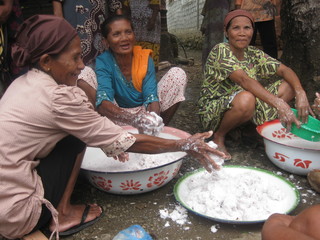 There is laughter in the streets of Lima. In front of the colourful houses of the main street a party tent made of bamboo tells us here is something to celebrate. Music fills the air and a bit further down a group of about 50 women is preparing food in many colors and tastes together, in huge dishes and cooking pots. The inhabitants join forces when there is something to celebrate: a marriage this weekend!

Life is good in Lima it seems. Look at the sea, the view. The sea brings fish, the forest brings fruits and spices. The architecture of the village is smart: cool air coming from the sea gives a welcome refreshment. So does the smile of the boy playing with a stone.

Who would tell that barely three years ago the kind inhabitants of the small Ambonese Muslim village were victim of a disaster. A dam burst caused an enormous flooding that wiped away the houses of 400 families. Fortunately all people were evacuated in time. But where once were houses, streets, a school and the village health care centre is now a large spooky open space between mountain and sea.

The newly chosen village head explains how the people of Lima, supported by government funding and some private initiatives came back during the last three years. The people of Lima also join forces in bad times. Half of the families now have newly built houses, some left the village to find fortune elsewhere. Almost 200 families though are still living in improvised housing and tents. A sustainable solution for them is more difficult as they don’t own land, nor have money to buy land. The villagers are now looking for support from outside to help the last families to settle in safe houses too. Besides they are considering enhanced (fair) trade of their nutmegs (nutmeg trees are surrounding the village in abundance) to gain income to support from own resources.

The village school also is still housed in tents. Two classes per tent, with broken floors and a torn paper schoolboard. But school teachers don’t forget to work from the individual strengths of the young students. Om the tent wall we see how young students present themselves with a nice picture and the things they are proud about.

Life goes on in Lima village. Time to join the party.

We invite you to support the fair trade nutmeg process financially. See salt4spices.weebly.com to find out how.

L for link to others for resources (experiences, skills, information, materials, finance) to support or complement the implementation of the communities' action plan sounds comfortable to me Rituu. This particular crowdfundaction is aimed to raise funds to make facilitation and transfer of the clcprocess and Salty facilitation skills possible.

Comment by wiwin winarni on February 26, 2015 at 8:47am
What a wonderful view of one side of my own country face. Thanks for sharing Marlou. I though Lima is only there at Peru. Inspiring start. Really wonder to seek for stronger support then. I am enjoying the process from your eyes, your feeling and wonderful blog. I'm waiting Marlou..

Your blog made my day Marlou. How much I loved the photos! As is the song- when the going gets tough, the tough get going.

I see your role as very critical here. I have still not understood link in SALT. The support you are providing the communities in connecting with outside world, crowdfunding...can we call it link?

Thank you Marlou for keeping us posted! We are there with you.