So i am a very late in sharing my experience in Lethem. Sometimes we fail in telling a story when at the right time, it has dawned upon me that time waits on no man and that we should tell even if its in a couple of words the story. I have been busy, yes, but i could have made the time to share the story. Better late than never...

Travelling in to Lethem was a nightmare, the journey was long and tiring; what it does however is provide lots of time to reflect on life and what it has in store. Sometimes we sit and wait expecting results without going after those results. Travelling through the long dusty, most times bumpy ride through the rain forest is one that presents you the reality of life in remote communities. Lots of times the rulers of the day decide on matters while sitting in their soft cushioned chairs in airconditioned offices for these communities, not venturing throug the trails to visit these people; and if they do its by a plane ride into the community for a couple of hours. 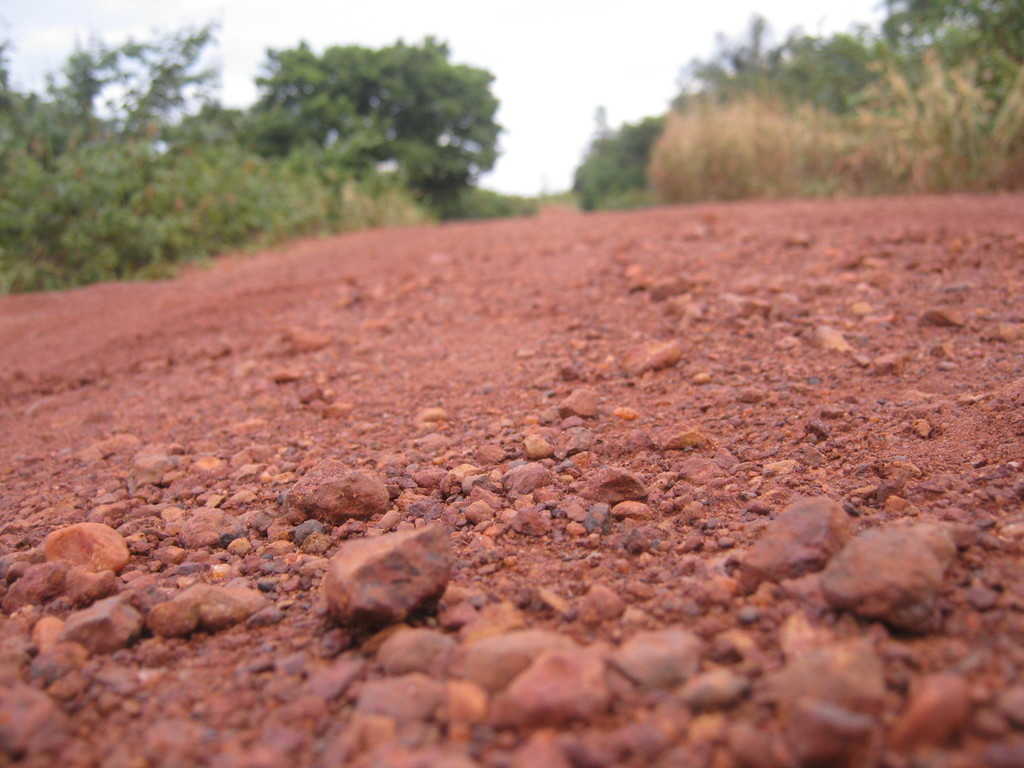 So My ride was a nightmare because the tire of the minibus I was travelling in suffered four puntures which we had to fix. Luckily on our fourth puncture when we had no other spare, a bush truck came to our rescue to help us put air in two of our tires and the spare we were putting on; if it were not for them we would have had no choice than to sit in the scorching sun to wait on another minibus to lend us a spare to get into Lethem. We finally made it however after several hours, we were finally in Lethem....YAYYYY!!!! 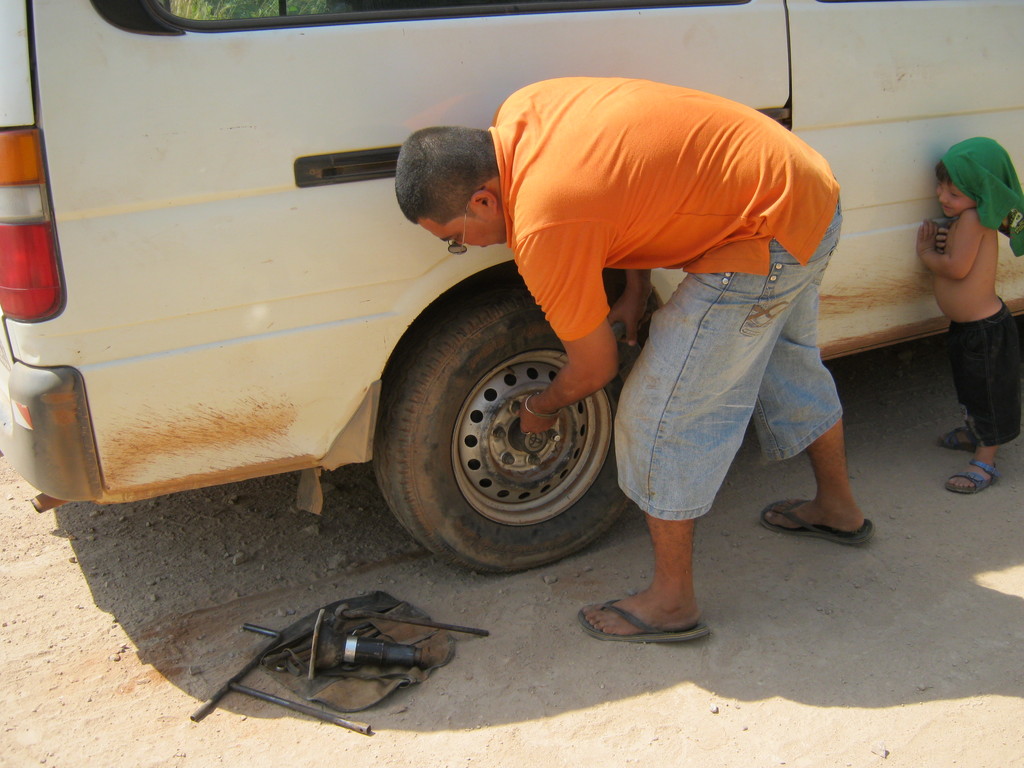 My purpose in Lethem was to train new volunteers who were local to the region and were recruited to help us spread the HIV message in their communities and other communities in the locality. One of the reason for using volunteers from communities is that the understand their environment, the language,the traditions and culture of the people. We have found in the past that certain messages are better shared by locals. I personally have found for me it is easier for me to connect with Amerindians(indigenous) because I am familiar with their way of life, for I am of Amerindian parentage as well and have grown up in our way. It is easier for me because I know both sides of the fence; yes there is a fence, there is a divide, it cannot be seen but can be felt. Some of these divides cannot be bridged, like language for example especially the Amerindian ones, however we can still work with the people by providing the in formation and skills to those that can assimilate and have them pass on to the others. It must be noted that our ways of doing it is never the only way of doing it and we too can learn form their ways of working.

So I introduced Aids Competence Process to the group of six volunteers on the last day of training; we were going to use that entire day to go through the SALT process. I started by talking about the AC concept, what it was and also talked about the constellation. We then got into the answering the question "why are we human?" Following are some of the responses. I still believe this is one of the best ways to get people connecting with that part of themselves that sometimes we forget exist; those things that make us humans. Following are some of their responses; 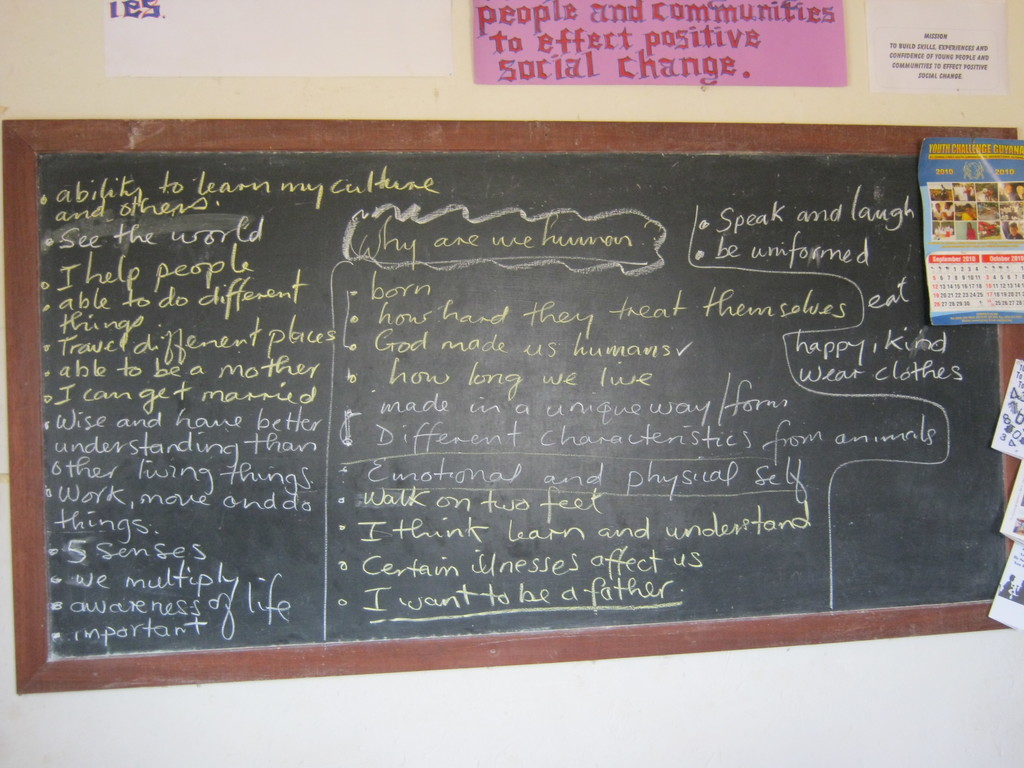 It must be pointed out that questioning someone's "humaness" will bring out varied answers, because its is at that point in time that people consciously think about who, what and why they are. Its funny that we go though phases of our lives without really knowing who we are, we just live. We focus on those around us and do not take the time to reflect one "me".

Thank you for the pictures. So often life comes down to a long road and a flat tire. I am glad that you got to Lethem.

I like the metaphor of the water and the steam. You want to bring the water to the boiling point to get steam and then the steam will do the work. But what do you think we need to get the steam? What do you mean by our way of thinking? What does it include and what does it exclude? I think that this is an important question and I would be very interested to learn from your experience on this matter.

Comment by Gaston on May 23, 2011 at 8:00am
Thank you Michael. really interesting metaphor of the kettle you use. And great to see the local action sprouting from the facilitation.

The reason I asked about the word limit is because I typed a lot more than what got published, only about half of what I typed appeared.

Because my organisation has a regional office in the region it is easier for us to keep in contact. I will share some more on what they would have done since, their training. They have been very active and are currently working on restarting a community play park that has been non functional for the last couple of days. They have recognised their strengths as a group and working on getting the community behind them. As it unfolds I will keep you updated.

There is no word limit normally. Perhaps you can edit your blog and add it? Alternatively add the rest in a comment.

I really like your sharing Michael. Great story-telling, good pictures that give me a feel of the situation and a depth in the analysis. It shows how these exercises can tap into the potential for transformation, not just change. We had a long discussion with our 'Learn' team last week on our ways of working. Our conclusion was exactly what you shared: It must be noted that our ways of doing it is never the only way of doing it and we too can learn form their ways of working.

1. What is your experience in transferring ACP in a limited amount of time? Did you focus on the ways of thinking and working or did you also introduce some tools?

2. How do you stay in touch with the trained volunteers once you leave? We have worked in remote areas before (and are still doing this in Suriname). What works well to keep the human connection?

Is there a word limit to blogs? i just realised some of what i typed is not here?