“Thailand and Brazil are very close!”

The three of us looked at each other with confusion when we heard that sentence said by Father Anastasio Roggero of the Church of Our Lady Glorious Infant Jesus of Prague.  Dusit and I were visiting the church this afternoon when somehow Dusit got to talk with the Father who was from Central Africa and who was excited to hear that we were from Thailand.  When he learned that Dusit was Catholic, he seemed very pleased and said “Come with me.  I have a gift for you”. Then he turned towards me and, upon hearing that although we were a couple I was Buddhist, smiled and said “I have a gift for you too”.    So we followed him to the Sacristy.  There was a lady there, who apparently had been speaking with him earlier and who was waiting there for him.  He told the lady that we were from Thailand, and told us that the lady was from Brazil.  Then he said that sentence,  “Thailand and Brazil are very close!”.  To say we were surprised was an understatement.  No, no, our countries were far apart.  We were in different continents.  We tried to explain.  But the Father smiled and insisted, “Thailand and Brazil are very close!”.  He pointed to Dusit, then to the lady, who was standing next to him, and said again, “Thailand and Brazil are very close!”

As I quietly watched the Father bless the lady and Dusit, I felt a deep sense of peace and joy in my heart.  We were from different countries which were far apart geographically but we were close spiritually.    More importantly, we recognized in our heart that we were more similar than different, that we were closer to each other than we were far apart.   The recognition of our bond of common humanity was joyful, peaceful, and very powerful.  We are all human.

The Father did give us his gifts.  But maybe he did not realize that he gave me a valuable gift this afternoon:  another way of looking at ourselves and affirming our common humanity.  But maybe he did.   Thank you, Father Anastasio!

By the way, the Father and the Brazilian lady happily gave me permission to photograph them with Dusit and to write about this experience.  So here’s the photograph.  You can see that Thailand, Brazil, and Central Africa are very close! 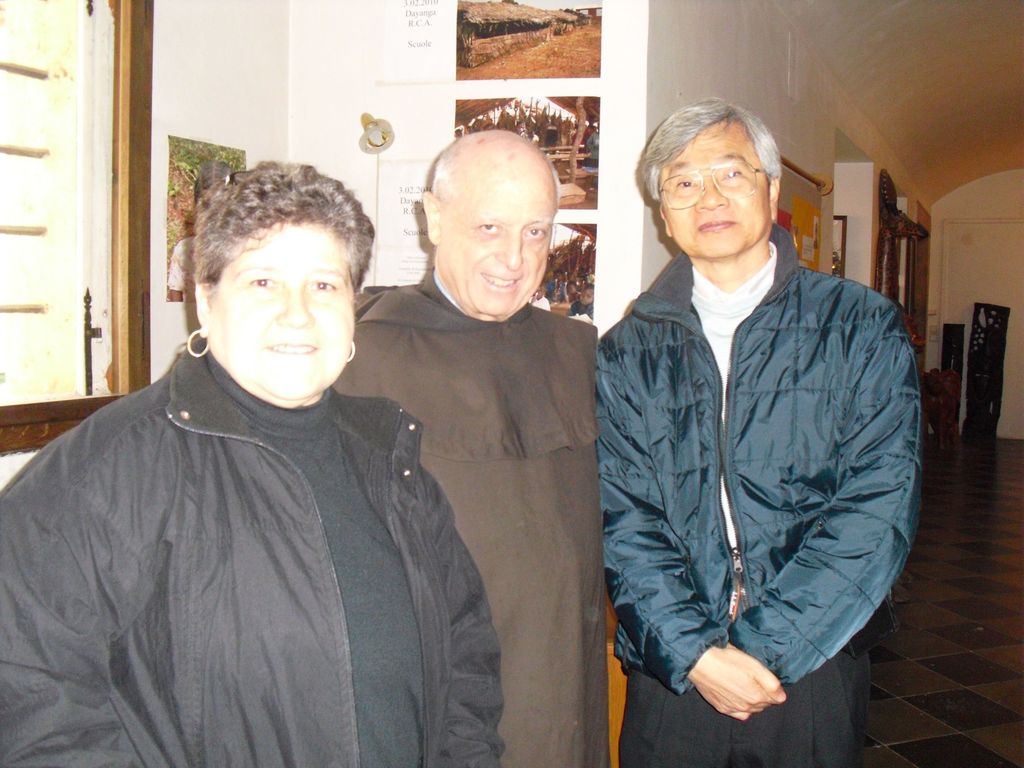 But that was not all.  There was another important gift I received from the experience:  another lesson on humility.

When we and the other visitors tried to explain to Father Anastasio that Thailand and Brazil were in different continents and so far apart, it reflected our understanding that the Father got his facts wrong, and that we knew better so we tried to correct him.   Of course it turned out that WE were wrong and that HE actually knew better.   It was not just that we referred to different frames of reference, but his frame of reference was of a deeper, more meaningful level than the one we used.   We were referring only to geographical facts and knowledge that we knew, but he was speaking with the wisdom that went beyond facts into the realm of spirituality and humanity.  More importantly, his wisdom was expressed with a kind, gentle, knowing smile that reflected his understanding and appreciation of our vulnerabilities and susceptibility to facts as well as our capacities for higher, deeper understanding.

Another reminder to be constantly humble, because someone else always knows better than us :-)

Comment by Joy Ferriols-Pavico on November 1, 2011 at 1:04am
i read your article and was quite touched and humbled. I got to understand another side of you. I assumed you are Buddhist but was not quite sure why you seemed to have a deeper understanding of Christianity as I would have expected. So Dusit is Catholic, that explains it. Thus, I keep in mind your message, " to be constantly humble, because someone else always knows better than us"

Comment by Ian Campbell on October 31, 2011 at 8:26pm
Seems to me that this is what CS Lewis meant in his title 'Surprised By Joy'.

Thanks for this posting Khun Usa. Every new year Dusit and you gift us with a pearl of wisdom and its good to have one more. You end the blog with a very striking message-" because someone else always knows better than us" I am citing a quote which I found in an evaluation book I am currently reading.

Don’t be proud of your knowledge,

Consult the ignorant and the wise;

The limits of art are not reached,

No artist's skills are perfect;

Yet may be found among maids at the grindstones.
Ptap-hotep, Egyptian teacher, 2540 BCE

Comment by Sirinate Piyajitpirat on October 31, 2011 at 3:24pm
Thanks very much Usa for sharing such a beautiful and meaningful story. I also learn from it.

Comment by Gaston on October 31, 2011 at 8:29am
Great story Usa. What is tells me as well is why Jean-Louis, but also myself have a little not on our desk which says: Are you sure? Often we think that our perceptions of something, somebody or and event is the objective truth. We make assumptions and we all know what is the result of that.