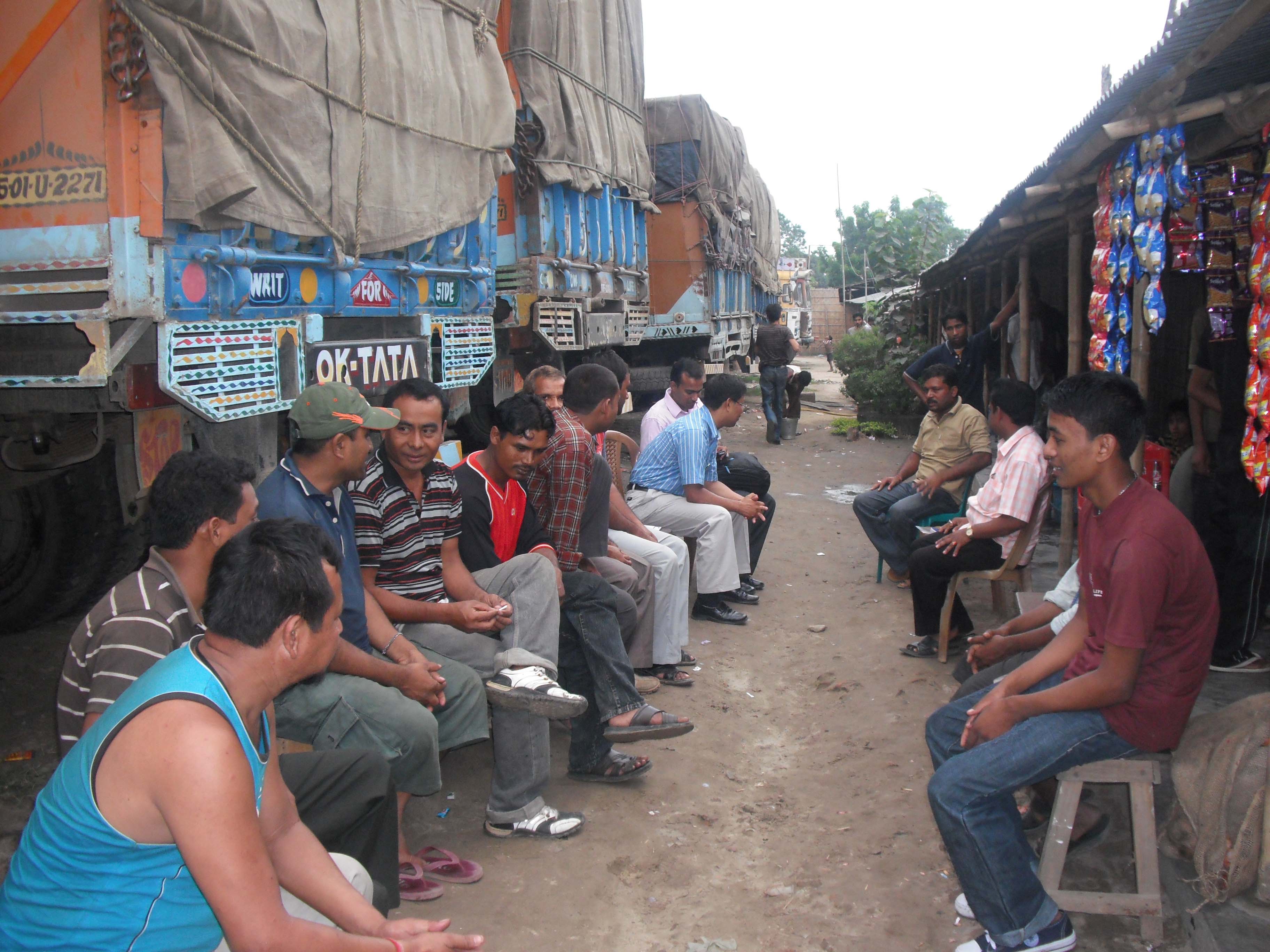 Hello all,
Below is the summary of the SALT visit conducted by teh Truckers TI Team and the ACP Team in Nagaland led by Bijoya, the project Manager of Truckers TI.

An exploratory SALT visit was done on 5th November 2009 at 3:30pm to Lahorijan, the parking area where trucks from various part of the country are stationed on the National Highway 39. The drivers were busy cooking and getting ready to work. The team comprised of Bijoya from NEDHIV Truckers Targeted Intervention project –Nagaland, Parvez from AIDS Prevention Society Assam and Bobby Zachariah from Constellation.
The parking lot is maintained by a Mr. Sopan who used to run an automobile workshop himself, but decided to do something when he saw one of the truck drivers badly beaten up and looted by highway robbers. He said that he does not gain any profit from the station as his charges of Rs. 30.00 per day (similar places charge about Rs. 100.00 per day) including accommodation and parking facilities just covers the cost. He is happy that his place is safe and provides a place of rest and relaxation for the drivers and that he is able to help many needy people whom he meets here. He has kept the place ‘clean’ from the influence and practice of sex workers as well.
The parking lot owner, the drivers, helpers, and garage workers gathered around in anticipation of an awareness session on HIV. We however introduced ourselves and started sharing about the hopes and concerns in each other’s family and professional life. They shared how eager they were that their children be healthy, educated and eventually become professionals. One of them is saving money to buy a truck.
One of the drivers from UP state expressed sadly - “our lives are worse than the street dogs” as they are harassed by cops, militants, and local goons all along the highway. They also had the feeling that their profession commanded no respect and they don’t want their children to be in this profession. To keep themselves healthy, they cook their own food instead of eating in the roadside dhabaas (eateries) which also helped some of them not to be tempted to the Sex Workers. One of them shared how he changed his behavior of visiting sex workers ten years back, so that he does not bring HIV and such illness into his family. He advices his colleagues to follow his example or use condoms, if they are not able to avoid having sex. He felt helpless that this is the most that he can do and that people need to take responsibility for their own behaviors.

The Panditji – a Brahmin Driver from Bihar said that use of mobile phones also helped them to stay connected with their family all the time, helping them to avoid temptations for sex. He told that he knows a driver who is HIV positive but won’t disclose his name and has no feeling of discrimination. He eats, sits and talks with him. He even guided his friend for the use of ART.
The truckers encouraged and facilitated the conversation amongst them. The team used various languages – Hindi, Assamese, Bihari and Manipuri to converse with them. The truckers also had the desire to learn from the visitor’s experience.
One of the team members remarked how silent and non cooperative the truckers were when another group had come in for the purpose of doing a survey to collect information from them, but the SALT approach has helped them to open up.
The truckers were excited to learn and share their experiences with their counterparts in Kenya by the Indo-Kenya video SALT visit.

Working with mobile population a challenge- Case of Kenya.

The two Networks from Kenya(Network of PLHAs and Truckers) proposed a strategy to cope with the challenge of the mobile Truck drivers and Turn boys.
For instance when they set off their journey from Mombasa heading to Malaba.All this towns are along the Northern transport corridor. They will stop over on the way, to rest, have food or sleep. Some times the trucks get delayed at the weighs bridge or their trucks breakdown on the way. The truckers will have to spent their allowance as they wait for the truck to be cleared or a have a mechanical fix.

During their journey, they interact with people a long the transport axis including sex workers. One of the Driver told us that,- some times it can take them more than a week on the road(In one country).All our allowance is finished and we end up be hospitalized by the sex workers until the employer sends the rescue team to us.They are normally not too quick to do it.

So our thinking was inclusive of the neighborhood community along the transport corridor(Sex workers, PLHas, Leaders, Unions friends and family relatives etc) So we mapped out three major truck stop along the corridor with highest number of trucks stopping in each truck stop. In our case we had Salgaa, Mlolongo and Kipevu. Recording between 350 to 600 Truck per Night.
So we had to form SALT teams in each of the 3 Locations. Teams were drawn from the truck drivers union, PLHas support groups in the truck stop neighborhood communities, People of influence like Municipality Leaders.
Part of the truckers making the SALT Team are stationed in those Truck stops. The SALT Team facilitate AC function with the leadership of a Wellness Center (Kituo Cha Ustawi) Moderator. The moderator,and as part of the team is deliberately mentoring and transferring the approach to the rest of the team members and neighborhood community.

The Mlolongo SALT team has an action plan of their ACP process in that Truck stop including establishing linkages with the MOH Machakos for referrals.

Making a difference
I remember in one of the SALT visit in Mlolongo, one drivers stood and said. I wish this conversation can be happening in every truck stop. We would really save many lives of our collegues. Today i will begin to share this message and encourage my friends on this issue.

Linked to the SALT Visit - The Secretary General(Mbugua) had this share in Video- Our Drivers are now opening up on the issue of AIDs and are ready to discuss it. Many are asking to be linked to the ART Centres along the corridor after they havbe tested for HIV in our VCT at Mlolongo. The Mlolongo VCT records a higher number of people coming for HIV Test than before. One of the evening after SALT visit 15 Truck drivers took the decision to test for HIV.
In Kikopey, Truckers and bar attendants said- we have the conviction, we would wish you came with the Test kits, we would tested now. Our challenge here is the test centers are far away.

More PLHAs willing to share their experience with Drivers. A key motivation for drivers and has helped build a lot of Resilience and hope among the truckers.

One of the strategies which was considered was to work with truckers who are less mobile and have their dwelling in the town so that discussions could be more regular and there is not much turn over. Fr. Joe plans to regularly work with one such community location to gain experiences.

The lessons learned from this group could then be used to work with the long distance truckers group.

At the long distance truckers group, we only have the hope to meet with a few people regularly - the person who runs the place and the shop keepers (2-3 people).

How does GLIA team deal with this?

Thank you for writing down your experience. It's interesting what happens when we connect with these truck drivers on a more human level. I am wondering what is the next step. Did they or the team agreed on a next visit? It is always difficult to get these same truckers in a next visit. Perhaps you have ideas on this?

Comment by bobby ramakant on November 11, 2009 at 2:22pm
Dear Joe,
so many thanks for sharing your experiences with time spent amongst truck drivers. I come from UP and what particularly strikes me in your commentary is the narrative in a very humane interaction with the truck drivers with dignity. You reminded me of my own SALT visit in December 2007 where the golden value of LISTENING was so much core to all what we did - and opened the gates to learn and further my own understanding of issues and recognize the strengths of the communities.

Big thanks again for making my day Joe,
warm wishes, b

Comment by Laurence Gilliot on November 11, 2009 at 8:48am
Excellent! I feel like being there with all of you... I can picture myself sitting with you on a little chair, listening to the truckers stories. I feel proud of the truckers as I read this blog because they find solutions in their own way. They use the cellphone to stay connected, they cook their own food to avoid temptations, etc. They really care for their families.

It reminds me of a SALT visits we did in Burundi in May where the truckers also explained all the things they did to avoid the temptations: watching TV in their room until the desire for sex would be gone, playing games like billiard, sleeping with two truckers in one room to help each other not to bring any girl in the room at night, etc.

Thank you so much for sharing this incredible experience! It makes my day...