SALT VISIT with patients at the Ministry of Amerindian Affairs, Amerindian Hostel

The Guyana Faith-and HIV Coalition with Group 2 in support of the Community Life Competence process held a sensitization workshop for approximately 50 Patients from five different regions who participated in  the workshop  at the Ministry of Amerindian Affairs, Amerindian Hostel to stimulate their Way of Thinking and Ways of Working towards on the topic sexual offences. 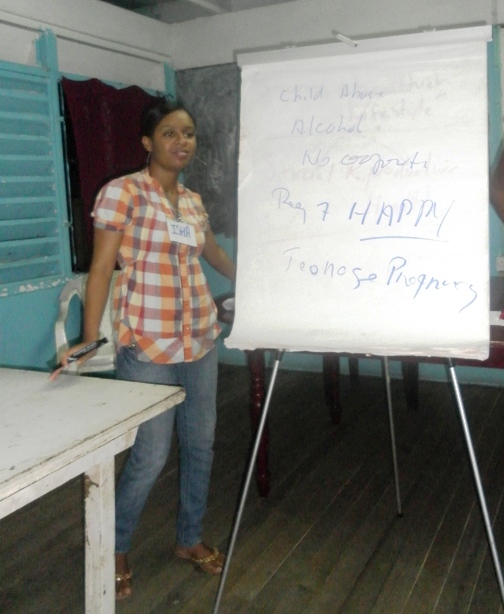 Exercise 1: The Facilitators introduced themselves to the participants then asked them to identify some concerns they might have in their respective communities. Some of the concerns were:

Recommendations: After they listed their concerns the Facilitator asked them to make some suggestions / recommendations that they feel can be done to address and reduce these concerns.

They suggested that these issues can be first address in the schools, through the teachers / parents and the councilors of the villages, also that the MOAA, MOH, MOE, MOHS&SS play major roles in addressing these issues in Amerindian communities.

They stated that a counseling system should be put in place to help the victims, also club activities should be more active for the youths and they hope for a better education for their young people

In this exercise the participants were ask to reflect on the workshop and they were very appreciative for the workshop, and even suggested we make this on a continuous activity for the Amerindian hostel, because it give them an opportunity to air some of their concerns that is occurring in the different regions.

They also suggested some other issues we can address at the next workshop such as:

Interest of the Patients at (Amerindian Hostel)

This is an interesting application. I like how you do regular reflections after each exercise you do. That's where the richness of the learning will come out. Just to understand, what do you mean with 'patients'?

Also did the group reflect on what they can do first of all by themselves to address their concerns? Advocating at MOAA, MOH and others is one of the strategies, but this becomes even more powerful when they can show that they have used their own strengths already in responding to the issue and they now request support for things they cannot do. In my experience, that's where advocacy turns more fruitful.

What do you think? And is there a possibility to further work with this group?