Sarah Mount from Anti-Slavery International invited me  to conduct a training for one of its partner NGOs, Jan Jagriti Kendra (JJK) based in Chhattisgarh (India). JJK works with communities who go to other states of India for work and end up being bonded labourers especially in brick lins.

In the learning event there were 40 participants including NGO staff, volunteers and community members.  JJK team noted that their challenge in working with communities was that community members often did not open up especially on sensitive issue of bondage. So, getting community members to take is a huge challenge. Participants from the community were a very resilient lot but during the workshop they kept saying that they were reliant and dependent on the NGO.

I introduced  ​SALT approach advocated by the Constellation which facilitates people gain competence in addressing issues troubling their community.  More information is on this link http://www.communitylifecompetence.org/en/8-community-life-competen...

The main ingredient for any social programme to succeed is that its intended participants must have a genuine stake in its success. We call this the “local response.”   To nurture and continually strengthen the local response we employ the SALT approach which is a format for a strengths-based approach. Below is how the Constellation describes SALT

A : stands for Appreciate

​We discussed in detail the power of appreciation and how appreciative questions can stimulate people to take action. What happens when we meet each other or the communities to learn and listen rather than teach and tell? When we focus on sharing and transferring what we have learned? Participants were a good mix of members from the community, volunteers and JJK staff as seen in the photo below. 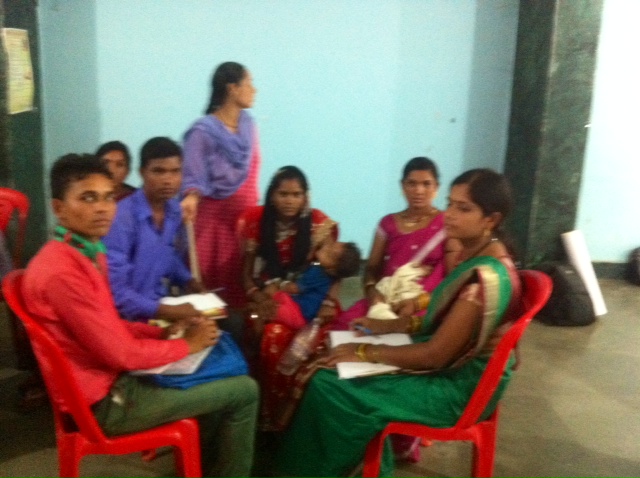 Then off we were for home visits to practise SALT. We divided into seven groups.  As my group went to the first home we observed several strengths in the family members. The husband and wife migrate for work for some months of the year every year and leave their children with their old aunt so that children have steady education. “We worry about our Aunt as she is old and has fallen sick sometimes. I had to return back to the village in that case.” Said the man whose home we were visiting. I thought what if the couple had a strong community mechanism for support in their absence.

Our SALT team member who is from the village, Gayatri informed us that another family was calling us to visit them. The man from the first home offered to accompany us to the subsequent home. In the second home we divided into two groups to talk intimately with male and female family members. The man who had accompanied us from the first home was there facilitating the conversation with us and then said that we needed to visit a few more homes. I can take you there, he said.

Now one man and woman from the second home accompanied us. We were growing to a big team doing home visits.  The final home was where we met a young girl who is a graduate.  She said, that she is worried about conflicts in the village. “I want to take some action but I don’t know how and with whom so that we can live in harmony”, she said. Our SALT team mate who is from that village and is also a young girl said she could join hands with her. Our team mate, a young man, from another village said that he can share his experience how he worked towards unity in his village. This was so evident- there were budding leaders in the village and there was another village from whom this village could learn from. We ie the external people just had to nurture this.

The next day in the briefing we developed our definition of leadership in the community- A leader is one works for social good of his or her own community. Leadership can be shared and collective. Different people can take leadership at different times and sometimes collectively. And of course, the leader should practice SALT Action plan was simple- do home SALT visits. Leaders will emerge on their own and then JJK team can support them.

SALT is the key to open hearts (lock) of the people. We do not need hammers to break this lock- said one participant. “I asked a simple question – share what you have done meaningful in your life.” “yes,” said Ruchi,” we asked the question what can others learn from your experience.” “SALT is about having conversation with the community.” Dr Tiwari.

Many said that connecting as human beings helped them to have conversations with the community. “A lady hesitated to invite us to her home. But then I told her that we are your guests, won’t you invite us and she smiled and opened the door for us.”

“We used to go as NGO staff, we had forgotten that everyone has strengths which come out when we go with the attitude to learn.” Vishnu

Manju Gardia who heads JJK concluded that now that we have seen so much potential in the community, we need to use SALT to support the community.

(Thanks to Jan Somers, Kaj Voetmann, Ian Campbell, Gaston Schmitz and Sarah Mount for their inputs on the process)