SALT for Green Villages in Maluku

We (Eden, Vittoria & Loïs) are three friends that met through our studies at Amsterdam University College. To complete our bachelor, we are required to do a Community Project. This project does not per se have to be linked to our respective majors, but should enable us to engage at local and global levels and to demonstrate personal and social responsibility. As we were already familiar with the Constellation’s approach and some of us already applied it to a certain extent both locally and abroad, we were very certain that we wanted to work using the Community Life Competence methodology and philosophy.
Through Marlou we came into contact with Green Moluccas, an umbrella organisation that connects all sustainability-driven initiatives in Maluku (East Indonesia) in order to make the fight against waste mismanagement a collective and constructive one. As we brought forward and explained the Constellation’s approach to facing societal challenges, the initiator of Green Moluccas (Kees Lafeber) enthusiastically suggested to identify key people in each community for whom this process could truly facilitate their initiatives, or even trigger motivation.

For our first project, we focussed on “Ouw Bersih”, an initiative led by third generation Moluccans raised in the Netherlands that aspire to contribute to the development of the place they originate from, and identified the main flaw of the village Ouw to be the waste on the streets and beaches. The aim of this specific project was to raise awareness among the youngest generation of the village on waste management. This generation could of course most easily be found in the village’s three schools: primary schools SD 1 and SD 2 (2 times 40 students from 7 to 11 yo), and middle school SMP (100 students from 11 to 15 yo). We were enthusiastically asked to work with all three and were allowed to intervene during two morning sessions with the students. This enthusiasm was positive because it meant that the project Ouw Bersih received a lot of attention from all the villagers as the children reported it at home. But the amount of time, amount of students and age of the students (short attention time span) also represented challenges for us as it meant that we took some decisions that would otherwise have been taken by the community itself.One such decision was to combine CLCP with Ada Lilipaly’s Koko Cacing. This is the name given to the educational material that has already been used to raise awareness on current environmental issues in some Moluccan schools. From this material, we borrowed the muppet worm Koko to approach the classroom with an entertaining information session on waste and compost. We then worked with the children on their “dream building” by asking how, if there weren’t any limits, they would see themselves and their village in 10 years from now. The second classroom session consisted of building an “action plan”, in other words the children would formulate concrete actions that they could undertake to move one step closer to their dream. Then, during the children’s free time, one such action was carried out all together as a trigger and motivation for the rest of their action plan. In two weeks, our plan is to come back to the community as a follow up, to hear from the children how and whether they have carried out the other actions on their lists.

Overall, it is important to underline our dependence on Tia Papilaya Yamarua, a student from the Pattimura University of Ambon and intern at TitaMae who kindly agreed to translate and facilitate every session we had with the children. We found ourselves to be on the same mindset, which highly improved team spirit and consequently levelled up the quality of the project. 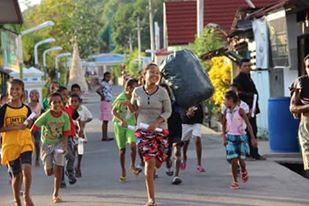 Eden Benat:
This was my second experience with the CLCP process, the first one being in Mauritius. There, the SALT method was applied on people in the village for community cohesion issues, mainly with adults. In Maluku, the SALT approach was applied on a fairly younger audience, which I think completely transformed my salty vision of things. It showed me the real scope of the CLCProcess, mainly that it can be applied on every issue and on whatever audience. The challenge for me was that we had to work with over 200 pupils. The kids were between 7 and 15 years old, which meant that their attention was very limited. We didn’t fully apply the SALT approach as we adapted it to the age of participants with the help of Koko Cacing, part of Ada Lilipaly’s education material. Adding to this, our time in Ouw was limited so we made a combination of both methods.

The SALT method was simplified into three main steps, the dream building, action plan and concrete actions. The step which struck me the most was to see how children reacted to the dream building process. The common dream all three schools had (SD1, SD2 and SMP), was to reduce environmental damage due to waste and improve the health of their families. From what I’ve experienced in Saparua, environmental and health issues are the two main burdens of the villages. Generally, I was positively surprised by how the kids outlined those so precisely, especially considering their young age. In my humble opinion, our intervention was beneficial as it only confirmed their pre-existent feeling on what is posing a serious threat to their environment and health. I also think that our presence pushed the importance of the latter problems a step further. Moreover, focussing on the youth is in a way investing in the future and as a prospect project, I think it would be interesting to facilitate the teachers of the school, in order for awareness and who knows action, to be taken more on a regular basis.
Loïs Hutubessy:
For me this first week in Ouw was a real challenge. The biggest one was to puzzle our way through the project to adapt to the group of students we were working with. We had an overload of tools and materials to work with and select from, and they were all of the same high quality. At many points of the project I wondered whether we made the right choices, and whether the combination of methods was optimal. Indeed, the puzzling meant that we made a lot of decisions on the spot, in front of the classroom. But this also made the project all the more exciting. I feel like some of these spontaneous situations could have been avoided if we had known beforehand about the short amount of time we had with the children, and the amount of children we would work with. And obviously: if it weren’t for the language barrier. However in retrospect, I am proud of how the project evolved and am thrilled to return for the follow up!
The most rewarding moment was when Tia told me that she noticed two children playing in the village. When one of them automatically threw his candy wrap on the ground, the other gave a speech about the consequences of doing so. She recognised this child to be one of the students we had in our classrooms. The picture that comes with this blog really represents the climax of this week. It was taken during the second action with both primary schools, when all the children ran around to collect and separate trash around the village. As they laughed and screamed, they propagated their enthusiasm and more importantly triggered the curiosity of the older generations. I think that our biggest achievement this week has been to put the topic of waste management on the agenda of the villagers, as it was dropped during their small talks. Making this happen through the children was an effective entry point and made it an even more enjoyable experience for us!
Vittoria Dentes:
My first experience as a facilitator for The Constellation was in Ouw for the project ‘Ouw Bersih’. We focused on raising awareness among the youngest group of people in the village on the main environmental issues on waste management that the community needs to face every day. Applying the CLCP to a community of kids from 7 to 15 years old in a classroom environment and merge it with the educational material of Koko Cacing, requires the ability to keep the balance between the attention needed for our presentation on the material and the freedom needed for students to develop a dream and an action plan through creative thinking. This, together with the flexibility to adapt to three different classroom settings, was the main challenge throughout the project.
Nonetheless, the great number of children that joined voluntarily the after-school activity organised finally showed us the concrete impact that our project had on the community. The enthusiasm and the determination of the children was indeed very rewarding, as it showed us that the community recognised its strength and used it to actively improve the conditions of the village. This excitement helped us start with the right foot for our next project in the village called Ihamahu. Here, we will carry out the same project with a very different community: six young adults (20 to 30 years old) with whom we will be meeting on Monday January 18th for the first time. If someone has any experience on working with such a community and would like to share any tips, such as activities or ideas for meetings, please feel free to send us anything!

This example is very apt for India to learn from our as our Prime minister recently launched clean India campaign. Thanks Eden, Lois, and Vittoria. What if you encouraged these communities to transfer their response to other communities? You might consider intentionally facilitating transfer to reach to many more. Warm greetings from cold Delhi!

Enjoy the pictures by Vittoria Dentes in this album:http://aidscompetence.ning.com/photo/albums/ouw-bersih.

Thanks Lois and your friends for sharing your experience in Maluku. It will be an inspiration for young people.