M. L. Prabakar of SIAAP was facilitating the final evaluation of NARI SAKSHAM, a federation of sex worker CBOs in Andhra Pradesh, a month ago when I learnt something very valuable, and striking.

He was facilitating a dream session, and began by sharing his dream of yester year – childhood days, thatched house with holes in the roof built alongside three coconut trees; the incident of fire on the table by spilt kerosene. How today he has come a long way. Even today his mother is not able to believe the way they have come forward. His father would have believed but his father is no more. Though he did not actually have a dream he had a strong motivation to “make the world look at him one day.”

The moral of MLP’s story is we must DREAM BIG! He extolled members of NS to have Unrealistic Unimaginable, and Unexpected dreams instead of being grounded in the present or past, which makes you see realistic dreams which in fact are not REAL dreams. 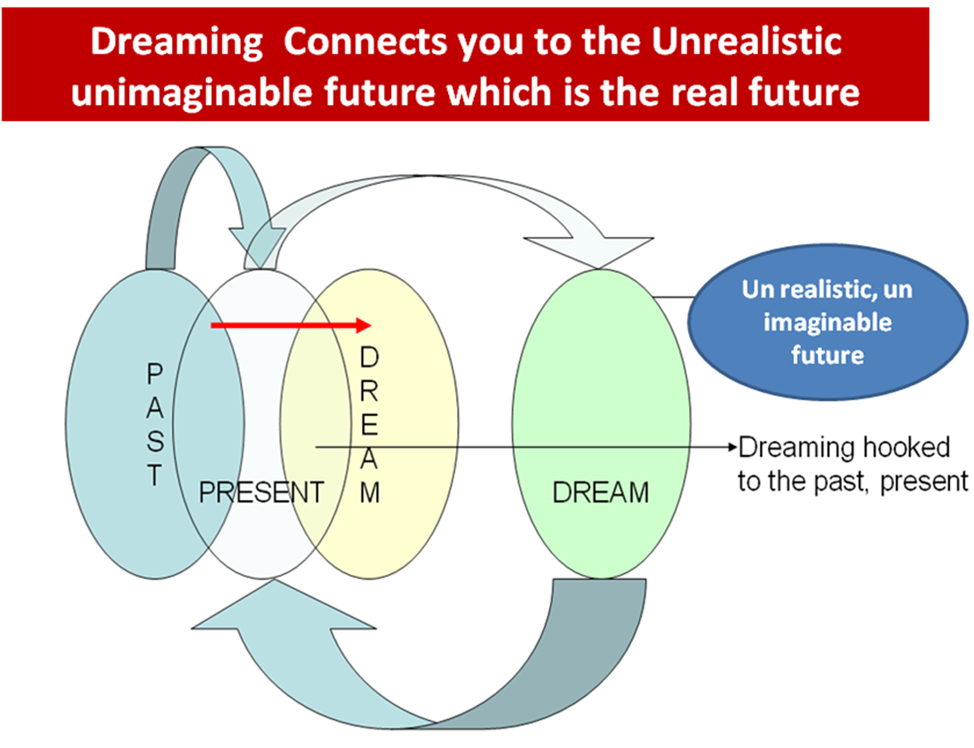 Only then the Unrealistic Unimaginable, and Unexpected dreams will shape our present towards it, as shown in the bottom arrow of the diagram.

Hope we all will be able to dream BIG as Prabakar taught me.

Indu's explanation fills in a lot of gaps. I like the examples of Kennedy and Da Vinci cause they evoke a lot of childhood memories. We cannot but agree how important therefore it becomes to unlearn the traditional method of setting "SMART" goals where we were taught to set goals that are achievable!

In the Unrealistic and Unimaginable lie the great undefined potentials. Dreams just explore them,

And without Prabakar's initial thoughts we would not have changed our way of dreaming...

You are always Inspiring. Thanks for adding on to this effort of Dr. Rafique. The term "Memory of the future" sounds very apt. About dreams I always remember John Peire Mont saying "Chase your dream, Chase it and one day you will catch it". Itched in the brains will make you chase it. Once you are determined to chase it,
it is yours.

﻿﻿Thanks for all the efforts.  You have captured it so well. I really like the picture you have done here.  The illustration is what makes it clear to understand.

Comment by Indumathi Ravi Shankar on April 11, 2011 at 4:40pm
Explained beautifully . I totally agree with you.We do not even see what is possible and available, until we dream about it. For example, President Kennedy said he would get a man to the moon in 10 years. This created a context, a process came out of this and resulted in an outcome – a man on the moon. Helicopters already existed as a possibility in the sketches of Leonardo da Vinci. However, only many centuries later was action taken to make helicopters a reality.


Every dream is to be seen as a possibility - no opinions, no discussion of application, no right or wrong. Based on our past experience we take a stand on a predictable future. But when we dream and take a commitment we take a stand on an unpredictable future. This called 'Memory of the Future'. The design is itched in our brain and we grow up with it. The context is set. We grow up processing it and achieve the goal.