GLoCon is travelling this year to many communities throughout the world, to say thank you for the courage, faith and resilience each has demonstrated, in the face of serious challenges to life and health. In 25 countries, over 30 communities will be visited, for up to a week.   The team that forms is drawn from AFFIRM facilitation associates and other people who want to explore the vision and direction of GLoCon. In short, every community counts and no neighbourhood should be left behind.  Local people in their living and work space can all respond to critical issues of health and life.  GLoCon wants to learn more about the character and the process of local community response, and the adaptation that people in policy and programme development need to make, if health, faith and life are to be truly fulfilling.
Click on the interactive map on the AFFIRM web site www.affirmfacilitators.org to see all the sites GLoCon is visiting.

Where are we now?

“The most important thing is person first”

GLoCon visited part of the interfaith network, to appreciate the histories of response to HIV of the Buddhist Temples, and the interaction between families in their homes and changes in the neighborhood. "If you can work with someone of different faith, whether we call it love or mercy, it is because the person is first", says Buddhist monk PraPaNom. The picture shows Sopa and Sangiam, some of the first volunteers to visit people; and Dara who was one of the first to encourage others to also disclose their status.  "I could not wait...I had my daughter in mind", says Dara. The flowers in front of PraPaNom are made by soybean curd paste by the young people's group led by Suchada, Dara's daughter. 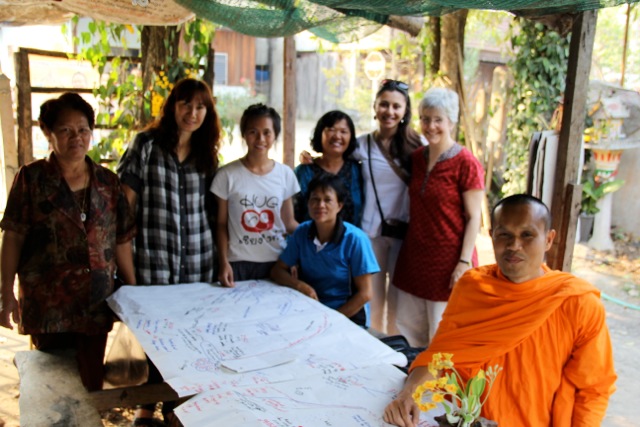 Community action is not optional

Kunming and Long Chuan, Yunnan province, China.  25 February - 2 March 2012.
When He Gan Mo took office as community leader nine years ago his village of Jinyi was one of the nmost affected by drug abuse.  "To develop the economy we must first get rid of drugs..." They created a neighborhood watch that is still active, and then expanded to take on other issues.  He Gan Mo's wife, Mme Jin is the current team leader for women's health.

“We are better now”

“The two things that helped the most were government health promotion that openly talked about the disease, and the NGO listening, helping us to communicate with each other.” The timeline shows a time of great loss and suffering, but because of encouragement and care, a path was found toward the future, which the families are taking. Themes that matter to us

Indicators of movement in Kunming: an NGO has adapted its strategy to be more community based.  Community action in Chiang Mai: a caring presence has motivated expanding change. Transfer in Long Chuan: the fight to be drug free and AIDS free has spread to other villages.

Kunming:  Periodic facilitation by ‘Home AIDS’ has stimulated the team to analyse their progress from the community point of view.  Over 10 years, the organization has adapted its strategies, using the office for respite, preparation and education, but with increasing collaboration with neighbourhoods around the city of Kunming.

Chiang Mai: “Families can care for their own members – I have demonstrated this”

Henan:  First the pain of accumulating loss from death due to AIDS paralysed, then it angered, but through accompaniment and face to face encouragement it activated the local community to care and connect and plan together.  Top down government support formed; community conversation helped bring confidence and cohesion.  Neighbourhood normalisation slowly happened over a decade.  The loss is felt, yet there is assertive hope oriented thinking and action.  “We are better now”

Long Chuan:  The fight back for drug free and AIDS free villages by visiting families, group decisions on strategy and handling threats, neighbourhood watches to build security and to offer help, enlisting allies in government, and reaching out to other villages. Outcomes are family and neighbourhood confidence, integrated families, economic initiative and improvement, better health and shared purpose.