We brought together communities through Skype

India competence is a group of people and organisations in India who believe in strength-based approaches like Community life competence. We meet on skype everymonth. But in Feb 2013 we decided to facilitate conversation between communities from two States in India- Andhra Pradesh and Tamil Nadu. It was exciting for Anthony, Prabakar and me to join in with communities on Skype. We decided that let funds not stop an interaction between us and communities. Here are the minutes and after action review of this rich discussion. 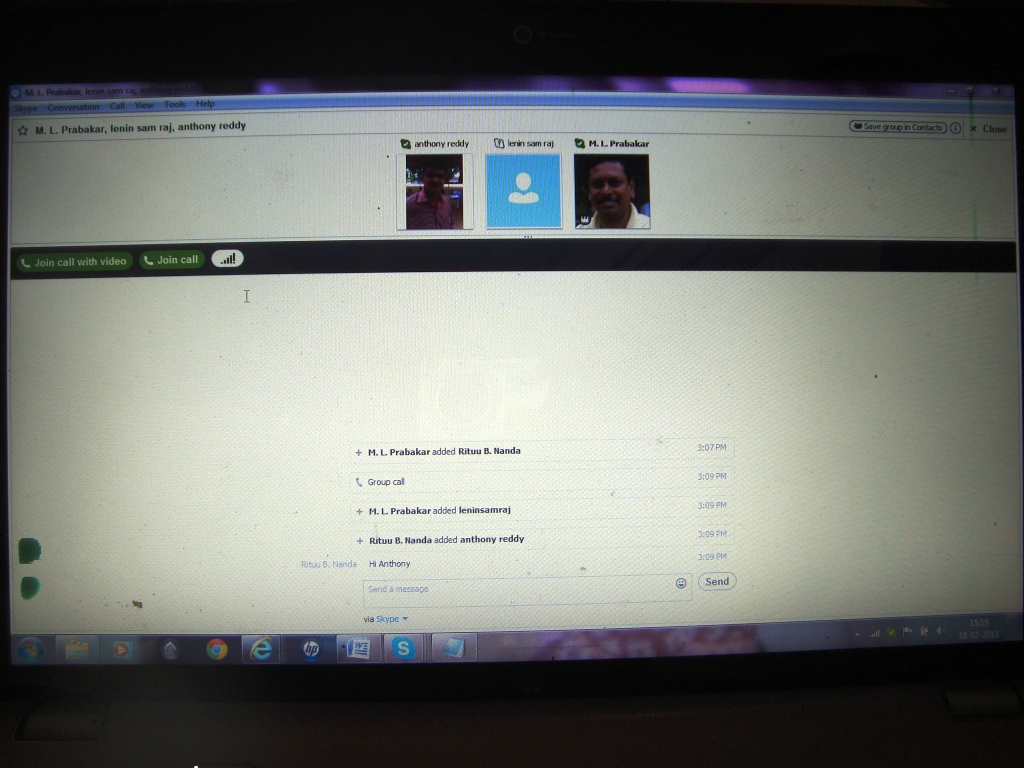 Care Saksham- Pavani is working as a mentor, she supports in conducting General body meeting, and she helps to recruit the team. We all were glad that our CBO members had an exposure to international communities. Lenin works with 4 out of 42 CBOs of FSW, MSM and transgender. After the GLF he learned the importance of appreciating and learning from the community. He shared the appreciative way of working with his team. They have started to apply SALT with communities. This helped them to garner greater support and build leadership. For instance in Mehabub nagar Jayamma a community member would contribute sporadically. In December, they formally acknowledge her support, which encouraged her to contribute more and now she has become the leader and taken on the responsibility of the Community based organisation (CBO). We also do AAR regularly now. Similarly, Care team has used SALT with Project directors of NGOs. This has led to acceptance of the communities by Project directors and of NGOs and they have begun to support the community.

Mani a community member and M&E officer of Pechan project. “we all were glad that our CBO members had an exposure to international communities”. GLF gave him an opportunity to share and learn and brought home the importance of appreciating, sharing, and learning. He has used SALT with community and non-community members. For example in their project they hired some non-community members like finance officers and there was constant friction between them. After SALT, the relationship is cordial, the non-community members have not only accepted the community but also are open to hear about their issues and experiences. This is a big thing for us, he says

James- I was new to SALT and SIAAP when I attended GLF. I have tried SALT and found that it can be useful in building relationships

Olga- GLF was a great learning for us. I work with MSM and transgender communities. We were struggling to get NGOS engaged with our communities. We tried SALT with NGO directors by appreciating the work they had been doing with women and children. Similarly, we motivated the community by appreciating their strengths. This brought them together. Now we have an example from Vellore where a NGO is helping the community to set up its own CBO.

What impact did GLF had on SIAAP, the host organisation for GLF?

Prabakar- The Project Director of SACS who had recently joined agreed to attend our event. He was so impressed what he saw that he got his wife on the last day of the event. Now he gives us time and is happy to meet and support us. The energy and the positive atmosphere in the event gave him an indication of our work with communities. It would not have worked in case of a usual kind of event. The relationship was built in short else, it could have taken months.
We had invited political leaders from the communities in the event. Now, the community leaders are supportive of communities. One of the community leaders through Panchayat funds is supporting the running of a Youth friendly counselling centre and the community is looking for ways to raise additional funds.

What strengths did we see?

What did we learn?

What can we do better next time?

This is really great Rituu! Just going through the articles...find it very interesting and also informative.

This is great Ritu,

Thanks for sharing it. Hope to facilitate more community interactions as they bring out the real power of SALT.