Chipo is 15 years old and an orphan. Her father died in 2001 and her mother died six months ago. She is caring for her little sister, Nolly, and two brothers, Farai and Edwin, as there is no one else to look after them. There is no money for food or school fees and the landlord wants the rent they owe. Mr Gift, the store manager, offered to cancel her food bill if she would ‘go home’ with him. Last week she gave in because Farai was crying with hunger and Nolly had fainted at school.

Tapiwa is also 15. He is sleeping rough because his parents and two uncles have died and his aunt, who lives far away, is already caring for her own three children and 10 orphans left by her brothers. She cannot cope with anyone else. The people of the village each gave Tapiwa a bucket of maize from their own scanty stores but he would really like to work and look after himself.

Susan is one of four women widowed when their polygamous husband died of Aids last year. Since then, the three other wives have also died, leaving Susan responsible for all the children.

The names have been changed, but these are true stories from one village in Zimbabwe. What is the way forward? How can these people be helped? These are the questions this community is asking.

Members of the Zimbabwe Salvation Army’s Territorial HIV/Aids Team, with others from the African Regional Team, the local corps officers and volunteers from the village, led by Major Norma Kwenda, the Territorial HIV/Aids Coordinator, held a workshop there to discuss these questions. The workshop was planned for 25 people but 40 community members wanted to take part.

The Salvation Army in Zimbabwe realises it cannot depend on outside support forever. The problem is too big, so we must tap into our own resources and use the help which comes from other people to increase our capacity for self-help through training and by starting income-generating projects.

This community has already established support groups for the 60 or so people who are trying to live positively with the HIV virus. These support groups help members feel less isolated and give them strength to go on. The corps officer meets many for counselling when the problems seem too great.

After the discussions at the workshop, Tapiwa has formed a team of young people to go and talk with the people who hang about at the shops offering, or asking for, sexual favours. The team wants to explain the risks to these people. Susan is leading a group of people who want to be trained as home-based care volunteers who will help those who are caring for terminally-ill relatives at home. Money received from generous donors ‘out there’ can be used to train these volunteers who will bring so much comfort and support to the community.

During the workshop, one of the facilitators was given a chicken. She decided to give it to Tapiwa. A fellow facilitator gave another so Tapiwa now has a pair. One of the teachers at the village school gave him a chicken run so now he can start selling eggs and chickens and get a small income to support himself.

Many people in the community want to know their HIV status so that they can live to stay negative, or plan their lives for positive living. A national mobile testing unit would make a massive difference but finance is a major problem.

HIV is everyone’s problem and it seems that everyone wants to do something about it. The Zimbabwe Salvation Army’s HIV/Aids team feels it is extremely important to find and use the resources and strengths that are there in every community and to complement these with the donations and project funding received from other territories. 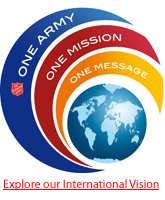