What a trip in deep rural Congo!

Monday evening, Mbuji-Mayi, the provincial capital of Kasai Oriental, a central province in the vast country of DR-Congo. Once the diamond capital of the world, Mbuji-Mayi is now home to one of the most rapidly growing SALT support and facilitation teams in the world.

I sit in a modest hotel room reflecting back on the last 5 days which were absolutely REMARKABLE. Together with a coach from RDCCompetence, Junior Kalonji, we came to support the ‘equipe de soutien’ in a health zone called Bibanga.

In January this year, RDCCompetence trained 50 facilitators in applying the SALT approach to five key family practices that, if applied, will drastically increase child survival: vaccination, exclusive breastfeeding until 6 months, bednet use, handwashing and husbands that systematically join their pregnant women to the health center. Five simple practices that will reduce infant mortality with close to 90%. That’s the data and research….now the real challenge: fostering local ownership of these practices and changing behavior against cultural practices…..at scale……

9 months down the road, results are gradually coming in. Not in every village and not in every health zone the progress is huge, but I was lucky to be in Bibanga. We met  incredibly motivated facilitation teams that apply the process in churches, schools, villages and women’s groups without any financial remuneration. That by itself is an achievement in DRC where many development programs have harmed the local non-remunerated initiatives.

Today, we met the director of the health zone center in Bibanga who provides the key health data over the last 6 months on the number of pregnant women that were accompanied by their husband to the health center. It’s a deep cultural issue that actually reduces support to the woman and the baby, prevents team work when things go wrong and research shows it has a huge impact on child mortality up to 5 years.

In January, not a single mother was accompanied by her husband. Then the SALT training took place end of January. The data after the facilitators started working moved from 15 accompanied pregnant women in Feb to 24 in April and 35 in May. SALT is gradually starting to shift a longstanding cultural practice to the benefit of child survival.

In a neighboring community, a religious group called the ‘Babas’ have resisted child vaccination for decades for religious reasons. RDCCompetence invited one of the Babas to join the SALT training and become a facilitator of the approach. Gradually his mindset shifted and he started facilitating the approach in his own religious community. Today all these Babas have their children vaccinated during the mass campaigns. Even though there are many challenges and recommendations for RDCCompetence in the implementation, these are some really good, hard data.

I also reflect on my journey to reach Bibanga. Those that know me, know that I like adventure, traveling and extreme sports. I have to admit that the trip I made to Bibanga (and back!) was a combination of all three things.  On the back of a (Chinese) motorbike for 3 hours cruising at a speed that I would consider ‘dangerous’ through sandy roads with regular slips, we made it to a large river with only a few ‘pirogues’ or big trees made into long wooden boats. We placed four motorbikes and 8 people in one ‘pirogue’ and crossed a huge river (for Dutch standards, not for Congolese standards!). Witnessing a massive snake on the other shore was not the best welcome! Then we continued until dark to reach the village of Bibanga to stay in a former American missionary house.

Yesterday, it was independence day in DRC. We were invited to the local village dinner. A plate of beans, rice and 3 big spoons of sugar was the meal to celebrate this historical day. It wasn’t my mom’s favorite dish, but again a ‘free meal’. Since I arrived in this province, I had to do my best to contribute financially to 2 meals over five days. The other meals were all generously offered by others. A hospitality that I haven’t experienced in any of the many places I have visited so far.

Tomorrow back to Kinshasa to work 2 more weeks on a Water and Sanitation program with UNICEF. I will leave with great memories, SALTy stories and a memorable travel. 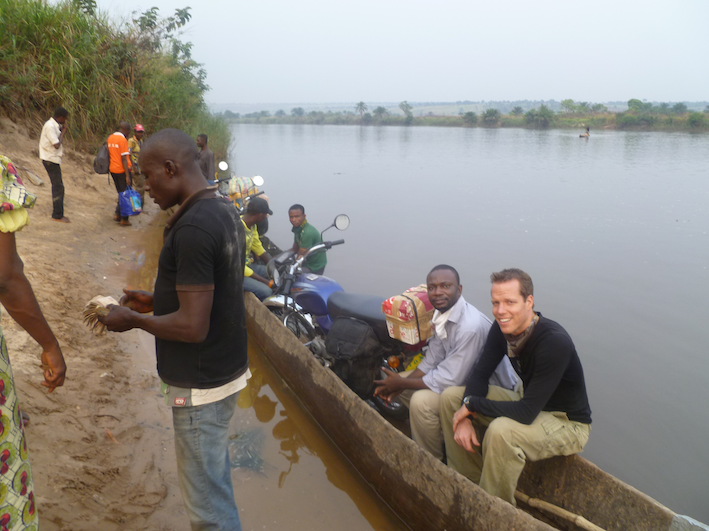 Comment by Arjanne Rietsema on July 28, 2013 at 10:48am
Hi Gaston, thank you for the story. I posted it on our internal Ning platform for the colleagues to react. We work on: http://www.worldbank.org/en/news/feature/2012/11/30/in-rural-zimbab....
I also tweeted the link, but could not find a hash tag for SALT, community life competence or the constellation? Best wishes!

great effort for child survival .  improving immunization coverage , exclusive breast feeding till 6 months  to such an deep and remote area of RDC- congo . How IYCF works .and respiratory infections control and case management through health facilitators . We mean timely referral and quality management of pneumonia's ( IMNCI ) .........  we salute to change in the community response and approach ..