The westernized nature of the #socent industry, by Akhila Kolisetty

I am a U.S. Citizen. I am relatively wealthy and educated; in the vast spectrum of this planet, I am the 1%. I am literate and fluent in English. I have connections to hundreds of middle and upper class individuals who I can gain support and funding from. I have a supportive family. I have the ability to write grants in persuasive English. I have unlimited access to the Internet and social media sites; I know how to manipulate these platforms to market my own initiatives and endeavors, if so desired.

Most social entrepreneurs and non-profit leaders today who are granted awards by prestigious foundations, who are praised for their work by news outlets, who market their organizations effectively both online and off-line are like me. They have a distinct advantage.

But community leaders and activists across Africa, Asia, and Latin America are doing just as much as American social entrepreneurs – if not more – to lift their communities out of poverty, to protect human rights, and to change the status quo. And yet, Southern activists gain little publicity in comparison to the many Western entrepreneurs who easily gain recognition after traveling abroad to do good. The difference is that Southern leaders face numerous barriers to raising funds and publicity for their work – barriers that their more privileged Western counterparts simply do not face.

Unfortunately, leaders and mobilizers from oppressed communities – the ‘subaltern’ – continue to be marginalized in this game of fundraising. According to postcolonial theorist and Professor Gayathri Chakravorty Spivak, “the subaltern cannot speak, since s/he is required to be imbued with the words and phrases of western thought in order to be heard. Therefore, the subaltern cannot be heard because of the privileged position that academic researchers and development consultants from the North occupy.”

In fundraising for development work, these marginalized groups and leaders are not heard. Many barriers exist: language, as many grassroots groups have difficulty communicating their work in English. Competing needs, as the needs of grassroots groups sometimes do not match up with the defined priority areas of large foundations. Access to technology, because many small organizations do not have access to computers or Internet on a regular basis.  And access to knowledge of traditional funding mechanisms used by donors including report writing, monitoring/evaluation, budgeting and finance. Groups are forced to “Westernize” and adopt Western language (English), internal organizational structures (hierarchical structures, formal non-profit status), and technology to gain access to the same resources.

Unfortunately, groups that are unable to conform to these standards – particularly those in rural areas, or organizations and collectives formed and led by the poor themselves – are often left out of mainstream development efforts. 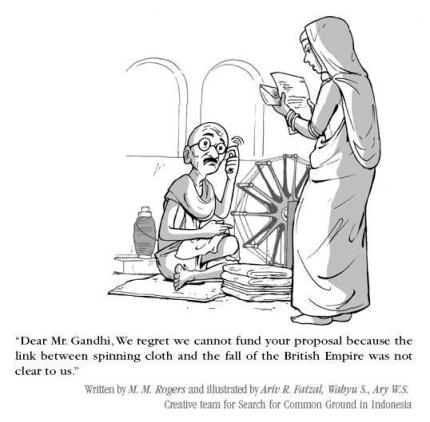 How can we begin changing the status quo?

Some examples of effective Western funders, in my experience, are Ashoka, which has done an excellent job of selecting and promoting less-known entrepreneurs and community leaders from around the world, particularly those doing effective work but lacking recognition. Another example is the Global Fund for Women, which focuses on funding small women’s groups that often do not have access to other sources of funding, and which have demonstrated leadership by grassroots women. The Fund imposes few reporting requirements, and allows funds to be used as meets the group’s needs, including for core operating expenses.

What do you think? How can funders reduce power imbalances and enable groups and leaders from marginalized communities to be heard?

(Note from Jennifer: Let me try to refrain myself from the cliché “this is one young person who is going places” routine, but I had the pleasure of meeting Akhila a few months ago before she left Washington D.C. to become a travelling-to-Afghanistan, California-loving, soon-to-be Harvard law student. She is a technical advisor and fundraiser for Justice for All, an Afghan non-profit that works to expand legal services and awareness for women and girls. Don’t miss her blog posts on Journeys Towards Justice—not just a good read, but a must read for all do-gooders.)

“With the available resources we had…”

Capillary Philanthropy: Businesses, local NGOs, and the future of aid

Do CBOs have an image problem?