The Global Village, open to conference delegates and the general public, aims to intensify the involvement of key stakeholders in the conference and in the global response to AIDS.

The River-of-Life (ROL) tool is a learner-centered approach for behavior change developed by the Kabataang Gabay sa Positibong Pamumuhay in 2008 which is aimed to enable leaders from communities of people living with and those at-risk of HIV to facilitate behavior change in a way that is fun, exciting and income generating. The tool is part of the My Peer, My Responsibility initiative of young leaders from communities of youth exposed to sex work and drug use under the Peers Enabling Each other's Recovery Social (PEERS Network) Philippines. The development was an offshoot of a grant provided by the Starbucks Youth Action Grants, the Coke Barkada award and the TAYO Awards foundation with support from the Constellation for Life Competence based in Thailand.

KGPP’s experience in using the toolkit was selected as one of the community engagement learning cases under the Community Engagement Strengthening for the Philippine HIV Response (CES4PHR) program under PHANSuP which were supported by the International HIV/AIDS Alliance. The ROL was adopted and improved by PHANSuP as a tool for measuring behavior change of clients who are reached by positive prevention interventions for the Positive Living Project supported by the MAC AIDS Fund and implemented in 6 HIV key priority areas in the Philippines namely the cities of Manila, Cebu, Iloilo, Bacolod Zamboanga and Davao.

Additionally, it was one of only 280 Global Village activities accepted for inclusion in the AIDS 2012 programme out of over 1,000 submissions. Examples of other activities at the Global Village include sessions, forums, oral presentations, awards, networking zones, NGO exhibition booths, marketplace booths, art exhibits, film screenings and performing arts.

PHANSuP, one of the two pioneer independent national linking organizations of the UK-based International HIV/AIDS Alliance is a health and development NGO with more than 19 years of solid experience in engaging communities co-create lasting, people-centered solutions to health and development inequities and disparities.

PHANSuP and the Philippine National AIDS Council (PNAC) forged a Partnership Agreement on 2 November 2010 aimed to accelerate local responses to HIV and AIDS through the “Community Engagement Strengthening for the Philippine HIV Response (CES4PHR) Program” using PHANSuP’s Framework on “Meaningful Engagement of People Living with HIV and those At-risk (MePA)” as a key strategy in initiating, implementing and sustaining an effective HIV response at the local level.

Currently, under the Positive Living Program, there are a total of 156 Positive Living advocates trained constituting 131 counselors (peer outreach workers) and 25 total of health workers from social hygiene clinics and local NGOs. Nine community-based groups across the 6 HIV key priority areas are integrating the ROL in their respective organizations and local testing centers. These are the PEERS Network based in Manila, Cebu and Iloilo, the United Western Visayas based in Iloilo, CrossBreeds Plus based in Bacolod, Vida Vivo Zamboanga, Mindanao AIDS Advocates Association, We are One for a Drug-free Cebu City and Pinoy Plus Association and the Human Development and Empowerment Services..

“The tools of positive living program are interesting and important in HIV and AIDS work. It ensures peer educators not just keep on doing peer education activities... but also reflect... document and measure the outcomes of their actions and be aware of the progress of their work and impact to their own and their group’s sexual behavior” said Dr. Antonieta V. Inumerable, City Health Officer of the Quezon City Health Department.

PHANSuP’s participation is a historic moment at the conference which highlights community-driven response and actions that contributes to the achievement of PNAC’s 5th AIDS Medium Term Plan as well as the MDG-6. The world’s attention will be on Washington in July to see how community voices and experiences valuable contribution and are able to come together to chart a path forward in the HIV/AIDS epidemic said Roberto Nebrida, PHANSuP’s Executive Director

All are encouraged to attend the Global Village Programme at AIDS 2012. Returning to the U.S. after a 22-year absence, the Conference is expected to be a landmark event. The return to the U.S. is due in large part to years of advocacy to end the nation’s entry restrictions on people living with HIV (PLHIV). This return represents a huge success for human rights and will have a positive impact on the response to HIV and AIDS both at a national and international level.

The theme of AIDS 2012, Turning the Tide Together, has been selected to emphasize how a global and decisive commitment is crucial to change the course of the epidemic now that science is presenting promising results in HIV treatment and biomedical prevention.

AIDS 2012 is expected to convene more than 20,000 delegates from more than 200 countries, including more than 2,000 journalists. As the largest gathering of professionals working in the field of HIV, including people living with HIV and other leaders in the HIV response, the biennial International AIDS Conference plays a fundamental role in shaping the global response to HIV and in keeping HIV and AIDS on the international political agenda. www.aids2012.org.

The U.S.-based Black AIDS Institute; the District of Columbia Department of Health (DOH); the HIV Medicine Association (HIVMA) of the Infectious Diseases Society of America (IDSA); the National Institutes of Health (NIH); the Office of National AIDS Policy (ONAP) at the White House; and the U.S. Positive Women’s Network (USPWN) are serving as local partners.

Get the latest conference updates and share your thoughts and ideas through the Conference Facebook and Twitter.   We are tweeting – @aids2012 – and hope many of you will tweet along with us, using #AIDS2012 to keep the conversation going. Become a fan of AIDS 2012 on Facebook and stay in touch with the latest conference updates and developments. Please visit www.facebook.com/aids2012 to become a fan.

The International AIDS Society (IAS) is the world's leading independent association of HIV professionals, with over 16,000 members from more than 196 countries working at all levels of the global response to AIDS. Our members include researchers from all disciplines, clinicians, public health and community practitioners on the frontlines of the epidemic, as well as policy and programme planners. The IAS is the custodian of the biennial International AIDS Conference and lead organizer of the IAS Conference on HIV Pathogenesis, Treatment and Prevention, which will be held in Kuala Lumpur, Malaysia from 30 June– 3 July 2013.   www.iasociety.org | www.ias2013.org 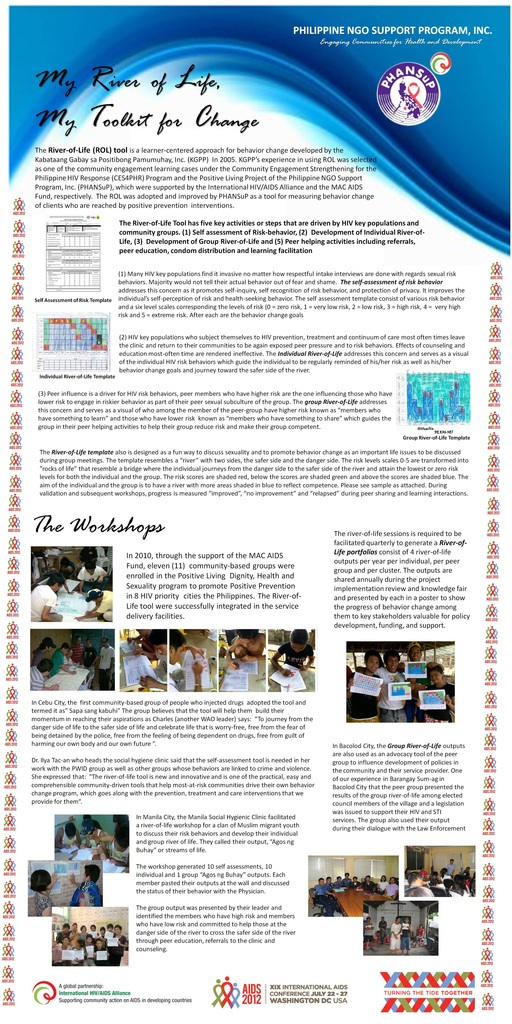