A rainy spring morning in a small village in Wallonia (Belgium), but the faces greeting us were bright and shiny.  The sun came from a different place.

And it kept shining throughout the day as we, a team of 8 Belcompetence facilitators, accompanied about 40 citizens (aged 15-70+) hailing from different surrounding villages for a whole weekend of SALT. We were off to a smooth start, as the organizers had prepared everything we needed to feel comfortable and ready to go.  Flowers on the reception desk, the badges were prepared, flipcharts up, water, coffee and tea, all ready to be served.

This was the second time Belcompetence facilitated a so-called G100, the idea being to bring together (100) citizen of any community to create a more inspiring future together.  The first G100 took place in October 2014 in another Wallonian town, Grez Doiceau, the home of Jean-Louis.

Apart from being a town in Wallonia, the two places share another particularity:  They are not one cohesive community, but an agglomeration of several smaller villages all comprised in one larger community.  This means that some of the villages are quite autonomous and single units and often quite far removed from each other.  This is also the reason why many people did not know each other.  However, as they all come from the same region, the assumption we made was that they all had similar concerns and wishes for their future.

And so it happened that the first step, getting to know each other via a human stories and sharing moments of pride, connected the villagers in a way that they found marvelous and for which they were grateful. No need to describe the CLCP process here in detail, as most of you on this site are familiar with the steps.  If not, please refer to Process tab on this site.

One particularity about this event, however, and also a great learning experience for all of us, was that the interpretation of the common dream did not exactly represent the dreams expressed by the various groups.  The reason being that the artist had created a beautifully rendered image mostly of the keywords she had heard expressed, rather than a purely visual representation of their individual dreams.

This image was met with a long and painful silence until Jean-Louis came to the rescue and initiated the dialogue between the citizens and the “image.”  This dialogue helped clarify the misunderstandings and the missing pieces and it created a “dance” between what had been said and what was represented.  To continue the dialogue in a different way, Jean-Louis invited those citizens who felt up to it to collaborate with the artist to create a purely visual and adjusted picture of their dream.  The result was a beautiful and colorful rendering of the real desires of the community. 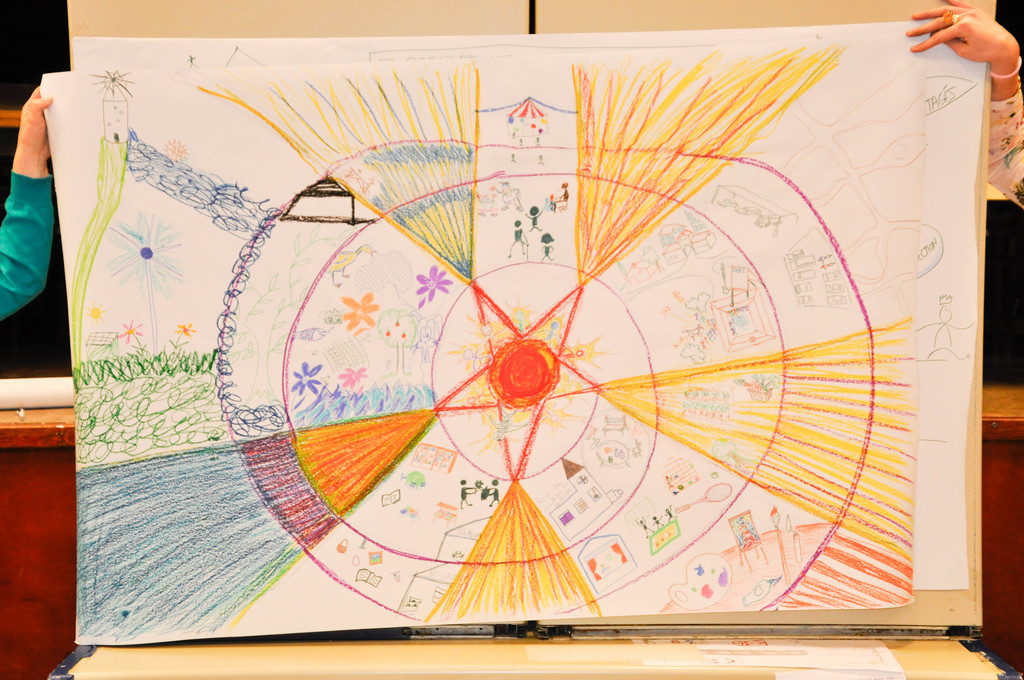 As it turned out, the initial image provided to be of great help at the later stage of identifying the practices.  Citizens, faced with the visual collective dream only, asked to see the key words drawing to help them jog their memories about what had been said earlier.

The conclusion for us was to ensure that, in addition to a purely visual representation of the collective dream, we also had a way of showing all the key words that have been uttered.

To complete the visual presentation, we decided to integrate the children's community in the exercise by gathering very creative and inspiring drawings made by schoolchildren from various primary schools of the surrounding entities. We got the chance to effectively integrate the messages of these key young stakeholders by attaching the drawings to our bodies and walk around the hall and absorb their creations. That experience made us realize how we are often constrained by our mental thinking and by our constant focus on limiting factors or practical difficulties to achieve a goal. This exercise served as a helpful reminder that pure drawings without words remain the best vehicle to express the individual dreams.

Another learning moment came after we realized that we should perhaps not have limited the instructions to six practices per group.  There were groups that had identified more and were quite attached to them, but as they had to be limited to six and prioritized, some that were important to the group had to be ignored.  The next time, we will make sure each and every practice is included and trust that during the “Bingo”* process, some will find a “home” with a similar practice from a different group.  By this I mean that it can be added to a practice that is similar and can be merged and fine tuned using elements from both. 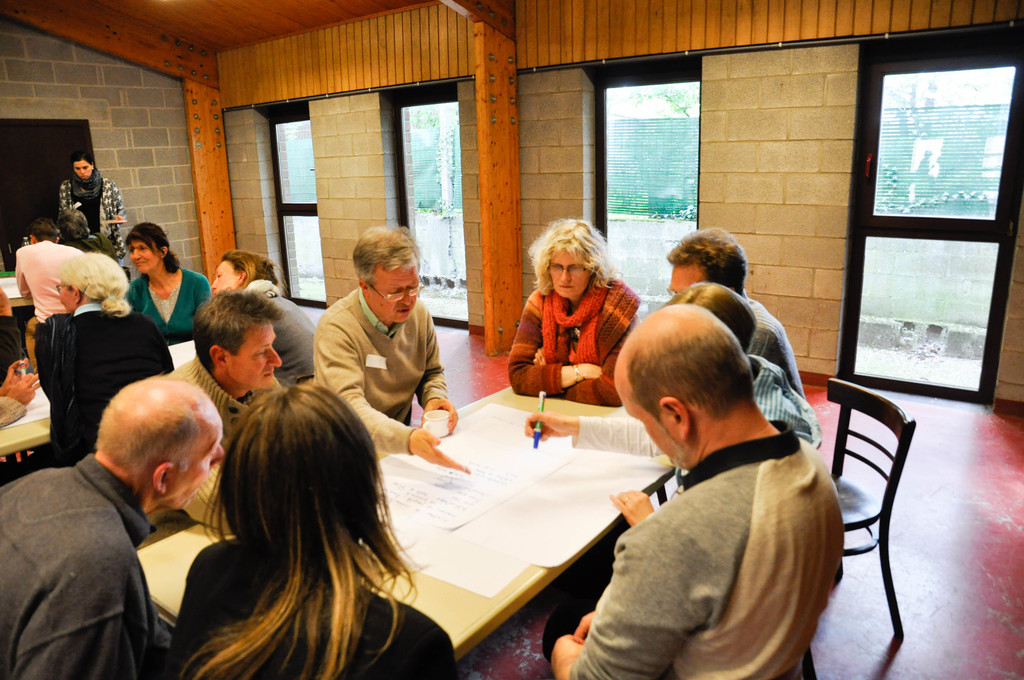 As it was, we ended up having long (but interesting and very worthwhile) discussions the following day in order to come up with the correct phrasing of practices that reflected the needs of all groups.  The outcome was a set of solid practices that everyone could adhere to and which provided fertile ground for discussion afterwards and very concrete actions identified.

No intervention of this kind would be complete without a round of reactions to the experiences of everyone during the time we spent together.  Comments like “ready to go,” “connection,” “hope,” “joy,” “moving forward,” etc. abounded. However, Veronique also picked up on one sentiment that was not expressed explicitly, namely that of being a bit overwhelmed.  She therefore had the good sense to reassure the group that in moving forward everyone needed to take care of themselves and to be sure to commit only to those activities that truly resonated with them.  A sigh of relief on my left J

In conclusion, this 2-day intervention with a conglomerate of communities proved to be yet another exhilarating and hope-inspiring  first step in a journey, not only for the citizens of Eghezée-Fernelmont, but also for each and every one of its facilitators.

*Bingo:  A simple process whereby the findings (strengths, qualities, practices, etc.) by the various groups are being shared, compared and matched with same or similar findings.

P.S. Special thanks to Virginie Dhellemmes, who made sure we were super well prepared by insisting that we had a step-by-step, minute-by-minute protocol.  Without having had the backbone of this structure, we would never have been able to improvise with such confidence.

Still full of the energy gathered during those days! I can't wait for next step, the citizne gathering on June 18!

Great idea. I will try it next time Anita. I wish I had more opportunities to learn from you. Hugs The way we do it, if and when possible, is that one person draws the common dream based on the stories and the keywords coming out of the smaller group dreams.  In this case, the artist ended up making a "drawing" of the key words.  As this did not create the feeling of complete understanding, we invited volunteers to work with the artist to create a purely visual image, which you see in the report.

I completely agree with you on the fact that this is a very difficult exercise, and we are still learning on how best to do it.  I appreciate your openness and vulnerability to tell us about your difficulty with this part.

Perhaps a small suggestion with regard to "the end of alcohol use in the village": I wonder whether reframing the statement (a la Appreciative Inquiry) might have helped, along the lines of "increasing the level of sobriety and the resulting levels of energy and health" . . . or something along those lines?  It may or may not have created more buy-in from the men.  What do YOU think?

Loved the beautiful narration Anita! The lesson you have learned is valuable on ownership of the common dream. Do you ask people to draw the common dream or ask them to include everything mentioned by all participants? I do the former but wanted to learn from you. I find it a difficult exercise. for e.g I had divided a community in a village near Allahabad into various sub-groups like boys, girls, women and men which compiled group dreams for a healthy village. One person then drew the common dream. The conversation got struck on one point. Men refused to include end of alcohol use in the village whereas rest of the groups insisted on it. Finally, I took the decision of not including this point in the dream because then the men would not have owned the dream. What do you think?