I’m currently in Santa Fe, New Mexico and last weekend I stopped in at a favorite place of mine here, the Museum of International Folk Art. A current exhibit, “The Arts of Survival: Folk Expression in the Face of Disaster,” had caught my eye and I wanted to check it out. 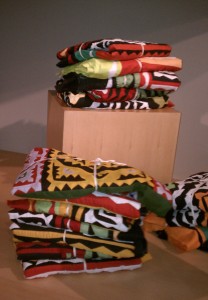 Quilts from the famous quilt-making region of Sindh province in Pakistan. In the camps set up following the floods in 2010, women turned their master needlework skills into a source of income, transforming the clothes sent by relief organizations.

The small, but well done exhibit featured artists from Haiti, Pakistan, Indonesia and New Orleans. It was the second in the museum’s Gallery of Conscience, a space dedicated to exploring contemporary social justice issues facing folk artists in the 21st century. People viewing the exhibit could pick up a flyer featuring organizations like GlobalGiving and Aid to Artisans where they could donate.

While I still don’t fully understand the differentiation between a “real” artist and a “folk artist” (are we sureit’s not skin color and level of poverty?), both were included. The exhibit was nonetheless a great reminder of the resiliency of the human spirit in the face of tragedy, and of the will to rebuild when life as we know it is no longer recognizable—a story, I believe, that can never be told enough. 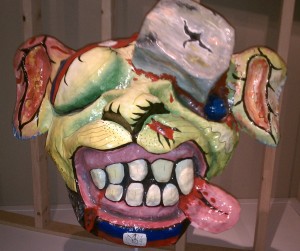 "Vision of January 12th, 2011" by Onel Bazelais of Jacmel, Haiti. With his papier-mâché mask showing an imaginary animal with a piece of rubble embedded in his bleeding head, Bazelais offers a memorial to the quake's victims. "This is our new reality, so I had to paint it."

Coming Out of the Closet

Beyond the Ribbon Cutting

For whom do you write?