This is Regina from Genoka settlement in Goroka, Papua New Guinea. Genoka is one of the most notorious settlements in the country. No NGO has entered before, mainly due to safety concerns. Only occasional volunteers distribute condoms. Genoka is now one of the exemplary communities striving for AIDS Competence. Former criminals turned into community facilitators, people take action on their concerns and Regina is making ‘bilungs’ (woven bags) and hats and sells them in town as an income-generating activity.

The WHO-UNICEF funded process in PNG has come to an end, but ACP is continuing. An external evaluation was conducted earlier this month in the five provinces with very positive outcomes. Click here for the full report. Significant behavioural change was observed with clear transfer to a wider set of communities. Recommendations were made to scale up ACP in all provinces and the establishment of a National Facilitation Team.

At the same time, the ADB-funded process in PNG is wrapping up as well. NGOs, CBOs and community people from Port Moresby came together to review the last two years and plan for the future. There was a great amount of energy and confidence in the group at this last event. Concrete action plans varied from Rahamata settlement: ‘we arrange coffee, milk and sugar for every Sunday and discuss with the entire community further steps on our response. We now have all the elements to take this forward’ to 9-Mile settlement: ‘The last peer assist really helped me to see how I can convince the leaders in my community. I’ll call a meeting with them this weekend and now know the right way to approach them’. Dozens of local solutions came from within the group, occasionally inspired by the facilitators. An incredible potential for learning was revealed between the communities and organizations. The evaluation of the event below shows that participants apparently found the event useful. People left this last event with big smiles and great confidence for the future. 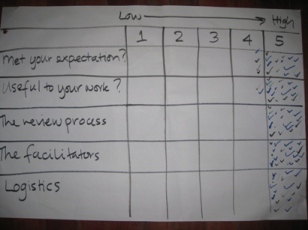 Last week, PNG Red Cross already organized and financed their first learning event to introduce ACP in 13 provinces. The event was facilitated by only local coaches and facilitators. They have organized themselves in a local entity called PNG AIDS Competence. Together with limited international linkages, capacity is now present within the country to take ACP to scale. PNG is just getting started......

Thanks for your reply and my Pidgin correction :). You're right. The beautiful bilum making is there for ages, that's true. However, I have seen in many communities in PNG (both in NCD, EHP, WHP) that through the ACP discussions people see their own strengths and (human) resources in the community and how they can be used in the HIV response. So, the carpenter in Kesi settlement now teaches young boys his skills. In other places, cooking skills are transferred to young women and also the art of bilum-making is transferred (in Walis Station, Mt Hagen). Regina confirmed the transfer as well and she said that she started seeing more opportunities to use her own strengths and now makes also clothes, besides the traditional bilums.

So ACP can stimulate inter-community transfer of certain income-generating skills IF of course this seems to be the community's priority. I have heard many times in settlements that income-generating activities could prevent the (young) women to go and sell sex. Most of the time, they know best where they need to work on.

Finally, I think all credit -also expressed in the Review report- goes to the communities themselves. We, as facilitators, only showed them their own strengths and accompanied them on their journey towards reaching closer to their dream, in becoming more AIDS Competent. I think many communities don't even know 'The Constellation' as an organization and we would like to keep it that way :)

Thanks again for your reply. It made me reflect deeper on my experiences.

P.S. Can you share a bit more about your own background and perhaps a picture? Thanks, Gaston

Comment by heather on March 30, 2009 at 1:04pm
good to hear re: National Facilitation Team. Also good to see some very PNG-specific example sof ACP. Not sure how much credit ACP can take in relation to Regina's bilum (note proper spelling)-making,as this is an ongoing traditional economic and social practice for highlands women, and has been for several centuries....

Very inspiring story. The change people have seen here, is remarkable. I really liked the confidence that people had in taking the efforts ahead even after the funding stopped. A clear demonstration of life competence.

Good to see your picture.

Thanks for this amazing story which depicts the strength of the community in trying circumstances. It would be good to post a gist of this report on AIDS-Asia e-forum for further dessimination.

Do we have a quantitative study on ACP?

PS: The picture is lovely. Thanks.