This story comes the Global Learning Festival held in Chennai in 2012. It is told by Aniruddhan Vasudevan. You can find it and many other stories told at the Learning Festival at https://sites.google.com/a/communitylifecompetence.org/the-global-l... 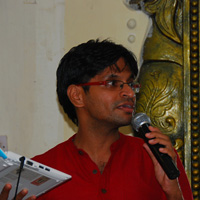 This happened in my community 2 years ago. As part of my work with communities in Chennai, I work with a team in doing crisis interventions. One day, I received a call from a man who said that he’d just then been at the receiving end of homophobic violence. Like many other gay men, he had gone to an online chat room to find a companion for sex. He found someone and also took the risk of going to the stranger’s home. There, as they were getting undressed, four or five men appeared suddenly from within the house and beat him up. They took the gold chain, ring and watch and threatened to expose him in public.

I went with my crisis intervention team to see what could be done about the case. When he met me in person he was a little uncomfortable with some of my feminine mannerisms, but I chose to ignore it. However, when my transwoman colleague, Sankara, joined us, the complainant took me aside and told me that he did not want ‘her’ to be part of the intervention. He did not want to be seen in public with her. I told him that it was not going to be possible for me to exclude her from the team and that he gets all of us handling this for him, or none.

Sankari, another colleague, Shiva and I went to the scene of the crime, an apartment in a narrow street. We introduced ourselves as human rights activists and that we wanted to find out what happened there, since we had a complaint. The guys turned out to be quite intimidating, and they argued that homosexuality was wrong, so there was no harm in punishing someone who ‘indulged’ in it. We decided to continue the conversation in front of the local police station just to give the impression that we were ready to file an official complaint. However, we knew among ourselves that it was not a real option, since the police were rarely supportive of gay persons. But we kept up the impression and managed to argue, fight and get the man’s belongings from them.

The complainant was watching all the action from a distance. Later, he shared that he was ashamed for having been transphobic. He saw how helpful Sankari had been in conducting the conversation. He also saw how we worked together and there was no hierarchy among us. Since then, he has participated in some of our meetings and tells his friends about the need to revise popular perceptions of transpeople.

What this experience taught me It has taught me the power of teaching by action and example. We had not intended to patronise the man and teach him about non-discrimination. However, seeing us at work brought about a transformation in him.

The insight I got from this experience is that I do not need to speechify all the time. Sometimes the easy way to instigate change is simply to BE that change.