Sex workers from the FHI 360 Aastha project join hands with the Police in Kamathipura, Mumbai 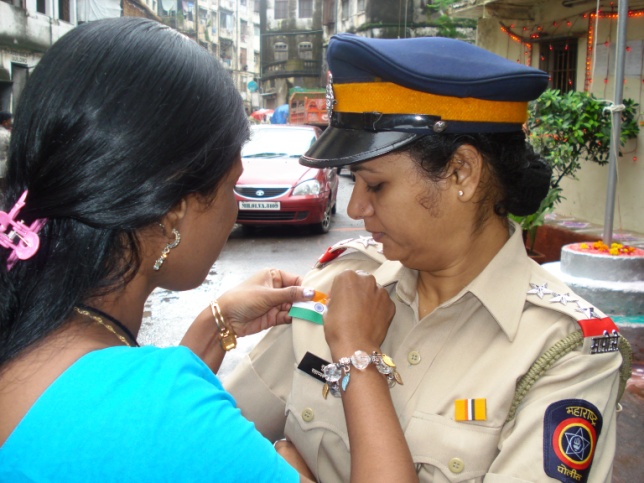 It is a special feeling for Rani (name changed for confidentiality reasons), a member of the Community Based Organization (CBO) Asha Darpan in Krishna building, Kamathipura. She had been invited to an Independence Day celebrations in the Pavvala Police Chowki. She felicitated the police officers by pinning an Indian flag. Three years ago Rani would have baulked at the idea of sharing the same dais with police officers. She had 25 other sex workers who were also attending the event and were applauding happily. It was due to the drive of the CBO Asha Darpan that these members of the support group got opportunity to attend the flag hoisting ceremony on 15th August 2011 at a celebratory event organized by the Pavwala Police Chowki.

Asha Darpan is one of the 14 CBOs across Mumbai and Thane, which together form a sex workers’ federation, namely, Aastha Parivaar. These CBOs and the Aastha Parivaar have been formed as part of the FHI 360 Aastha community mobilization process towards greater community ownership and leadership. Sensitization with the police is part of networking and advocacy process that the CBO members engage in. The CBO President, Vasanti Pednekar says, “It has been an extremely challenging experience because most sex workers, including us, were extremely afraid of the police. Most viewed us as criminals and there were cases of arrest even if we would be going about our ways or for just carrying condoms.”

Sensitizing the local police officers was important. The CBO did not immediately start by talking about how the police should not harass sex workers. They had meetings with police officers, sensitized them about their activities, organized health camps for the police and then started liaising with the police stations. This had to be an ongoing dialogue because they kept getting transferred. Building relations with police in turn helped sex workers in tackling situations of harassment, one of the many givens in their lives.

“In the past, we were not able to face the police, we were afraid to even sit down in their presence," Devta, the Vice President recalls. “Now, if a sex worker is arrested, we go and talk to the police, negotiate a bail amount. We meet them in other informal contexts too: for example, we go to the police chowki with rakhis during Raksha Bandhan.”

While the sex workers’ level of confidence and ability to negotiate with the police has improved, the attitude of the police has also changed. “From abusing and chasing us away, now the police are willing to chat with us over a cup of tea. They now use condoms for sex with sex workers, and they pay for the services. I would say that the exploitation and harassment by the police has definitely dropped,” says Vasanti.

From an unequal equation based on fear and hostility, the sex workers’ interaction with the police has changed to one of friendlier dialogue and a decline in harassment. These initiatives, among many others, have helped breaking mental barriers. Some partnerships are critical in improving sex workers’ lives.

We chose to highlight this story about the police-sex worker partnership because it is a unique and special one. Unique because this level of bonding is rare amongst those who tend to be on opposite sides and special as it has resulted in the lives of the sex workers becoming significantly easier. We hope you enjoy it. For more information on the Aastha Parivaar, please visit: www.aasthaparivaar.org