A young hairdresser Sveta from a large family in the Chuvash village (Russia) had to move out from her home village as her neighbors, friends and relatives did not accept the fact that she is HIV positive. She moved to another city, won the title of Miss Positive 2005, got married, born two children, made through the court permission to patronize her younger brother after the death of parents (according to the Russian legislation, HIV-positive people can not adopt or patronize children), established the Sveta Izambaeva Fund which helps HIV-positive women in Kazan’s, Russia…

Now Sveta fights for a center for HIV-positive mothers and their children, she educates students and volunteers on HIV prevention, mobilizes business community to work in response to HIV, actively participates in TV and radio shows…She has a lot of ideas, knows exactly what to do and how to do it. She only needs to be heard… 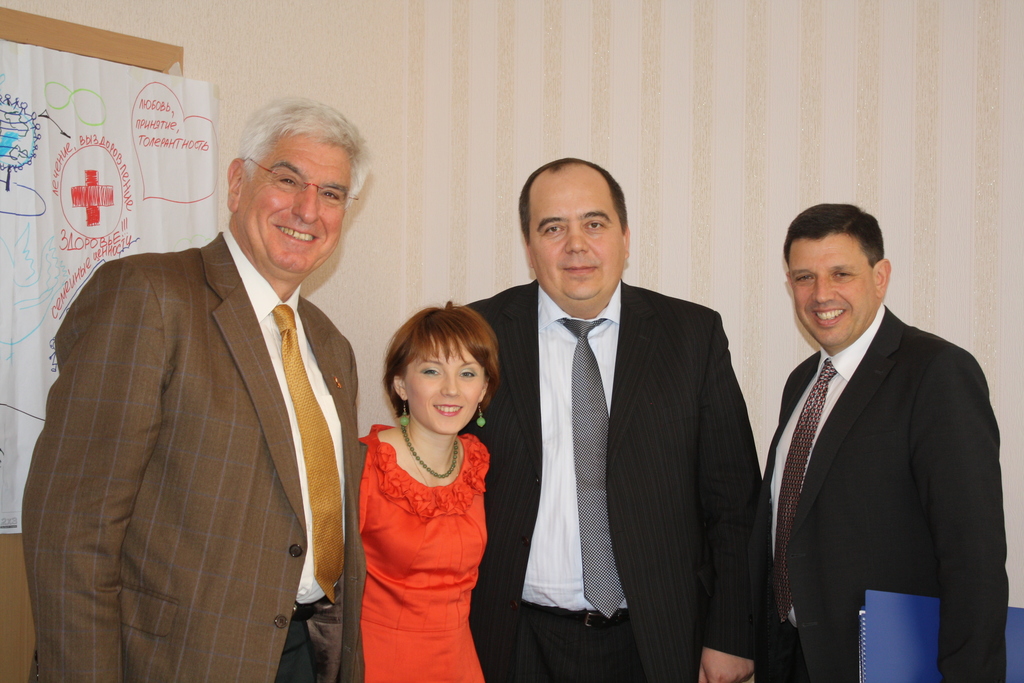 Sveta has become one of the facilitators of the AIDS Competence project, which was presented in Kazan, Russia, by the international NGO Constellation and UNAIDS. Kazan was the first city in Russia where SALT visits to local communities took place. SALT stands for Stimulate, Acknowledge, Listen and Transfer. This is an approach which helps to accomplish the main objective of the project: to mobilize the local response to the epidemic, promote community awareness of their own strengths and capacities and facilitate the exchange of experiences within the communities.

"You should not expect a solution from outside, you need to look for it in the very communities and people.” -  says the director of the Constellation Jean -Louis Lamboray. “People have enough wisdom and understanding of the risks. Our challenge is to encourage them to respond to the epidemic. Many communities and people are scattered and we have to help them to form the right connections and networks”.

Meetings with the communities and volunteers in Kazan once again proved that when a person, family and community openly acknowledge the risk of HIV and AIDS, have personal motivation and common interest, they are taking actions to protect themselves and mobilize support from their environment.

"I am a mother and grandmother, - said Irina, a participant of the SALT meeting. - I am worrying about my family and want to know what I can do to protect them from HIV and AIDS."

"If we want to get rid of stigma, we have to start from small groups - at home, at work. - says Natalia, a wife of HIV positive drug user Sergei. -  “Let’s have a discussion about it with the families in our neighborhood.”

The key strategy of the Constellation is based on the understanding that the problem will be best addressed by those who are affected by it. The role of facilitators is to identify the best ways to involve people in discussion and decision-making process.

“We are open to new ideas and new approaches, - said Niayaz Galiullin,  Kazan’s AIDS Center Chief Doctor. – It would be very useful to learn about the best practices in prevention and care and mobilize active people, as we have a lot of them in Kazan’. So, the AIDS Competence project has the potential in our region.”

The Prevention Revolution initiated by UNAIDS recently is based on the recognition of HIV prevention activism which is indispensible to overcome the epidemic.

"Thirty years experience in fighting AIDS shows that this problem can not be solved only through technology and money. - says Dr. Denis Broun, UNAIDS Regional Director. - Human potential, people's ability to effectively confront the epidemic and personal interest in solving this problem at the local level play a huge role."

The results of the AIDS Competence project  by Constellation in South-East Asia (particularly Thailand) show significant declines in HIV transmission due to the growing awareness of the HIV epidemic, increased level of involvement of people in addressing the HIV related problems. A non-profit organization Constellation registered in Belgium in 2005 operates in more than 25 countries in Europe, Africa and Southeast Asia and mobilizes the power of local communities in response to HIV epidemic.

The project is extremely relevant to Russia and to other countries of Eastern Europe which remains the only region in the world where the epidemic is still on the rise. There are over 160 HIV cases daily registered and over 590,000 people are living with HIV in Russia.

Who are the people on the picture?

THis is a lovely story, and Sveta is an inspiring person who shows that determination and tenacity do eventually lead to amazing achievements.

I like Natalia's idea - to bring together families in her neighbourhood to discuss the issue. I wonder how that first meeting went? Did they use SALT?

Thank you for inspiring me!

Touched by the bravery of Sveta.

Just today I was having a chat with Dennis Broun at the Knowledge Fair and came to know about the real situation of the epidemic in Russia. The national strategies of the government are quite different from what we have in India. Promotion of NSEP (needle syringe exchange program) and oral substitution is not adopted by the government at all. In India we have these components which makes it a different program. No doubt CLCP is a better option in such situations.

Thanks Rituu for the link

Comment by Joma on May 12, 2011 at 4:03pm
Rituu what I saw was that, the issue that they face is similar to the NE India, that is another one which connect.

Yes Joma. Today Anastasia was sharing about Russia and how culturally and socially we are so different. Yet, at the end of the day we are all human. Irina a participant from Russia says as a grandmother and mother she is concerned about her children. I am sure a mother anywhere in the world would feel the same.

Thanks Kolomiiets Snizhana for the blog .I  look forward to many more blogs and learning from the Russian team.