Reinventing Vilvoorde--One Volunteer at a Time

Picture this:  14 citizens of all ages (well, not really.  Most were aged 50 and beyond) and different backgrounds and social levels in a large room of the town’s large cultural center.  14 people who committed themselves for two full days, plus one evening, of learning about Community Life Competence Practices (CLCP).  When asked what brought them there, one middle-aged lady said:  “My feet.”  Others provided more content:  Wanting to learn something new; wanting to become involved; wanting to be actors of change in their own community.

So, to which extent were their expectations filled?  And what were the learnings, both for the participants and for us facilitators? After a beautiful framing by Jean-Louis and Jan on Friday evening about the Constellation, the meaning of our work, the process of SALT and CLCP, participants quickly learned the first important principle of community building:  Making powerful connections by recognizing each others’ strengths.  Participants were invited to choose an image, a postcard that reminded them of a success in their lives and, in pairs, talk to each other about that success story.  The room was abuzz, and even though it was 7 pm, the citizens came out of this exercise filled with energy and with big smiles on their faces.  As an icing on the cake, we were all invited to pay attention to each others’ strengths throughout the three days, note them on little cards and place each appreciation in the respective person’s envelope on the clothesline. 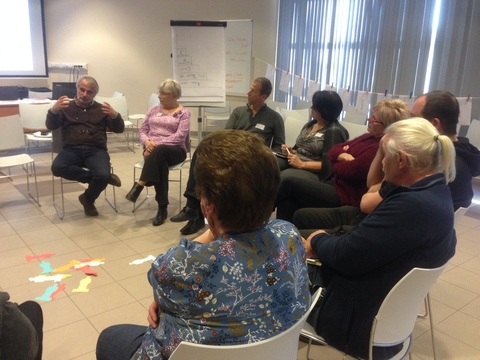 Day 2:  Everyone wide-eyed and bushy-tailed, full of expectations of what the day may bring.  And they were not disappointed.  Xenia, with her boundless energy and creativity handed a chopstick, ehem, a magic wand, to each participant and invited them to dream—and to dream big—about the Vilvoorde at its best in 5 or 20 years’ time, as it felt right for each and every one.

After having drawn their individual dreams and having shared them with one other person (using a SALT attitude) to allow them to get even more in touch with their dreams, participants got the chance to share in the plenary.  One brave citizen came forward to transform the words into an image and thus received the opportunity to show another hidden talent. 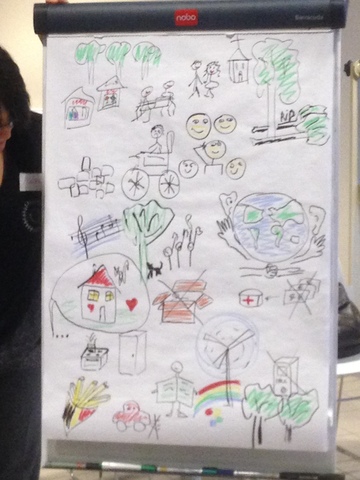 The expression on the faces of the participants revealed delight and amazement both about the idea that dreaming together can bring about such a variety of ideas and also how good it felt to be allowed to dream again.

The toughest part, as always, was to identify the practices that are needed to turn our dream into reality.  Anne-Lies did a great job simplifying the instructions of WE + verb + complement by asking people to simply explain the elements of the picture in a sentence that contains the above structure.  Participants found this tiny little hint very helpful.

Following the listing of the practices and finding the overlaps (Bingo), the citizens learned about the self-assessment tool.  Biggest learning out of this part:  The number you agree on is less important than the conversation this exercise brings to live.

Day 3: After a round of reflection on the previous days, the citizens formed three groups to elaborate the principles and concrete actions they felt were necessary to fulfill their dreams.

In order to help them to get the SALT spirit under their skin, they had the opportunity to do “SALT visits” with their neighboring groups, practicing, learning, appreciation, stimulation and transfer attitudes. It was beautiful to watch the engaged interaction with each other and the sparks of recognition and insights flying. 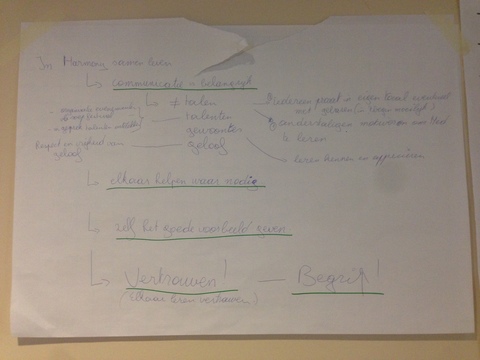 Finally, it was time to really bring it home to each and everyone, by inviting all to identify their personal practices and sharing them in the group.  Learning from each other’s motivations again brought much respect and recognition in the group and the revelation that everyone can start tomorrow with one small action that can make a difference.  Examples of these individual actions were:

And the best part:  Some comments and insights from the participants from throughout the weekend and in closing:

And finally, because every single person had been such a fantastic and motivated participant, Sinterklaas showed up and handed each their certificate of participation: 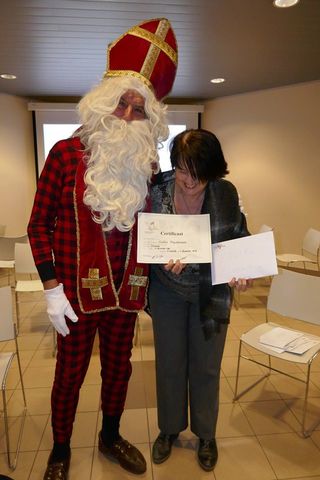 And so it ended, Belcompetence’s first facilitator training in Dutch, which closed on a high note.  We know that not everyone will step forward to become an active agent of change in the form of a neighborhood facilitator, and we also wished we had reached more foreigners and younger people, but it was a great start, an opportunity for 14 people to experience the magic of Appreciation, of Learning together, of Stimulating conversations, and of potentially Transferring that knowledge to their own context, however large or small.

To be continued with a second edition in the same town . . .

A footnote on the participants:  Even though we had a pretty homogeneous group in demographical terms, when speaking with the individual participants, we could not help being dumbfounded by the diversity of interests and talents and competences they brought with them:  A lady in her 70s who has taken at classes in at least 3 languages and about 18 different IT classes, from Word to Publisher and who in her spare time creates buffets for 100s of people. A pensioner who has worked as a truck driver for most of his life and speaks English like a charm, and he loves Algebra.  For him doing math is nothing but a game . . . The list goes on and on, but you all have stories like these, of that I am sure.

and this is what I learned

1. The Ha Ha moment came when participants drew the practices from the dream. "Oh my God, this is really about us taking action!"

2. We build a facilitator self assessment in thirty minutes, starting from the reflections of the participants about the process

3. We really need to incorporate a SALT visit in the program. Role play is not enough for all of us "to get it"