Measuring our way to inclusion

This story was told to me by the Abbot of Hua Rin Temple, Phra Athikarn Tahanawat, in 2006. I used this experience recently so that we could understand more clearly the power of measuring progress in a consistent and persistent way. I thought that perhaps it might be useful for others.

The people of Sanpatong District in northern Thailand worked long and hard to ensure that people living with HIV/AIDS were accepted by the community. In such a situation, it is easy to become discouraged with what, at best, feels like slow progress. 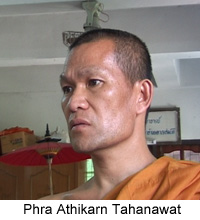 This led the abbot of Hua Rin temple, Phra Athikarn Tahanawat to devise a test to measure the community’s progress in their work to include everyone in their community.

"We had a test. And we did the test every year. At the start there was a lot of stigma and we spent 2 years campaigning extensively. But even during the period of campaigning, we noticed that people were showing more understanding. People with HIV/AIDS were staying in the family, but within the family they were still separate. They kept the spoon and the bowls separately for the person with HIV/AIDS.

So on World AIDS Day eight years ago, the first test that we did was that we invited all of the parents and all of the people with HIV/AIDS to come to the Health Centre to see whether they would eat together. And they did. So that was a success.

The next year we took a further step by not just getting them to eat together, but to get the people with HIV/AIDS to cook the food, to see whether they would eat it or not. And they ate the food.

The following year we took another step by setting up booths and selling food cooked by people with HIV/AIDS. So that was successful again.

So the next year we took a step further and we arranged for people with HIV/AIDS to set up booths in other communities and to sell their food there. We wanted to see if people would buy the food. And they did. So that was a concrete test to see how people reacted to these challenges.

And now the problem is that there is never enough food to go around.”

If you would like to read more about the work that goes on at Hua Rin temple, you might find this page to be helpful: http://www.buddhanet.net/sangha-metta/thaitemples.html