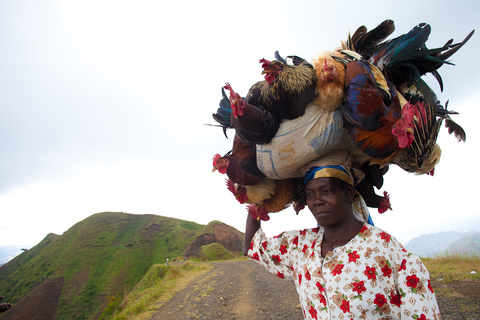 In Haiti, peasant women play a special role in the home and in agriculture. We consider peasant women as the poto mitan, central pillar, of economic activities.

When neoliberal structural adjustment programs are imposed on the Haitian government, like they have been for 20 years, they affect our peasant women. They require that the state implement fundamentally anti-peasant programs that threaten to destroy the whole peasant sector. They mean the Haitian government doesn’t adequately fund our agriculture and has left the small farmers unable to compete [with cheaper imported goods] in the local market. Many farmers are forced to abandon agriculture to go work in factories or other activities, in the cities or in the Dominican Republic. And when a man leaves the rural community, the whole responsibility falls on the back of his wife.

The Haitian society is essentially macho, and the Haitian politicians and international interests oppress Haiti’s own children. Farmers become victims again and again and women are always held back. But these women continue to support their country.

Our goal is to achieve respect for the rights of Haitian women. Despite their position as poto mitan, as the main carriers of the national economy, rural Haitian women always suffer in our society. Most of these women have no direct access to agricultural lands and income is strictly controlled by men, despite their role in agriculture.

The majority of the women working in the informal economy in the city come from the countryside. Many rural residents lost their lives because they were at the heart of the earthquake looking for employment in Port-au-Prince, working for pennies at a factory or selling bottled water in the streets. The earthquake increased the responsibilities that were already too heavy for these poor women.

I’ll repeat over and over that these women who lost their lives, their children, their husbands, and other loved ones in Port-au-Prince, lost them mainly because of lack of infrastructure resulting from the neoliberal policies in the country. But they’ll never be discouraged. They’ll always be involved in all kinds of constructive activities and keep supporting their country. After the earthquake, they went to Port-au-Prince searching for their children and ended up offering help to others who were in need. In the cities and in the countryside, these women work without rest.

We need to advance the struggle of women by redefining the concept of feminism in Haiti. To do this we have to reshuffle the cards and reduce the differences between our urban and peasant women. Right now there are two kinds of women: women with a capital W and women with a small w. Even within the women’s struggle, there are a lot of contemptible practices that have yet to be overcome. Most of the urban well-off women look down upon the poor countryside women, calling them tèt mare, wrapped head, because of the kerchiefs rural women often wear on their heads. The rich and educated town women forget that the poor peasant women make up the core of the rural communities that constitute the greatest part of the country. It’s not fair that a small minority have the privilege of monopolizing almost all of the society’s resources and wealth.

Peasant women are always present in all activities to win human rights, respect for life, and food sovereignty. October 15 was declared “Day of the Haitian Peasant Woman,” but unfortunately this day has never been commemorated. We have to recognize and appreciate women farmers for their significant socio-economic worth. We have to give them the compensation they deserve and support their efforts. We need to increase their visibility in efforts to build food sovereignty in the country. Rural women and those struggling with them, here in Haiti or overseas, need to shore up their strength. We must advocate for the rights of women.

Many thanks to Joseph Pierre for translating.

Alexis Erkert is the Another Haiti is Possible Co-Coordinator for Other Worlds. She has worked in advocacy and with the Haitian social movement since 2008. You can access all of Other Worlds’ past articles regarding post-earthquake Haiti here.

Copyleft Other Worlds. You may reprint this article in whole or in part. Please credit any text or original research you use to Alexis Erkert and Other Worlds.