Caribs is one of the nine indigenous tribes in Guyana and live Baramita Village located in the Barima / Waini Region 1 of Guyana. Baramita has approximately 3000 carib indigenous people living in 23 satellite settlements and speak mainly carib language. The Village Council is new having been elected in April 2012 but is committed to confronting the many challenges of governance and development of Baramita. In pursuit of this commitment the Council sought to develop a plan of what it would like to achieve within the remainder of its term. The Village Council agreed to develop a plan of actions of intent for 2013-2014 bearing in mind that 2015 is the year of election for the new council that will manage Baramita for another term. Community Life Competence Process (CLCP) was used to support the commitment of the Village Council by applying Community Life Competence Process with members of the Village Council over three days to develop the strategic plan, with the goal of having a plan of actions for the council for 2013 - 2015. After three intense days the Council derived it vision and SMART outcomes to achieve the vision.

The dream of the Village Council of what it would like to achieve over the period of its term in office is expressed in the vision: “The Village Council of Baramita working together to reduce social threats of ALL the people by establishing better Utilities and Infrastructure and improved Health Services, Sports, Culture, Farming, Skills Training, and Working Together among Councilors and with all 23 satellite settlements” and the Outcomes with their definition were:

Addressing the social threats such as alcoholism which was described as the root cause of the many social ills within Baramita. Suicide, abuse (drug, alcohol, domestic violence, sexual and human trafficking and child labour) as well as noise nuisance and throwing of empty beer and other bottles on the airstrip were highlighted. Developing a programme for psycho-social counseling and money management for the people of Baramita.

Improving communication between central Baramita and all 23 Settlements by road networks and telecommunication, expanding electricity including solar panel electricity, and making water available to the people of Baramita. Further, an appropriate Solid Waste Management system will be developed.

Constructing or improving the roads to all settlements, constructing a nursery and secondary schools and a teachers’ dormitory as well as wells for water and play grounds in settlements. A housing scheme will also be developed.

Expanding the current health Centre with one Health Worker to a Cottage Hospital with appropriate equipment and human resources so that ALL settlements could also benefit from a more efficient health service. Consideration for malaria, dengue and other immediate threats. Special consideration will be made for students at the primary school to enhance school attendance and performance. Sponsorship for young people interested in gaining formal education in health services.

Encourage sports as medium for engaging youths in alternative social engagement. Initially the sporting activities will include football, cricket and volleyball.

Stimulate cultural participation and involvement to support sports as another alternative social engagements as mean of sustaining the Carib cultural diversity, including dancing, singing and sustaining the Carib language. Engaging in cultural exchange programs will be conducted between regions and out of Guyana.

Developing a farming programme for providing traditional and other foods at competitive prices.

Facilitating opportunities such as mechanic, carpentry, sewing, home economics, information technology and electrician for young people and women as a mean of economic empowerment. Facilitating a scholarship programme for tertiary education.

9. Improved Way of Working among Councilors

Councilors working as a ‘TEAM’ of humans with love, respect and taking on responsibilities for specific actions taken by the Council for the accomplishment of their vision.

There were also some key decisions which included:

The major challenge was the language barrier but the strength of the Caribs helped in the process over the three days. There were Councillors who assisted in the translation, so while the process was slow it was effective as well. They were candid in highlighting their concerns as a Councilor. 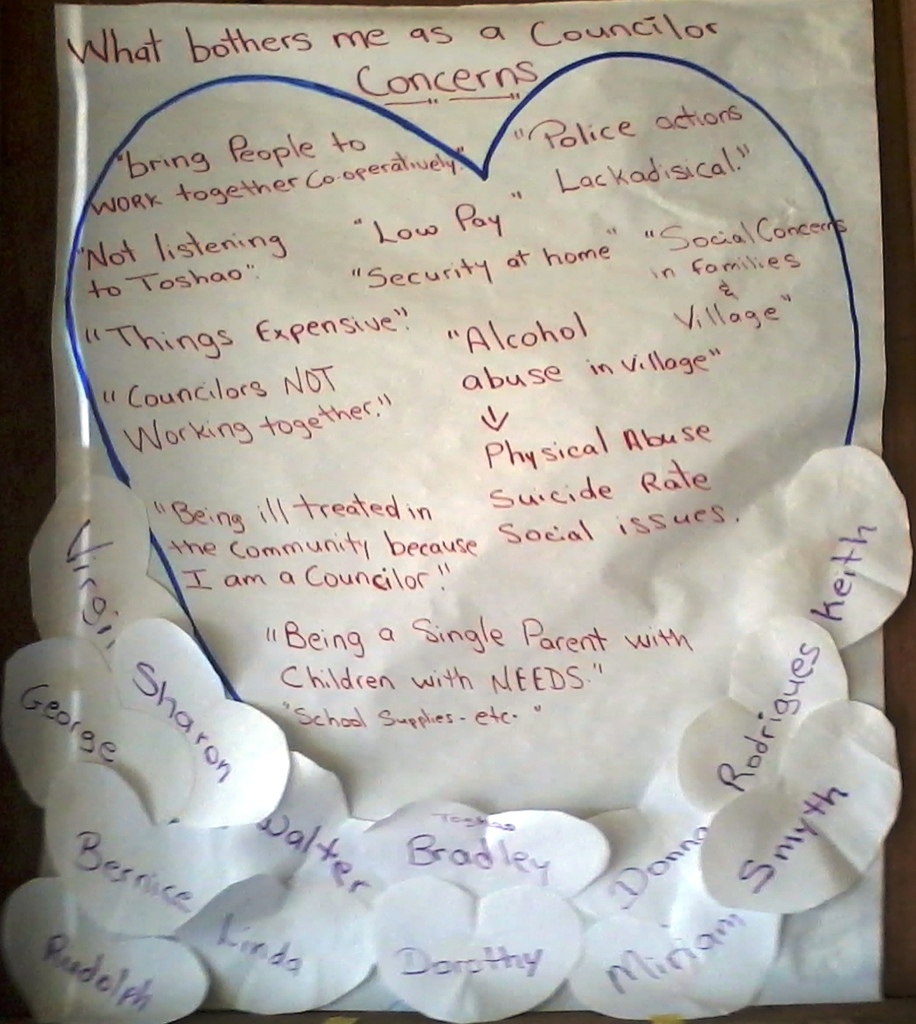 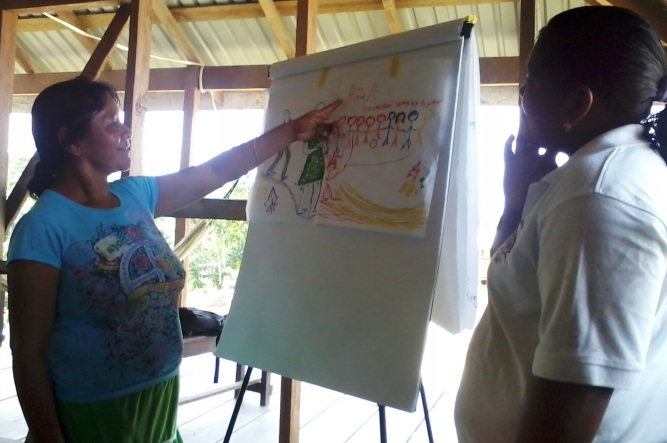 Dream being presented in carib with translator

I am happy that language was overcome by using local translator. This in itself shows the strength within the local community.