Rituu B. Nanda, The Constellation

HIV is a significant issue impacting India, especially among its migrant populations. In this short article, we describe a strength-based facilitative intervention designed to reduce HIV vulnerabilities among those groups.  This action, applying a participatory Community Life Competence approach, was developed and carried out by researchers from India Competence, a branch of the international organization The Constellation for Community Life Competence, together with a supporting NGO and the migrant communities themselves as co-researchers. 1
Our project (2013-2014) aimed to strengthen the community-led HIV response in three cross-border migrant communities in Mumbai, India with the following objectives:

Through previous work, the project had established cross-border programming, and had increased awareness of HIV and treatment among Nepali and Bangladeshi migrants in India. The initial actions undertaken here by the India Competence Team were to identify inherent strengths in the project, the local NGO team, and the community.  The India Competence Team used SALT (Stimulate, Share, Support / Appreciate / Learn, Listen / Transfer)  as a framework to develop mutual caring in protecting populations from HIV.

Over a period of 11 months, the India Competence Team had 3 distinct interactions with the NGO team to introduce the concepts, help form a dream, mentor the approach, and facilitate measurement of change. In the following paragraphs, we highlight some aspects of the process.
Community life competence. After the training, the program staff used SALT by asking appreciative questions to the migrant community such as “What are you proud of?” The community felt valued and appreciated, and was inspired to reflect on its strengths, thus increasing its self-belief.“Our strength as a Nepali community is in our unity. We come together and care for each other.”       Dream-building exercise. A dream-building exercise was then conducted with members of the Bangla-speaking community and Nepali migrants.  This helped the communities to dream about 2014, when the project would no longer exist.  Community dreams included projecting a future where HIV prevalence was much less, where those who were sick were cared for without stigma, and where the community members themselves took initiatives on HIV prevention. The community then reflected on its present situation in terms of its dreams.“As women, we have acknowledged the risk of HIV; however, our adolescents and men have not.”

From teaching to facilitation. The local NGO team changed its approach from teaching to facilitating community actions against HIV.  This indicated a belief in community strengths rather than relying only on staff capacities and provision of services.  Community action plans to achieve their dreams guided the facilitation process.“We will help the community to reflect on its current status and encourage them to work towards its dreams.  If it needs training, we would provide it.  If there are challenges, we will work to overcome them.”

The participatory action research conducted at the end of the process revealed the following changes:
Empowerment of women. Women feel empowered: “When I go outside, if someone teases me, I respond. My confidence has grown.”
Women understand risks better: “We used to cover ourselves using headscarves, were fearful to speak up, and suffered in silence when things went wrong (e.g., when husbands used to drink and abuse). Now we speak up and engage in outside issues.”
Women are openly talking to husbands about HIV. They are no longer shy, but rather encourage others to go for HIV testing. Women have also begun to negotiate condom use with their husbands:  “I have told my husband that he has to use a condom when he visits sex workers. I never dreamed that I could tell him that. He has begun to listen to me.”
Women discussed how they are protecting others from contracting HIV: “Earlier when homeowners used to harass the domestic workers for sex, women used to get angry and walk out.  Instead, we are now educating our employers that HIV can be transmitted via unprotected sexual contact.”
Care of people living with HIV (PLHIV). The community attitude towards PLHIV has changed from stigma to compassion. Community members now take the patients to hospitals and care for them: “We have to take care, so that he or she does not feel discrimination related to HIV. Henceforth, we will not discriminate on the basis of HIV.”
Access and adherence to treatment (for HIV, TB, pregnancy, and STDs).  Now several men in the community are providing information to other men regarding where treatment is available for HIV and TB: “Very few men are engaged, and if no NGO will come we will have to do something ourselves.”
Identifying, recognizing, and addressing vulnerabilities (alcohol abuse, sex work, sexual harassment at the workplace, and domestic violence):“We are concerned about HIV risk, for the sake of our children.  Therefore we have done HIV testing.” (Three out of four men have had HIV tests.)
What Will Happen After the Project Ends?
Communities have expressed a strong desire to keep the HIV program alive even after the project comes to an end: “It’s our duty after the project to take action on HIV in the community. Two out of three men in the community are volunteers providing information on HIV; we hold monthly meetings on HIV; alcohol consumption has decreased.  After the project, we would continue to work on this.  We will set up a committee that can check on issues such as alcohol abuse, domestic violence, etc.”
Transfer of vision, actions, and strategies. Communities said that they have begun to share their experiences at their workplaces, and with friends, relatives, and other communities, because they are excited about their response to HIV: “Now we can speak openly, and we are no longer shy; we have realized that HIV is a disease. If we keep quiet now, we leave others around us at risk.”
Communities drew maps to indicate where they had transferred their experiences and visions around HIV: 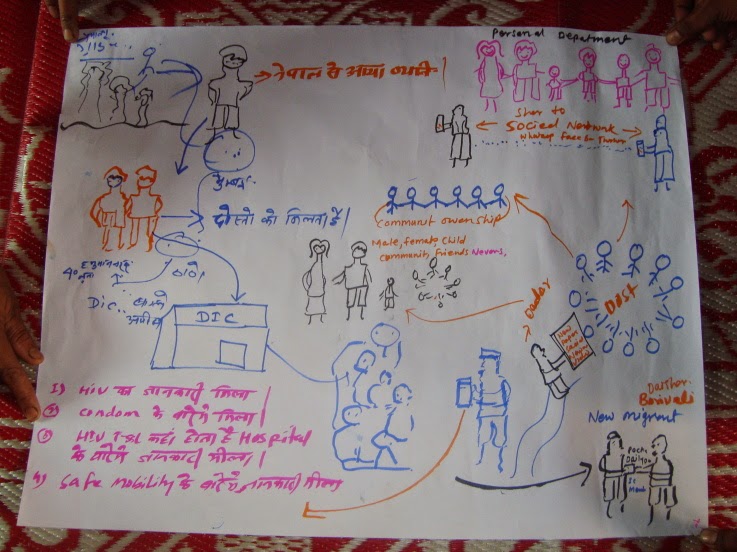 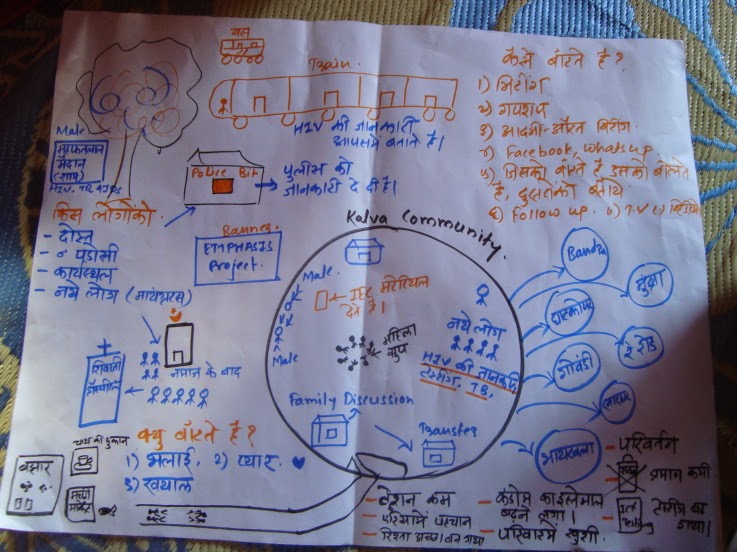 Research on public health programs, particularly HIV, has shown that providing services and information alone will not work. Behavior change can come about if communities recognize that an issue is of concern to them. Our project demonstrated a way to do this.
Traditional “deficit” approaches focus on the problems and weaknesses in a community. They design services to fill gaps and fix problems. As a result, the community can feel disempowered and dependent; people can become passive recipients of services rather than co-participants. Therefore, community life competence, a strength-based approach, particularly for engagement of migrants who often helpless and ignored, can help community members realize their strengths. As one of the project coordinators reflected: “It is all about power, letting go, the belief in the potential of the community. It is the NGO that has to change.”
The local NGO team was quick to acknowledge the capacity of the communities to own a vision and respond to their challenges.  This helped the staff initiate appropriate actions to facilitate a community response.  The communities responded by vision formation and action planning for a future beyond this project.
All the elements of the Community Life Competence Project as planned could not be implemented in one year.   In summary, however, the visible changes we have seen point toward the effectiveness of this approach, one which mobilizes community ownership and adapts to local conditions.
This Blog was first posted at THEory into ACTion - A Bulletin of New Developments in Community Psychology Practice
_______________
1 Community Life Competence is an approach based on the belief of the capacity of the community to respond to its concerns, measure changes, and transfer strengths to others. More information can be found at www.communitylifecompetence.org, where it is also possible to join their online community. Care India invited the Constellation team based in India to engage with the migrant community for the EMPHASIS Project (Enhancing Mobile Populations’ Access to HIV & AIDS Information and Services).

A key factor in what we were able to achieve was the deep faith in capacity of communities among all actors involved - ie you as the team leader of the project, Care staff and NGO partner staff. Each team mate played a critical role and contributed from their heart. Thank you Nabesh for accompanying us throughout.