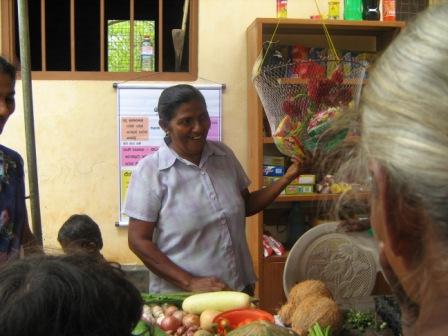 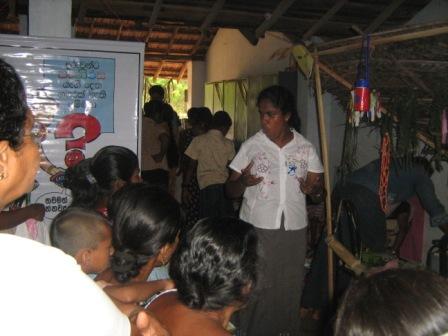 A health promotion project was started in June 2008 out of the funding received from the Norwegian Church Aid, with 10 disempowered communities in Tsunami struck Hambantota district in Sri Lanka. During usual monthly meetings of various village-based societies, the topic of health was discussed as achieving of well-being rather than the mere absence of disease, making communities to realize their own potential in taking control over and in improving their health. This made them more engaged in learning and improving their own health. Two community health facilitators trained by a trainer from the Foundation for Health Promotion, Sri Lanka facilitated the process in each community. After a few month's work, men and, especially the women who participated in the process felt that their well-being and that of their families have improved significantly. They wanted to share the experiences with the others in the community. They proposed health promotion camps. Health promotion camp was a collection of interactive stalls where, for example BMI of everyone in the village was measured; enabled participants to do healthy shopping through a stall mocked as a village grocery store etc. Resource persons were members of the community who had furthered their understanding and skills in all these areas. A team of one village would be the resource persons for the camp in another village. After one such camp, Karuna- one of the resource women, was sharing her experiences with the others in the resource group regarding another resource woman: “I saw, after Anula finished her interactive session on what a mother can do to improve her own child’s cognitive development, the PHM1 of the area came to her. She called Anula “miss”2, without knowing obviously what she was, and told her that she has a group of mothers in another village to which she wanted Anula to do the same session she did today. I know that she first felt embarrassed to be called “Miss” by a PHM and at the same time was very proud of herself”. Then the other women agreed: “we used to be no more than housewives and never realized the potential we had in ourselves to initiate improvement in the lives of ourselves and others around us” They have started to spread this campaign even out side their District. They have conducted a similar camp in Ampara District, about 200 km away from their home towns.

Thanks a lot for sharing this story of Karuna :) (which means compassion in Thai).
I truely believe that individuals, families and communities own their own well-being, whether it is health or happiness.

Have you also seen Jean-Louis's posting on Primary Health Care?