Building the Dream: An example of its power and a reflection on a problem.

Earlier this month, I was fortunate enough to take part in a Constellation workshop organised by Belcompetence in Brussels. During Friday afternoon and Saturday a wonderfully diverse group of about 30 people introduced themselves to the AIDS Competence process.

There were many things I could write about the weekend, but this note is about Building the Dream, the first step in the Constellation process. I thought about writing it immediately after the weekend, but I decided to give myself some time to let the experience sink in.

For the exercise, the workshop participants had divided themselves into 3 groups of about 10 people. During this part of the weekend, I was definitely a participant. Our group was gently facilitated by Eric Ngabala.

There was one slight 'quirk' in the setup of the groups. Our group had selected itself on the basis that we were the ones who had built their personal dream in a way that was oriented towards text, rather than images. So, here as an example is my individual dream. The details of the text aren't important, it is the layout that I want to emphasise. This wasn't about neat lines of text. For me, I drew a mind map and then drew out 2 important threads from the map. And so we each exchanged our dreams. People listened and reflected on what was said. And as the conversations evolved people started to draw out consistent messages.

But we were then challenged to put something on the flip chart. What were we going to present as our Dream to the whole group?

I don't remember how the idea surfaced, but I do remember that the group wanted to emphasise was that we would be as one, that Belgium would be as one. (The discussion had revolved around the diverse ways in which Belgians did not feel they were as one. The conversation could have gone on for a long time.) We agreed that we would all put our hands on the big sheet of paper and we would have the outline of our hands arranged so that they made one large ring.

So we looked at that and we felt good. And then someone said that each of us should take the single word that we had taken from the conversation and that we should put those words around the ring. That took quite a lot of conversation but this is what we produced. 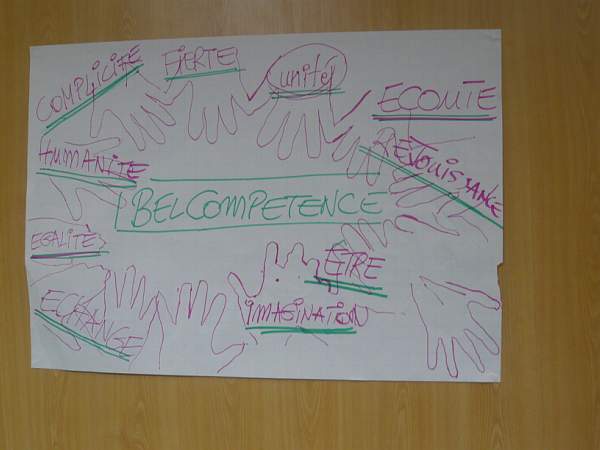 So here are some reflections on this process:

1. For me, this is an extremely motivating image. I look at it and am immediately taken back to that discussion. The ring of hands symbolised the unity of the group in (for me, again) a powerful way. I can take myself back to the room and to the group of us kneeling on the floor of the room with our hands spread around this piece of paper. And someone had to find a way to trace the outlines of our hands onto the paper.
2. I had introduced Usa's question into the group. "Are we human?" (I am sorry Usa, but that is now how I think of that wonderful question.) And I certainly see that ring of hands as a statement of our common humanity. That ring of people kneeling around the sheet of paper is a fine illustration of diversity, and yet our common humanity is crystalised by that ring of hands.
3. The individual words are (again for me) powerful triggers to recall the conversation and the commitment with which individuals spoke. They represent a sense of unity far deeper than the words themselves convey.
4. There was a lot of energy for taking each of those words and crafting a paragraph to illuminate what we had said during the session. That document would serve as a very powerful statement of what our dream meant. And I have no doubt that this could would provide us with links into the Self Assessment.

So here is what I learned about 'Building the Dream':

1. This is a remarkably powerful process. I was in the middle of a group of people and I had known only one of them for more than 24 hours. And yet in half an hour (maybe an hour, I don't know), we had created a very powerful statement of our dream and we had characterised that with a very powerful 'statement' on a piece of paper.
2. I have consistently and persistently tried to make a distinction between the visual and the verbal in this process. That is not a valid distinction and is indeed a misleading distinction. Both the images I've produced here are strongly visual and they both are strongly verbal. Both images contain lots of words. But I 'see' both as images

And here is my worry about the process

* There were 3 such dreams produced in the room that afternoon. You can see how strongly I have taken ownership of what our group produced. So how do we pull the three dreams into a single entity that holds us all together.? This is the third time that I've been part of this step in the process with the Constellation and on each occasion, we have failed to produce a unified dream which held the whole group together.

I am struggling to convince myself that any 'unified dream' that unites the 3 groups present that afternoon will not dilute the power of the dream that we produced in our small group. I've thought this before and with this experience my concern is even greater.