Your experience on "practices" for self assessment!

Practices. You know, that sometimes tricky-thorny part of the CLC Process that comes right after the dream and before diving into the self-assessment? 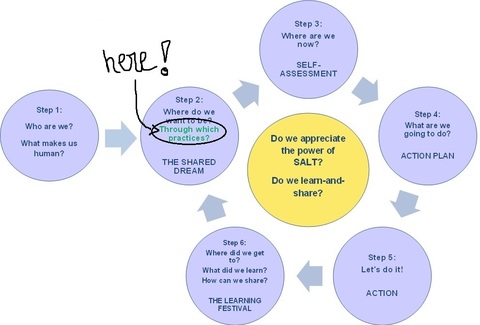 Well, the global support team of the Constellation is thinking of bringing more attention to it by adding it as a separate step between the dream and SA. 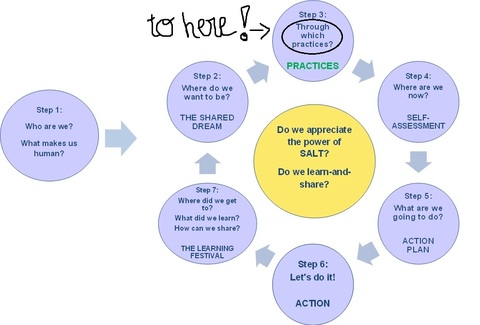 As we are thinking of giving more weight to this step, we want to learn from you!

SALT and the CLC Process have always been alive and changing as we learn from experience, please share yours below :) !

Celicia on behalf of the Global Support Team.

Hi dear community, please have a look at what Lysiane shared about her experience.

She have an interesting experience of facilitating the Practices. She shared that she never manage to facilitate the dream building before the practices. She always use the practices as way to stimulate the conversation between the group and then ask for a materialisation of the dream by a drawing, a narrative or even a prayer.

Do you have such experience? Please share you experience if you also facilitated the process the other way around (practices first and then dream building).

Here is the experience she shared translated by Phil, please share you though and relevent experience to help us determine how to include this step in the entire process.

"I wanted to respond to Laurie's and GST's request for facilitation experiments in the practice stage. For my part, it has been a very short time that I have facilitated the process, but since I did the online training I had the opportunity to accompany some groups. And after a discussion with Laurie I realize that I have to share my experience and that this can eventually advance thinking around the place of the practice stage in the process.

I have never managed to derive the practices from the dream. The step of surfacing the practices has always come before the common dream. It is a step to go from the “I” to the “We”.

I will explain here how I adapted the process to meet the needs and the expectations of the groups I have been working with.

Since my involvement in the triads of the SALT Online Program, I have accompanied a group of people who are embarking on the transformation of a Bio Cooperative into SCOP (I think that this is something like a co-operative in England PF). This is the store of L'Epine Vinette in Briançon. When I proposed to accompany them with the CCV process, the group was questioning their identity and their dream for the future.

For the formulation of the dream and the practices I have adapted the process somewhat to allow a co-construction and a real ownership of both the process and the project.

For the dream I started by making the individual dream. Following this they did an active listening exercise in pairs. The person who listened to the dream of the other then presented the dream of his teammate in plenary.

During this time of presentation, there was a reporter who noted each idea of individual dreams on a post-it note. We ended up with a series of post-it notes on the wall (see opposite)

Then, the post-it notes were grouped together around common themes.This stage took a long time and the participants' feedback was quite negative on this stage. Nevertheless, I drew on the small amount of energy still present to ask the group to formulate practices on the basis of the identified themes and the words mentioned in the post-it notes.

I have guided the group to formulate practices in the following form: WE + Action verb.

6. We mark our differences;

At this point, we did not yet have a common dream. I wanted to ensure that the common dream could be formulated in an artistic and creative way. So I involved a friend of mine, art therapist with whom we imagined a process to achieve a common achievement that uses visual and plastic art.

From the post-it dreams of each one, they were offered to make a vignette (an image or a kind of storyboard) using the artistic support of their choice (painting, collage, sewing ...).

In groups of three, each group working on 3 practices. For each practice they referred to the words of the post-it to realize the vignettes. Each word was represented by a thumbnail (image or storyboard).

In a circle, the members of each group presented to the others their realization and the sense of the images represented.

A month and a half after that, we met again to continue the co-construction of the common dream.

We picked up the vignettes and we were immersed in the context and meaning of the images.

They were then asked to classify the vignettes in a narrative order that allowed them to tell the story of their dream.

During this process, they immediately referred to the tree as order of presentation, with the roots and history of the project, trunk and branches. (See image next page)

I asked them to write the story, they wrote a  text that they then wanted to declaim in music.

Throughout this process, Sophie filmed and captured sounds.

The next step is for us to edit the film.

Since then I have reviewed them to do the self-evaluation.

I invited them to take up the practices developed previously and see if they always matched their dream and if they still made sense today. Some have disappeared, others have been modified because they realized that it was more values ​​than fields of actions for the sequel.

They were able to identify 5 practices:

- We mark our difference;

- We cultivate the land and the land cultivates us.

In plenary they explained what they were putting behind these practices for a better common understanding. Then they self-assessed themselves where they currently are.

I have another pretty similar experience with facilitation practices.

I realize that I have never managed to facilitate the common dream before practices.

For this second experiment, it is a group of a federation of parishes of Briançon.

This group was uncomfortable with the idea of ​​drawing, which he found too childish.

I am asked to share their individual dream by two and in plenary the listener presented the dream of the other.

On a chalkboard I noticed the ideas that came out of their individual dreams.

We had before us a set of ideas. I noticed every idea on a post-it and we then grouped by generic themes that emanated from these ideas.

From there, I encouraged the formulation of practices in the form: We + Word of Action.


The group was able to formulate 6 practices.

For some participants it was difficult to understand the meaning of this stage.

From then on, I proposed to them to materialize their dream by a text or a prayer.

They found the idea super and wished to make a prayer that they could say during the mass that followed the meeting.